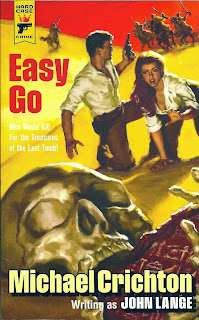 As most of you know by now, Hard Case Crime has republished eight of Michael Crichton’s early novels, all of which were originally issued under the pseudonym of John Lange. Of these eight, I had previously read Binary without knowing that Lange was Crichton. Naturally, I bought all eight. I chose Easy Go as the first to read and review because it’s a thriller involving Egyptian tomb robbers. I expected plot twists, and I wasn’t disappointed. Easy Go is fairly standard material, with strong characters and pages of suspense. Elements of Crichton’s later style are evident, namely his meticulous research on various locations and scientific techniques, all handled with his usual flair. There is more than a touch of the travel writer here, which made me wonder if Crichton had actually visited Egypt or took his material from research. Easy Go was first published in 1968, long before Crichton had made his name and fortune. In any event, Easy Go is an entertaining page turner. Harold Barnaby has deciphered ancient hieroglyphics that reveal the location of the last un-plundered tomb in Egypt. To reach the treasure he enlists the aid of a journalist named Robert Pierce who exploits his connections. They locate the general area, conduct a search, find the tomb, and work hard at getting inside. This takes the first 180 or so pages. There are some suspenseful complications afterward and a satisfactory ending, depending on your personal taste. I’ve read most of Crichton’s later work, and Easy Go ranks just shy of the middle-range. It’s basically a traditional paperback thriller. That’s pretty good and I recommend it. Also available from Hard Case Crime are the titles: Odds On, Scratch One, Zero Cool, The Venom Business, Drug of Choice, Grave Descend and Binary.
Posted by Thomas McNulty at 11:44 AM