The Magic Power of Witchcraft by Gavin and Yvonne Frost 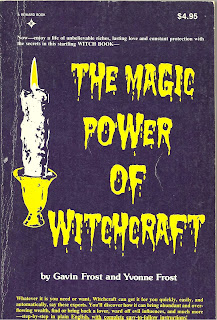 Witchcraft and its association with Halloween is perhaps more of a modern contrivance to sell products and has little connection to ancient pagan practices. What is now known as the Wiccan religion today was fundamentally a secret society of few devotees until the English parliament declared witchcraft laws obsolete in 1951. Gerald Gardner published Witchcraft Today in 1954, an authoritative text on Wiccan practices. Gardner supported the belief that Wiccan practices, were the historical systems of an ancient religion that pre-dates Christianity. That has been the basis for most Wiccan groups and practices since. When Gardner died in 1964 There was little systematic effort to organize covens and create a legitimate foundation for Wiccan practices as a unified group. This would change with the efforts of Gavin and Yvonne Frost in the late 60s and early 70s who are credited with founding the modern Wiccan movement. When Gavin and Yvonne Frost published The Magic Power of Witchcraft in 1976 they were immensely popular and this book went far in cementing their reputation as leaders of the new movement. The book is easy to read and offers numerous practical exercises for those interested in both understanding modern Wiccan practices and improving their lives. The authors make it clear that Witches today are “practicing neither black nor white witchcraft but using these powers as their own consciences guide them.” Each section contains story examples and analogies that illuminate certain approaches to self-fulfillment. The core of the book explains basic ritual practice combined with an individual’s self-motivation to overcome life’s obstacles. In this context, Wiccan practices are similar to Buddhist principals. Topics include improving rapport and visualization, handling friendships, romance, financial success and achieving life’s goals and numerous others. I understand this book remains in print. Mark it down as a must-have for your personal occult library.
Posted by Thomas McNulty at 6:28 PM