Dracula in Love by John Shirley 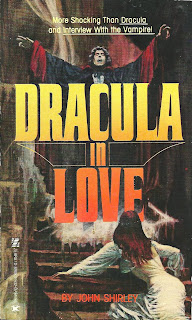 Bram Stoker never intended for his famous vampire to become an industry, but he has, and there’s no end in sight. Dracula is here to stay. Dracula in Love was John Shirley’s first book, published in 1979 by Kensington Publishing. As usual there is no resemblance to Bram Stoker’s original vision of Dracula, and that’s the way it should be. Most fictional reincarnations of the famous Count probably owe more to the Bela Lugosi film version than anything else. Shirley’s Dracula is one wacky dude; this is an over-the-top nutcase Dracula. When Vladimir Horescu receive a letter signed by Vladislav Draco II, Son of the Dragon, AKA Dracula, he knows his life is about to change dramatically. After all, Dracula states: “My Son! Know me: I am your father.” Uncertain how to proceed, Vladimir does some soul searching, but eventually decides to meet the man that he does indeed believe is his father. This takes 100 pages, but when Dracula finally makes his appearance the book gets even weirder. This is a Dracula who resembles a good looking talk show host. Dracula can blow figure eight smoke rings and chastises Vladimir for speaking with Lucifer who now goes by the name of Bill. Yeah, really. He also tells his son “We’re going to fish for mermaids and keep the beast of Loch Ness as our pet.” As you might expect, this is no traditional father-son bonding story. You see Dracula is in love with Margaret Holland, Vladimir’s friend. Not to forget, Dracula is one ruthless bastard. He is merciless and willing to kill at a moment’s notice. His extraordinary powers make him seem god-like. The ensuing conflict is weird, violent and disturbing. Spoiler alert! - The conclusion, wherein Dracula is consumed by a vagina, is the number one wackiest horror story ending in history, and perhaps one of several reasons why this book has a cult following. John Shirley is an excellent writer, and still produces great stories like this one. I think his latest story can be found in Paula Guran’s anthology, Halloween: Magic, Mystery, and the Macabre. Check it out.
Posted by Thomas McNulty at 6:28 PM