The Elephants of Shanghai by Stephen Jared 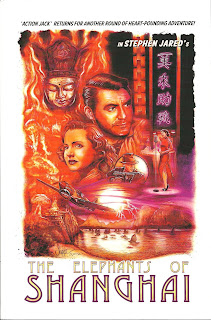 Stephen Jared’s The Elephants of Shanghai is his third novel and a direct sequel to Jack and the Jungle Lion, a critically acclaimed New Pulp “romance of adventure.” While it’s not necessary to read Jack and the Jungle Lion first (it can read as a stand-alone tale), I would certainly recommend doing so if you are encountering Stephen Jared’s work for the first. In fact, Solstice Publishing reprints Jack and the Jungle Lion as the opening salvo in this splendid double-barreled pulp adventure. To recap that first tale, Jack and the Jungle Lion opens in Hollywood in 1937. It’s about a film actor named Jack Hunter who is cut from the same cloth as Tyrone Power, Clark Gable or Douglas Fairbanks, Jr. In route to a location shoot his plane crashes and Hunter finds himself trapped in the Amazon rainforest with animal trainer Maxine Daniels and her two children, as well as the irascible co-pilot, Clancy. Surviving is not going to be easy and Hunter needs to become the hero he’s played on screen in order to get home safely. But can he handle the role? Jack and the Jungle Lion received rave reviews. The Elephants of Shanghai takes up where Jack and the Jungle Lion left off. It’s five years later, 1942, and the world is at war. Disguised as Jack Whiskers, Hunter has infiltrated the mob where spies are as plentiful as vice. When Jack goes missing it falls to Maxine Daniels, Hunter’s lover, to track him down. The trail leads to Shanghai, and what follows is quite reminiscent of a 1930s action-melodrama that might have been based upon a pulp magazine story. The Elephants of Shanghai is every bit as entertaining as its predecessor, and then some. Stephen Jared is a fine writer; his prose crackles with witty dialogue, the action remains on full-throttle, and lovers of thrills and spills in fiction will savor every page of this immensely enjoyable book. With jewels known as “The Elephants of Shanghai” and spies, action, and a mysterious woman, this book is destined to make the years top ten lists in the New Pulp category. The cover is by Paul Shipper and the Solstice books are edited by Nik Morton.

Writers of the Future Volume XXIX 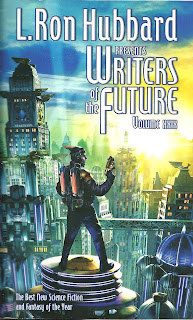 Yes, you can judge a book by its cover. Writers of the Future Volume XXIX features a breathtaking cover by Stephen Youll titled “Retro City.” Take a good look. There’s a little bit of Flash Gordon and old fashioned pulp. The adventurer poised on some futuristic/retro rooftop is holding a ray gun and sporting an aviation helmet. The jetpack on his back says it all. Now look at the detail of the cityscape. I want to be there, and so do you!

Such magnificent covers are not unusual for the Writers of the Future, now entering its 30th year. Previous artists such as Frank Frazetta have offered eye-splitting covers for several of these anthologies. Best of all, this contest works in tandem with the Illustrators of the Future contest and the stories are illustrated with work by the winning contestants. The winners for this 29th volume are John Eno, Joshua Meehan, Luis Menacho, Olivia Xu, Daniel Reneau, Jackie Albano, Aldo Katayanagi, Sida Chen, Karsen Slater, James J. Eads, Lucas Durham and Tiffany England. All of their wonderful illustrations had another depth of quality to this book.

As expected, the stories are all top-flight entertainments. “War Hero” by Brian Trent kicks the anthology into high gear with this outstanding tale about vengeance and warfare. A few slight-of-hand plot twists and really solid writing make “War Hero” a splendid piece of science fiction writing. Next up is “Planetary Scouts” by Stephen Sottong, a hard-hitting sci-fi tale that had me mesmerized from the first paragraph. Two scouts are sent to distant planets to report on the possibility of discovering intelligent life, and quite often surviving the expeditions can be hair-raising if not fatal. Tina Gower’s “Twelve Seconds” is the third straight science fiction story and equally as good as the others. Except “Twelve Seconds” is also a nifty mystery tale. An autistic man named Howard works at processing memory siphons in order to help solve homicides. But Howard uncovers a series of deaths that require additional investigation.

With three superb stories opening this anthology I wondered if the quality would hold up as I delved deeper. I needn’t have pondered such a foolish thought. The next three tales were equally as mesmerizing. Christopher Reynaga’s “The Grand Complication” turned out to be a favorite; a beautifully written tale where time is out of place and needs to be fixed. “Cop for a Day” by Chrome Oxide is a futuristic story where Mark Rollins is called upon to work a day for Amalgamated Security; and “Gonna Reach Out and Grab Ya” by Eric Cline put me at the halfway mark in this outstanding collection. Cline’s story is a riveting page turner that will change the way you think about autopsies.

That brings us to “Vestigial Girl” by Alex Wilson which puts a unique and fresh spin on childhood. You should read this one slowly, and savor every word. “Holy Days” by Kodiak Julian tackles life and death so brilliantly that I read the story twice. This is another perfect story in what is obviously now a perfect anthology. “The Ghost Wife of Arlington” by Marilyn Guttridge had me intrigued just from the title. The story matches that title perfectly; a love story with a delicious gothic twist and one that you will remember long after setting the book down.

The last four tales round out this 29th volume with acute craftsmanship. “Everything You Have Seen” by Alisa Alering brilliantly offers a discovery of new worlds amidst the destruction of war; “Scavengers” by Shannon Peavey is a remarkable fantasy about deception and truth; “Dreameater” by Andrea Stewart is a chilling gem about a daughter who fears she may be too much like her lethal mother. The final story, “Master Belladino’s Mask” by Marina J. Lostetter, magically explores a healer’s gift in the form of a mask that holds his consciousness. This great tale concludes the 29th volume of Writers of the Future. The journey is worth your time.

Email ThisBlogThis!Share to TwitterShare to FacebookShare to Pinterest
Labels: Fantasy, Science Fiction, Writers of the Future 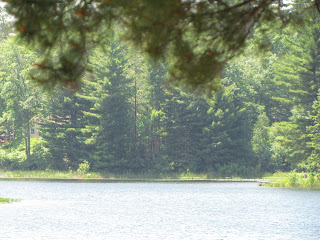 My wife Jan and I spent the Independence Day weekend at Camp McNulty in the northwoods. This is a place where the wind blows through the tall pines like a song. The wild call of the loon and the soaring wings of an eagle are commonplace. 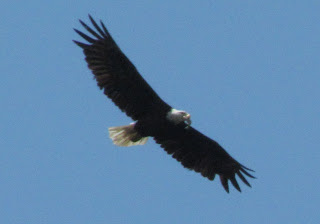 I took this photograph of an eagle above Camp McNulty on July 4th just moments after it took a fish from the lake. Later that afternoon on the Ojibwe Reservation two young eagles landed in a tree on the shore of Lac du Flambeau. We stopped the truck, jumped out and took these photos. I cannot think of a better image for July 4th than that of majestic eagles in their natural environment. 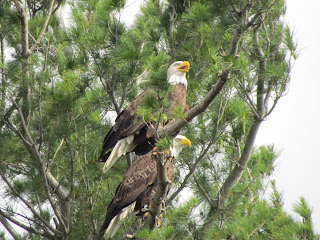 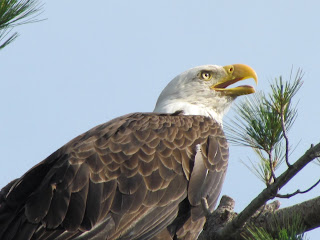 Driving through the Chequamegon National Forest we spied this porcupine feeding on lily pads. 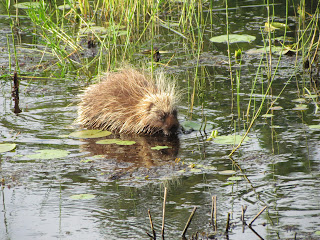 Life in the northwoods can be challenging but tranquil too. At sunset the wind brings songs to the pines and the light is ever-changing. The spirits of explorers and early settlers are but a step away. The forest changes in late afternoon. The colors deepen as the shadows crawl out from beneath the underbrush. The pines and the wind are conspirators at twilight, telling stories of days past and greeting the future with a lullaby of whispers. 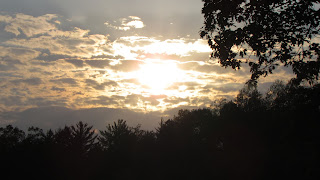 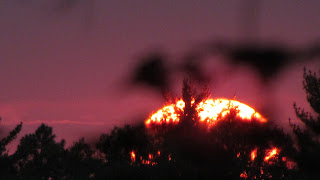 Posted by Thomas McNulty at 2:17 PM No comments: 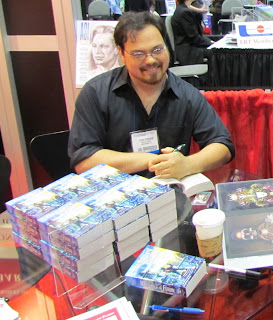 I was fortunate to meet Illustrator of the Future winner Lucas Durham at the American Library Association Annual Conference in Chicago this past weekend. Lucas won for his illustration that accompanies author Andrea Stewart’s story “Dreameater.” The story and artwork appear in Writers of the Future Volume XXIX which I will review in full soon. 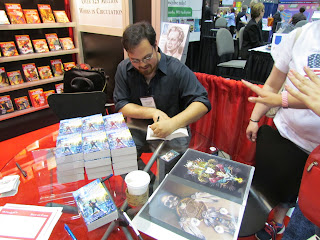 They were lined up for hours and Lucas must have a sore hand from all the autographs I saw him sign. The line seemed endless.  He’s a gentleman and a real pleasure to talk with.

Visit his blog HERE!
Visit the Writers of the Future HERE!
Meanwhile, here are some examples of his award winning illustrations.
All images copyright © 2013 by Lucas Durham. 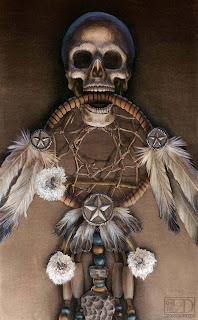 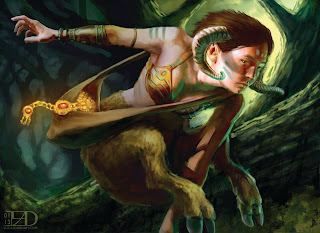 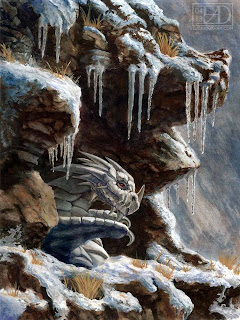 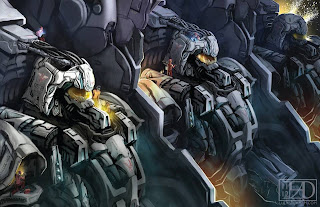 Posted by Thomas McNulty at 7:33 PM No comments: