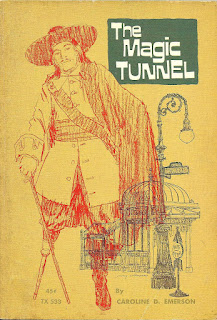 I ordered this book through my Elementary School’s Scholastic Book Club in 1965. I recall vividly studying the copyright page. Originally published in 1940, I wondered then as I do now what ever happened to Caroline D. Emerson? This is a time travel story and I read it about the same time as The Time Machine by H.G. Wells. The Magic Tunnel is an easy book to read and I was captivated by peg-legged Peter Stuyvesant. The plot is simple enough: Sarah and John take a subway ride and suddenly find themselves transported to 1664 when New York was New Amsterdam. Books like this for young readers offered a dash of history and a dash of suspense. With illustrations by Jerry Robinson, I also wonder why Scholastic Books doesn’t keep great titles like this in print. Sarah and John’s effort to return to their own time is mingled expertly with a capsule history lesson as Peter Stuyvesant makes a crucial decision when the English take New Amsterdam from the Dutch. The history isn’t forced down your throat and the story mixes fact and fiction for an enjoyable read. A favorite from my childhood, The Magic Tunnel still retains its power to captivate and entertain.
Posted by Thomas McNulty at 6:37 PM No comments: 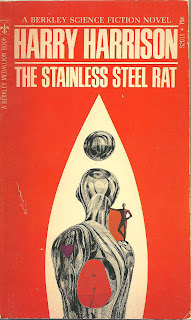 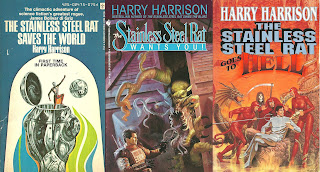 Posted by Thomas McNulty at 6:43 PM No comments: 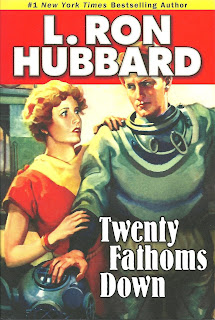 Twenty Fathoms Down is another reminder that our vast cultural history should be preserved for future generations. This nifty pulp tale was published in 1934 in Five Novels magazine. In many ways it is typical of the pulp era; a short novelette with a romantic angle and a stalwart hero; but it also features some fine writing by L. Ron Hubbard whose work is receiving positive attention from scholars and pulp fans alike. These reprints of Hubbard’s work by Galaxy Press are themselves collectors items. In the recent batch of releases (The Devil-With Wings, Gunman’s Tally, Red Death Over China) I think this one is my favorite. Deep sea diver Hawk Ridley (I love that masculine, hardboiled name) has discovered a sunken Spanish galleon bearing millions in gold. But just before diving on the wreck Ridley and his crew discover a stowaway is aboard – Vick Stanton, daughter of his rival. Ridley isn’t convinced the girl’s sudden appearance isn’t part of a set-up to foil their plans, and the situation becomes deadly as they lose a crew member under mysterious circumstances. And the discovery of some rare emeralds suddenly turns this adventure into a deadly cat and mouse game with everything at stake. Hubbard’s natural talent as a writer is evident in the prose; and the flourishes he adds are a delight. For example, Both Ridley and Vick enjoy deep sea diving because it opens up another world; a world of mystery and beauty. “It’s the kick you get out of it.” Hawk tells Vick. “You know what I mean. It’s rather grand.” And Vick understands her man perfectly. “I know. It gets you.” She tells him. But the sea is also dangerous, and this is, after all, an adventure story. Peril awaits Hawk Ridley at every turn: “It was a strange world of blackness, where trees waved slowly and gently and unsuspected hillsides rose up and fell away with appalling suddenness.” Twenty Fathoms Down is a fine piece of adventure writing by L. Ron Hubbard. Galaxy Press is at about the halfway mark in this landmark reprint series and Twenty Fathoms Down is all the evidence I need to continue reading.
Posted by Thomas McNulty at 5:03 PM No comments: