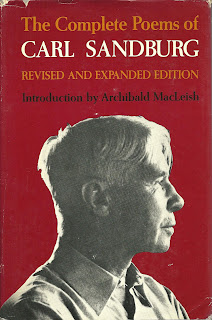 Celebrating National poetry Month
Now it’s time to consider Carl Sandburg. This is not a task that should be taken lightly. It is not currently fashionable to read Carl Sandburg. The academic community dismisses him too easily and certain factions of the cynical public have failed to grasp both the depth of his talent and his relevance. I sing the praises of Carl Sandburg and in so doing I have marked myself. So be it.

Let us begin with his newly discovered poem, A Revolver, which made headlines in January of this year. The poem was discovered in the manuscript collection housed at the University of Illinois by retired professor Ernie Gullerud who had volunteered to help index the material in the Sandburg collection. A Revolver is a short (16 line) poem typed on onionskin paper. This is the full text of the poem:

Here is a revolver.
It has an amazing language all its own.
It delivers unmistakable ultimatums.
It is the last word.
A simple, little human forefinger can tell a terrible story with it.
Hunger, fear, revenge, robbery, hide behind it.
It is the claw of the jungle made quick and powerful.
It is the club of the savage turned to magnificent precision.
It is more rapid than any judge or court of law.
It is less subtle and treacherous than any one lawyer or ten.
When it has spoken, the case can not be appealed to the supreme
court, nor any mandamus nor any injunction nor any stay of
execution come in and interfere with the original purpose.
And nothing in human philosophy persists more strangely than the
old belief that god is always on the side of those who have the
most revolvers.

The media reports regarding the discovery of Sandburg’s poem coincided with another of America’s mass shootings; a horrible event where dozens of children were murdered by yet another deranged man the psychiatry community had failed to help. Most of the Internet reportage was brief and often misleading. One writer stated that Sandburg is best known for his six volume study of Abraham Lincoln and that A Revolver was “more polemic than poem.” Those are false statements. Sandburg is know today for Chicago Poems (1916) which remains in print. His subsequent poetry is coveted by the literati and garnered him higher acclaim than his many works related to Lincoln. This is not to slight the Lincoln canon, but Sandburg’s poetry is a force to be reckoned with.

As for A Revolver, little is known about it. The poem is undated so everything we say is speculation. I think it most likely fits into the “War Poems” sequence he wrote between 1914-1915. Others have speculated that it relates to his study of Lincoln’s assassination. Polemic relates to disputation and while there is a hint of that I still view it as an exercise in understanding. Sandburg is stating the obvious, putting it out there as a statement of observation. It is not a great poem but it has a few great lines. If indeed he wrote it for his “War Poems” sequence then we know he declined to include it, and I agree with that decision. A Revolver doesn’t quite work as well as those poems he finally chose to publish. All of this, again, is speculation. Speculation is fun and can lead us into some energized discussions over a pint of Guinness.

The son of Swedish immigrants, Sandburg was born (1878) and raised in Galesburg, Illinois. He wrote editorials and reviews for the Chicago Daily News from 1918 to 1933. When Chicago Poems was published in 1916 he was forever linked with Chicago’s literary community along with Sherwood Anderson, Edgar Lee Masters, Vachel Lindsay, Edgar Rice Burroughs, Ernest Hemingway and James T. Farrell. He wrote about many topics until his death in 1967. Sandburg wrote about life as he encountered it. The topics of his poems ranged from a description of a red-headed waitress in a diner, harbor fog, birds on a telephone wire, skyscrapers, sunsets, hoodlums, cornfields and so many “Starlights of cool memories on storm paths.” (from Haze) Sandburg was often lyrical and his images breathtaking. He painted with words and the pages he created are alive with the people and places of the American experience. Here are but a few examples:

I was born on the prairie and the milk of its wheat, the red of its clover, the eyes of its women, gave me a song and a slogan,
- from The Prairie

Who can ever forget listening to the wind go by counting its money and throwing it away?
- from Wind Song

The stone goes straight. A lean swimmer dives into night sky, into half-moon mist.
- from Washington Monument By Night

In the evening there is a sunset sonata comes to the cities.
- from Good Morning, America

I speak of new cities and new people
I tell you the past is a bucket of ashes.
I tell you yesterday is a wind gone down,
a sun dropped in the west.
I tell you there is nothing in the world
only an ocean of tomorrows.
a sky of tomorrows.
I am a brother of the cornhuskers who say
at sundown:
Tomorrow is a day,
- from Cornhuskers

Sandburg’s birthplace in Galesburg is also his final resting place. His ashes lie beneath a rock in the garden, aptly named “Remembrance Rock” after his novel of the same name. His home on Hermitage Avenue in Chicago where he wrote Chicago Poems is a State landmark. His many books, recordings and filmed interviews are all available through various historical groups or commercial publishers. 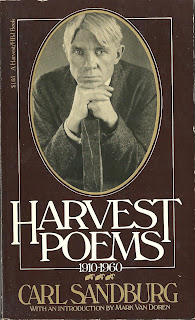 Posted by Thomas McNulty at 3:13 PM