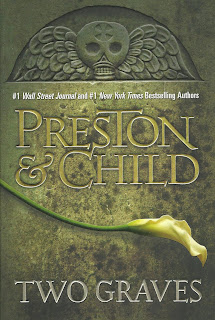 Sherlock Holmes, Sam Spade, Philip Marlowe, Mike Hammer, James Bond, Lew Archer. Those are the names of some of literature’s greatest fictional adventurers. Add the name Aloysius Pendergast to that list. Pendergast made his debut in Relic (1995) and each subsequent adventure has been a wonder to read. I’ve actually lost track of how many Pendergast novels have been published to date, but at least eleven. Authors Preston and Child have penned other books together and separately, but Aloysius Pendergast is their crowning achievement. Two Graves is really the conclusion of a trilogy so I suggest interested readers hunt down copies of  Fever Dream (2010) and Cold Vengeance (2011). Taken together, these three books should be viewed as masterpieces of detective fiction. And I think “detective” is the operative term here, although Aloysius Pendergast himself is an FBI agent. Preston and Child have written the best mystery series possible. In Fever Dream Pendergast discovered that his late wife had been murdered all of those years ago, so he sets out to discover the truth. And oh what a tangled web Preston and Child have weaved! The revelations in Cold Vengeance set the stage for Two Graves, their very best book to date. Two Graves is both the culmination of a fantastic trilogy and staging point for Pendergast’s next adventure. I can’t even imagine what that will be, and since I refuse to reveal vital plot details in my reviews, you’ll just have to pick up the series and find out for yourself. But trust me - Two Graves is a pulp fiction connoisseurs delight; it’s the icing on a bloody cake featuring literature’s most unusual (and fascinating) hero. Two Graves is really a book that you cannot afford to miss.
Posted by Thomas McNulty at 6:11 PM No comments: 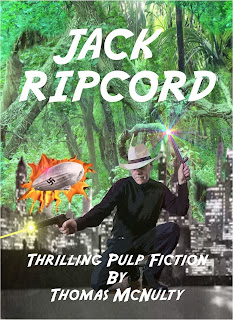 COMING SOON!
Wounded Outlaw Books presents Thomas McNulty's Jack Ripcord: The Order of the Dread Angels. The time is 1939 and the world is on the brink of war. From the back alleys of Chicago to the jungles of South America, adventurer and top government agent Jack Ripcord clashes with a secret Nazi organization known as the Order of the Dread Angels, a merciless group intent on unleashing supernatural horrors against the United States. Ripcord follows the Nazis to South America where the Third Reich’s occult leader, the Dragon, is about to unleash a demon of incredible power. Armed with a .45 automatic and an artifact called the Stonehenge Blade, Ripcord races to save the world from Nazi domination! Allied with a lycanthrope, Walter Kozak, and a witch, Trinity St. John, Jack Ripcord battles evil at every turn. Jack Ripcord: The Order of the Dread Angels is the premier adventure of a new pulp hero whose remarkable exploits are unequaled for whirlwind thrills and blood-curdling mayhem. Jack Ripcord is New Pulp Fiction for modern readers.

Three Against the Stars by Joe Bonadonna 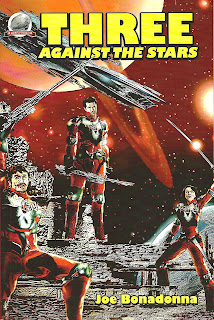 Joe Bonadonna’s first book, Mad Shadows, has been hailed a modern masterpiece by virtually everyone that has read the book, including myself. In recent months a sense of excitement has been building in the New Pulp community as readers eagerly awaited his second novel. Now Three Against the Stars has been published by Airship 27 and it’s another feather in Joe’s cap. Three Against the Stars is a rollicking Space Opera and thrill ride extraordinaire. And although I suspect some will compare it to the classic pulp era Space Operas, which is a fair comparison, this is by no means a juvenile adventure. Three Against the Stars is also a top-flight literary adventure story, well-told, superbly crafted and chock full of memorable scenes. It is far different in scope than Mad Shadows, which simply proves that Joe’s talent is limitless. He handles Space Opera with the same skill that made Mad Shadows such a  memorable sword and sorcery fantasy. Three Against the Stars takers place in another galaxy where three rambunctious members of Third Regiment Company E of the United States Space Marines get involved in exposing the nefarious dealings of a nasty group called the Khandra. Joining them is Medical Corpsman Makki Doon, a proto-feline humanoid. Seargants Fernando Cortez, Seamus O’Hara and Claudia Akira are cut from the same cloth as all of those classic pulp heroes of yesteryear, made memorable today by Bonadonna’s surefire touch. There’s a dash of the old Flash Gordon style action, and truly riveting bad guys. The battle scenes are particularly exciting, and as usual Bonadonna uses the right images with the skill of a chef preparing his main course. Prepare yourself for a thrill ride in a universe where “the guards gobbled up the spilt brains and then ripped open chests and rib cages to get at the still-warm hearts.” (p, 33) This is slam-bang hardboiled pulp entertainment!
Posted by Thomas McNulty at 7:04 PM 3 comments:

The Destiny of Fu Manchu by William Patrick Maynard 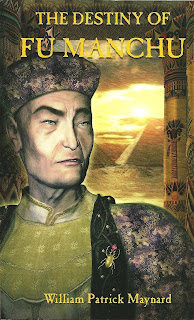 The Destiny of Fu Manchu is Bill Maynard’s eagerly awaited follow-up to The Terror of Fu Manchu which marked the first authorized adventure based on Sax Rohmer’s characters in over twenty years. The Terror of Fu Manchu was hailed as an instant classic by reviewers across the country (including this one). Bill had suddenly established himself as the best choice to follow in Rohmer’s footsteps. Of course it helps immensely that Bill Maynard is an incredibly talented writer. Anything he writes is certain to be well-received. I was thrilled when I received my copy of The Destiny of Fu Manchu because I knew immediately it was going to be good. And naturally, it’s better than good. The Destiny of Fu Manchu is a page-tuner of the highest caliber; a suspenseful addition to the Fu Manchu canon and another feather in Bill Maynard’s cap. This time around he follows the adventures of a certain Michael Knox, a brash assistant to archaeologist Dr. Spiridon Simos. Things heat up rather quickly when Knox is drawn into a sinister plot involving Koreani, Fu Manchu’s sexy and lethal daughter. Maynard paints Koreani as a beguiling seductress, and her scenes are so compelling (and sexy) that even the more cynical of Sax Rohmer’s devotees will be mesmerized by The Destiny of Fu Manchu. Also on hand is British agent Sir Nayland Smith, Fu Manchu’s longtime enemy. The Destiny of Fu Manchu is modern pulp fiction at its best.
Posted by Thomas McNulty at 5:01 PM No comments: