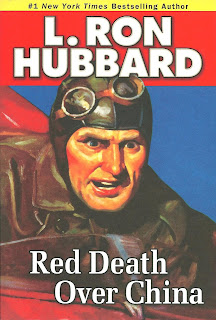 Red Death Over China is not a typical pulp fiction story and that’s why I enjoyed it so much. The second reason I enjoyed this 1937 tale reprinted from the pages of War Birds magazine is due to the fact that all of L. Ron Hubbard’s pulp fiction is immensely exciting. Hubbard demonstrated an acute understanding of genre writing and during his long career he mastered them all – air adventure, westerns, fantasy, science fiction, crime suspense and many more. Red Death Over China falls into the air adventure category, but naturally it’s much more than that. This remarkable tale is a character study of a man that has lost his way. And when he finds a new purpose it comes as a surprise to him, and he realizes the true nature of sacrifice. American pilot John Hampton cares for no one and believes in nothing. He wants a paycheck, and so he signs on with Mao Tse-Tung’s army and brings along his Bristol, an aging slipshod airship. But after a particularly nasty battle where he saves an officer, Hampton is told the story of the Red Pagoda. Now, pondering life and death choices, Hampton’s attitude slowly changes. The final line of the story is a piece of dialogue that will resonate with readers long after they set the book down. Red Death Over China is American pulp fiction at its best. This volume includes two bonus stories: The Crate Killer, a brilliant suspense air adventure classic; and Wings Over Ethiopia. I love Hubbard’s air adventure stories and this book is highly recommended.
Posted by Thomas McNulty at 4:32 PM 2 comments: