Three Against the Stars by Joe Bonadonna is Now Available! 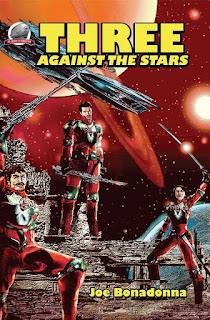 BOLD NEW SPACE OPERA
Airship 27 Productions is thrilled to announce the release of its 15th title of the year, a rousing new space opera; THREE AGAINST THE STARS by Chicago based writer Joe Bonadonna.  Best known for his sword and sorcery fantasies, Bonadonna now steps into a whole new arena to deliver a truly fast paced futurist pulp adventure.

On the distant alien planet of Rhajnara a conspiracy created by the facist Khandra Regime is set into motion to overthrow the rightful Rhajni Republic and instigate a policy of ethnic-cleansing.  The conspirators are cunning and it seems nothing in the universe can derail their mad apocalyptic scheme.

Nothing that is but three rambunctious Space Marines from the Third Regiment Company E of the United States Space Marines assigned to Rhajnara with the Terran Expeditionary Force.  Sergeants Fernado Cortez, Seamus O’Hara and Claudia Akira are the most unlikely trio ever to don jarhead camouflage and become military heroes.  To their superiors they are wild, reckless and incessant troublemakers always in the thick of things.  Yet their courage, loyalty and devotion to duty prove them to be the toughest Devil Dogs in the Corp.

Now, with the aid of a Medical Corpsman named Makki Doon, a young Felisian native proto-feline humanoid, these three futuristic musketeers are about to become the one factor capable of exposing the traitorous Khandra coup.  But to do so they will have to put their lives on the line one more time and risk all to save the day facing off against incredible odds.  To save an empire they will truly become…THREE AGAINST THE STARS.

“This is old school space opera,” cheered Airship 27 Productions’ Managing Editor, Ron Fortier.  “From Buck Rogers to the Space Patrol, the classic elements in this book make for a fun read from start to finish.”  The book features interior illustrations by the popular Pedro Cruz with a dynamic cover by Laura Givens and is designed by Art Director, Rob Davis.  “In the end, Joe Bonadonna delivers an action packed space opera fans of Edmond Hamilton and E.E. “Doc” Smith will not soon forget.”
Order your copy NOW by clicking HERE!
Posted by Thomas McNulty at 5:49 PM 2 comments:

Celebrating the work of the Poet Jack Gilbert 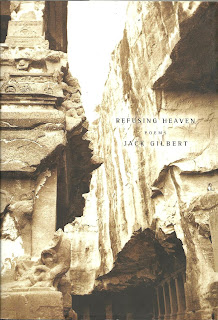 I believe Icarus was not failing as he fell,
but just coming to the end of his triumph.
- Jack Gilbert, from Failing and Flying

When Jack Gilbert died a few weeks ago his name was once again splashed into the public arena. He was famous in death, perhaps more so than he had been in life. All of the obituaries noted his slim oeuvre, his avoidance of public spectacle, and the magnificence of his work. Gilbert won several prestigious literary prizes but never catered to the public. He did the opposite (as every true poet should) and devoted himself to traveling; and by traveling I suspect observing, and certainly by indulging in that which is far more important than literary fame – the very act of living. His poems touched many people and he has long been a hero of the literati. But Gilbert was not generally accessible to the public. Now that he is gone what remains are his poems. That is all that a writer can leave us. Everything else is just memories and photographs, but the poems will always have a life of their own. “We are all burning in time,” Gilbert wrote in a poem titled Burning (Andante Non Troppo), “but each is consumed at his own speed.” In all of his work there shines an acute understanding of people, of passion, death, love and loss.

The heart has
a life of its own. It gets free of us, escapes,
is ambitiously unfaithful. Dies out unaccountably
after eight years, blooms unnecessarily and too late.
Like the arbitrary silence in the white woods,
leaving tracks in the snow he cannot recognize.

- from Not the Happiness but the Consequence of Happiness

Still, Gilbert was no literary outlaw. He was published by Alfred Knopf and his poems sometimes appeared in The New Yorker. He was, like it or not, mainstream chic, at least for the east coast snobs in Manhattan’s dismal Art-Speak community. For the rest of us, the literati, he was just a damn good poet. By his own admission he felt that living was far more fascinating than attending literary banquets, and so Gilbert went about the business of his life. I don’t know if we’ll ever know more about his travels than we need to, but I suppose one day a biography will be published with all types of titillating details. And that will either be illuminating or not depending upon the author. Meanwhile, we have his poems. Speaking for myself that’s just enough. 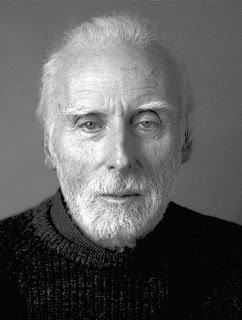 Posted by Thomas McNulty at 6:49 PM No comments:

Tales of the Bagman by B.C. Bell 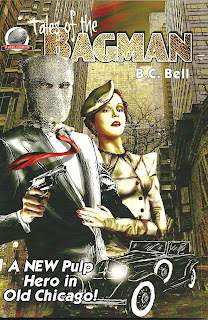 B.C. Bell’s Tales of the Bagman is another great title from Airship 27, one of the pre-eminent publishers of New Pulp Fiction. Bell is a Chicago writer and this book is a real winner. Set in the mid 30s in Chicago, Frank “Mac” McCullough works for Chicago’s mob and breaks legs for a living. But when he has to rough up his uncle he has second thoughts. He takes action of a different type as The Bagman – a vigilante with a bag over his face to conceal his identity. Now he’s working for the underdog; guys like his uncle. Labeled “The Bagman” by the press, McCullough commences with a campaign to rid Chicago of lawlessness, and that’s when this book really kicks into high gear. B.C. (Byron Christopher or “Chris” to his friends) Bell has written an incredibly entertaining novel. The setting, characters and plot all flow seamlessly. Bell is an imaginative, imagistic writer which is the style I’ve always favored. He slips in this deft characterizations and images with the slippery ease of a boxing pro: “Coco blew smoke out of perfect, cupid bow lips.”(p.47). Indeed, Miss Coco Blue is but one of numerous characters that come alive with Bell’s vivid prose. And there are Crankshaft, an auto salesman and suddenly willing ally for The Bagman; Slots Lurie, Wheezy, Sammy the Scar and many others. Also of note is Bell’s knowledge and research about Chicago. The city plays a character, too, albeit as a stage setting, but vital nonetheless. This is Capone’s town and its Capone’s era, or at least the tail end of it. Those familiar with Chicago will recognize places like The Green Mill which during this period catered to an entirely different clientele. Tales of the Bagman is loaded with historical details and locations which made it all the more fun to read. I’m tagging B.C. Bell’s Tales of the Bagman as one of the top New Pulp Fiction titles I read this past year. I suggest you put this title at the top of your Christmas shopping list. B.C. Bell’s Tales of the Bagman is a keeper!
Posted by Thomas McNulty at 9:01 AM No comments:

Here’s an eleven minute video I shot featuring Joe Bonadonna and David C. Smith. This was a lot of fun to do and I hope everyone enjoys it. I might revise it later if I can figure out how to slow the scroll at the end and add music. LOL Many thanks to Joe and David for participating! 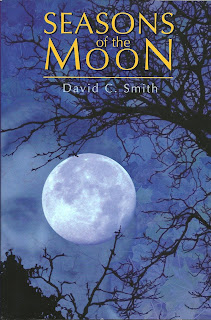 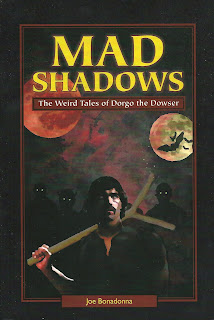 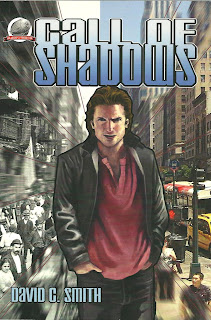 Posted by Thomas McNulty at 8:07 PM No comments: 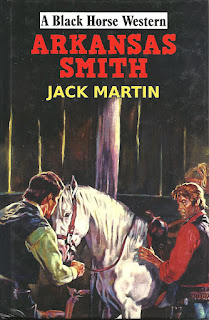 Gary Dobbs (who also writes under the name Vincent Stark) is a one-man creative powerhouse. He began publishing his Black Horse Westerns a few years ago and was responsible for an amazing and successful marketing campaign that brought a great deal of positive attention to Robert Hale’s famed imprint. His first book, The Tarnished Star, should be required reading for western fans. Arkansas Smith appeared in 2010 and is available in paperback as well. Arkansas is a former Texas Ranger and when he finds his old pal Will McCord ambushed and near death he decides to help. Once a lawman always a lawman. He soon finds out this land owner named John Lance might not be neighborly at all. He’s got some bad-asses working for him, Clay and Jim, who stir things up when Arkansas is in the town of Red Rock purchasing supplies. Word spreads that Arkansas Smith is in town, the man they say was “born on a battlefield.” (p. 24) After the fourth chapter there’s a splendid flashback titled “Yesteryear” that explains parts of Arkansas’s past and the origin of his name. This is the first of several short flashbacks that fill in the back story. Meanwhile, Arkansas will have his hands full with John Lance and his men and possibly a smidgen of romance. Arkansas Smith is an excellent western, beautifully written and tightly plotted. There’s plenty of action but the story sort of leans into it and then lets it explode in the final showdown. The measured pacing and fine writing make this a real book lover’s treat.  Arkansas Smith II: The Tumbleweed Trail is available on Kindle. His other books include The Ballad of Delta Rose and Wild Bill Williams. His Vincent Stark novels include The Dead Walked: Book One – Outbreak.

You can learn more about Gary Dobbs, Jack Martin and Vincent Stark by visiting his blog HERE!
Posted by Thomas McNulty at 8:14 AM No comments: 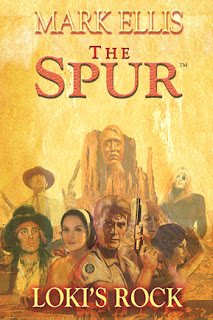 Followers of this blog will recall my review of Cryptozoica by Mark Ellis. That was one of my favorites this past year and a classic adventure in the truest sense. Under the name James Axler he also created and writes The Outlander series, which, incidentally, are loads of paperback fun. Now he has published The Spur: Loki’s Rock, the first in a series. I was hooked from page one. No, let me correct that – I was hooked from the blurb prior to page one! That’s right, this is a rollick’ science fiction adventure in the grand tradition of space opera and westerns. Sometimes writers (and painters and actors and musicians) find themselves in a creative groove where they hit their marks, strike the right chords and chew dialogue like candy. That’s when it all flows creatively. I think Mark Ellis is in the right groove. And I think he’s going to ride that groove for a very long time. The set-up: four hundred years after the Third World War many earth corporations began searching the galaxy for off-world resources. Explorers eventually found evidence of something that became known as Imperator Tyranny which they theorized that these humanoids had a vast influence on cultures including earth’s Sumeria. Meanwhile, one of the planets in the Orion Spur, Loki, became a settlement for colonists, many of whom don’t get along. A commonwealth judge assigns Quentin Crockett to document what has been happening on Loki, and that’s when things heat up. Dr. Quanah Parker, Officer Alexis Jones, weird insect like things called shreekwings that are barely six inches long but with a wingspread of over two feet and a very nasty bite,  an all-terrain cargo hauler named Ambler, a Mnemosyne (a synthetic human), and an amnesiac girl they call Zeda are among the characters, devices and inhabitants of Loki. And there are many, many more. The Spur: Loki’s Rock is an action-packed wild ride! This is a must-have book for readers that enjoy adventure novels, and once again Mark Ellis has written one the year’s best. There are plot twists, fascinating characters, great action scenes and tight pacing. Now I’m waiting for next one! 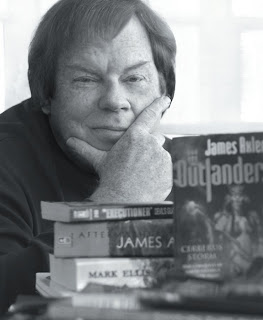 Posted by Thomas McNulty at 4:05 PM No comments: