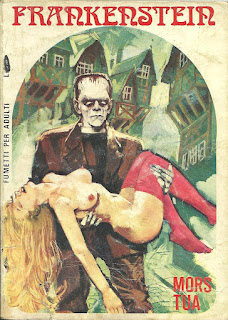 Here it is, perhaps the single influential novel in horror fiction. Originally published in 1817, Frankenstein has endured nearly two centuries. Quite naturally my introduction to the story came courtesy of Boris Karloff’s three films, and by the time I first read the novel in paperback I was well acquainted with the basic plot and images from the movies. At that tender age I found the book challenging, but over the years I have nurtured a fondness for Shelley’s original tale. It is admittedly difficult to separate the name “Frankenstein” from the Jack Pierce classic make-up and Karloff’s brilliant portrayal of the monster. There is so much more involved in the story than just the monster’s horrific appearance. There are many editions of Frankenstein available. Shown here is the Airmont Publishing 1963 paperback edition of Mary Shelley’s Frankenstein. Also shown are several Italian Fumetti (Essentially, comic books. Fumetti is Italian for “little puffs of smoke,” a reference to the speech balloons). Frankenstein had his own Fumetti series although it was short-lived. Perhaps the best known erotic Fumetti series was Zora the Vampire. Zora frolicked with Frankenstein’s monster in several issues, along with other monsters. Sukia was another vampire-themed Fumetti that included Frankenstein’s monster in several storylines. These Fumetti emphasize sex and demonstrate influences from both films and literature. Also recommended is the Fall River Press edition with illustrations by Lynd Ward. The Ward illustrations were originally published in a 1934 edition. They are reproduced in this edition and make an instant collector’s item. The original 1817 edition separated the story into three sections but modern editions have eliminated those separations. I recommend you track down the Norton critical edition if you are interested in the history behind this true classic. Frankenstein by Mary W. Shelley is the # 1 horror novel in literature. 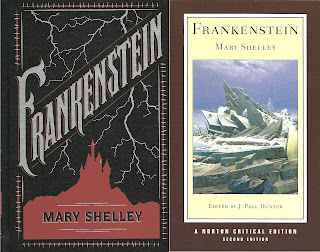 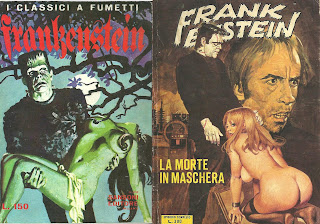 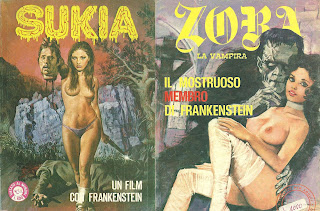 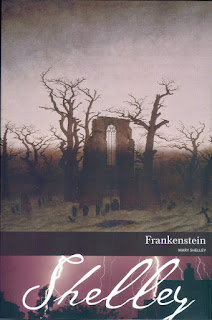 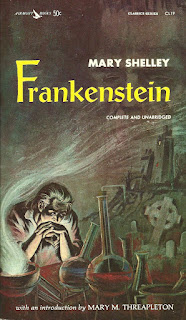 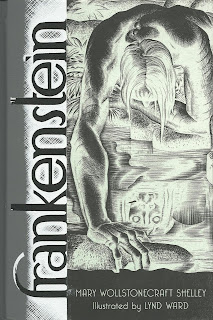 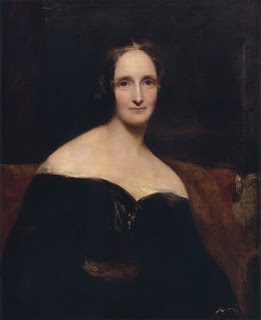 Posted by Thomas McNulty at 6:06 AM No comments: 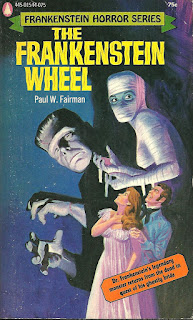 Paul W. Fairman has been gone since 1977 and I wonder how many are left that remember him as Ivar Jorgensen, his primary pseudonym. He also wrote the classic juvenile The Runaway Robot for Lester Del Rey who is credited on the cover. Fairman was a hell of a good writer and I have encountered his stories here and there as a pulp fan. The Frankenstein Wheel appeared in 1972 and was the first in a series. Each subsequent book usually had a different author and the subsequent stories have nothing to do with Frankenstein’s monster. The Frankenstein Wheel was followed by The Night of the Wolf by Frank Belknap Long, The Curse of Quintana Roo by Matt Gardner, Seven Tickets to Hell by Robert Moore Williams, The Hospital Horror by Otto Oscar Binder, The Marrow Eaters by Harris Morris and Dragon’s Teeth by Keith Miles. These are all fun books to read but The Frankenstein Wheel was the best. In fact, I consider it an unheralded classic of paperback pulp fiction. The cover by Gray Morrow is the only cover in the series featuring Frankenstein’s monster and Morrow obviously used a still of Lon Chaney in Ghost of Frankenstein as a model. The Frankenstein Wheel is a direct sequel to Mary Shelley’s Frankenstein. The monster, having survived the ice flow, is back and once again seeking a mate. By learning science after reading Dr. Frankenstein’s notes he hopes to create a perfect mate from the bodies of dead women. The title refers to the Karmic understanding or oneness with the universe experienced by the monster after his emergence from the ice-flow. Don’t forget, this is the swingin’ 70s now. The pacing is much faster than Shelley’s original because Fairman was after all a pulp writer, and that’s why this book is such a blast. I’ve always enjoyed this book and highly recommend it for fans of both pulp fiction and Mary Shelley’s original novel.
Posted by Thomas McNulty at 5:47 AM No comments:

Scary Books - Stories From the Twilight Zone by Rod Serling 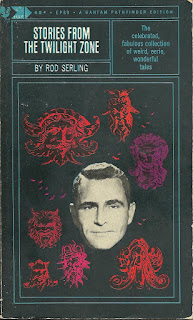 You know all about The Twilight Zone. Maybe you’ve been there a few times. Rod Serling was a genius and his television show thrills me to this day. During its heyday there was pressure to capitalize on the show’s success and Serling released prose versions of some of the show’s more popular episodes. Serling is seldom given credit for his writing talent which was substantial. Here’s the evidence. These are wonderful stories. Essentially, prose versions of episodes of the television series, included are “The Mighty Casey,” “Escape Clause,” “Walking Distance” (which remains one of my favorite episodes), “The Fever,” “Where is Everybody?” and “The Monsters Are Due on Maple Street.” This wonderful paperback was owned by every kid I knew. This, of course, was during the golden age of paperbacks. It was followed by More Stories From the Twilight Zone, New Stories From the Twilight Zone and then two collections with new stories unrelated to the show: Rod Serling’s The Twilight Zone and Rod Serling’s The Twilight Zone Revisited. These last two featured original stories penned by none other than Walter B. Gibson. I love all of these books.
Now the camera pans down from the starry sky where we see Thomas McNulty typing feverishly on a keyboard. Spooky music plays in the background.

Consider if you will Thomas McNulty, cowboy and writer, who like all men sometimes ponders the past. For often he dreams he was visited by dead friends and he wonders what service he can perform to honor those beyond the veil. But the night sky is unwavering in its coldness, the great distances too much to fathom. For Thomas McNulty had ventured further than he could have imagined was possible. He has arrived at that crossroads between sunlight and shadow…in a place known only as….The Twilight Zone!

Now the camera pans down to the road sign that reads:

NEXT STOP: THE TWILIGHT ZONE
FADE TO BLACK 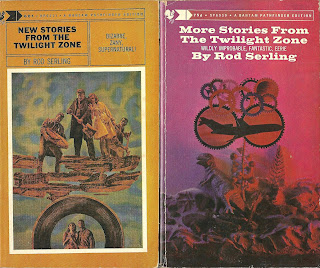 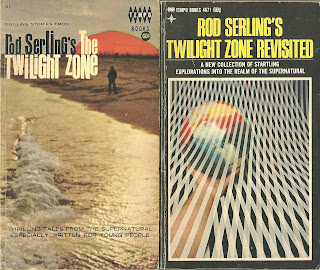 Posted by Thomas McNulty at 6:09 AM No comments: 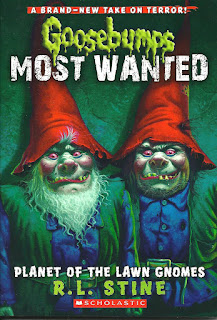 It just wouldn’t be Halloween month without a book by R. L. Stine. My daughter got me hooked on these when she was a kid. I think Stine is great and I’ve always been angered by the fact that some educators have criticized him because of his subject matter. Stine makes reading fun for kids so teachers take note – your students aren’t stupid so stop treating them as if they are. Kids know this stuff is all in fun. Anyway, I haven’t read any of Stine’s Goosebumps books in years so I went out and bought his latest. He still has that magic touch. Planet of the Lawn Gnomes is a typically breezy, suspenseful tale. Troublemaker Jay Gardner, age 12, moves into a new town where he notices a preponderance of lawn gnomes. Jay is full of mischief and keeps getting into trouble – he’s a bit of a prankster – but very soon he learns that there is something really scary about these lawn gnomes – really scary and really nasty! And the twist ending is awesome! Yikes! Stine’s Goosebumps series is marketed to young readers between the ages of 8 and 13 and have remained popular since their first appearance in 1992. I think these books are great. Goosebumps guaranteed! 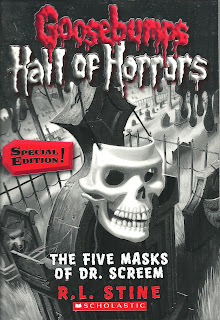 BONUS BOOK! The Five Masks of Dr. Screem by R. L. Stine
To celebrate Halloween here’s the scoop on another Stine book. Monica Anderson and her brother meet a creepy old woman who needs their help. Dr. Screem is after five masks owned by the old woman – masks that hold a special power. When the masks are stolen Monica and her brother Peter need to find them – or else! You’ll get goosebumps from every page!
Posted by Thomas McNulty at 8:53 AM No comments: 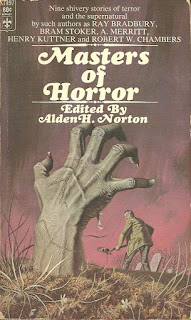 Here’s a paperback delight from the swingin’ year of 1968. The cover is outstanding and I wish I knew who painted it. This was the anthology that introduced me to The Werewolf  by Clemence Housman. There are only nine stories in this slender but vital book. I paid 60 cents and tax for it at Wieboldt’s Department Store. That store always had a great selection of paperbacks. But the stand-out story in this collection was Ray Bradbury’s The Candy Skull, a pulp masterpiece from the January 1948 issue of Dime Mystery. I’ve always loved the story but in a letter to me years ago Bradbury told me: “My recollection of The Candy Skull, if I’m correct, is that it was fairly good. Most of my early Dime Mystery and Detective Stories were done when I was much too young and I hadn’t yet learned completely how to be a short story writer.” Ray was a bit hard on himself because The Candy Skull is much better than “fairly good.” The other stories in this Berkley Medallion paperback are Dracula’s Guest by Bram Stoker, The Transformation by Mary Shelley, The Yellow Sign by Robert W. Chambers, The Woman of the Wood by A. Merritt, Blind Man’s Bluff by H. R. Wakefield, A Piece of Linoleum by David H. Keller, and Before I Wake by Henry Kuttner. Oh boy, it’s mouthwatering to ponder these stories even after all of these years.
Posted by Thomas McNulty at 8:17 AM 2 comments: