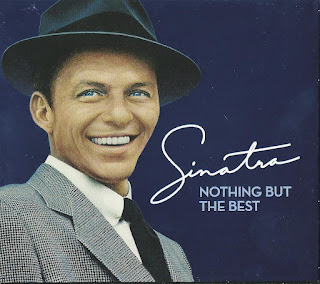 On those late winter days when spring teases us like a harlot in a short skirt I cannot resist the urge to create something. You may have guessed by now that the world I’ve created for myself is exceedingly complex and an absolute joy to me. I even enjoy bad days. I enjoy them because I’m here and I’m not sitting on my ass complaining which is the fashion these days. And as I sit here listening to Sinatra yet again I still can’t adequately express why his music is the equal to the poetry of W. S. Merwin or the sweeping novels of Thomas Wolfe. It’s something I know instinctively.

So after a rough week of work and more work and then fashioning that pulp story set in in 1939 I decided to take just a moment, crack a beer, and listen....

I don’t normally talk about music on this blog but it’s very much a part of my life. I am never without music, and in a way not dissimilar to my reading habits I refuse to limit myself to one style, artist or genre. But Sinatra is eternal. I wanted to write an essay on why Sinatra matters when I discovered that Pete Hamill had beaten me to the punch. His slender book, Why Sinatra Matters, is a fixture in my den. It’s important to remember that I’m a graduate of the Beat Generation cum Rock and Roll generation of spontaneous poets. It’s the moment that matters.

I won’t presume to offer more than Pete Hamill, but in the spirit of the moment I’ll offer this morsel to the digital highway. Perhaps some midnight cyber surfer will read this and decide to explore Sinatra. Stranger things have happened, and the Internet does have its purposes after all. Learn for yourself why we treasure the collaborations with Nelson Riddle and then Billy May. Learn for yourself why Sinatra’s rendition of “The Way You Look Tonight” as arranged by Riddle is the best version of this Jerome Kern-Dorothy Fields song ever recorded.

I had a friend once who said Sinatra didn’t make him want to dance. So I bet him I could play him a Sinatra track that would get him out of his chair and swinging his ass, drunk or sober. So I played “Mack the Knife,” a duet Sinatra recorded with Jimmy Buffett. I played it loud. You can guess the rest.

It’s time to swing. Turn it up loud. 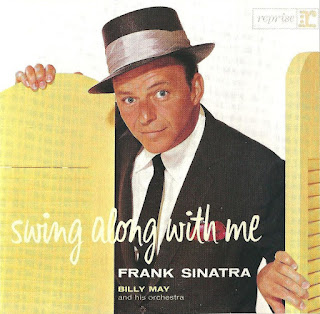 Posted by Thomas McNulty at 11:39 AM No comments:

Review: Riders of the Barren Plains by I. J. Parnham 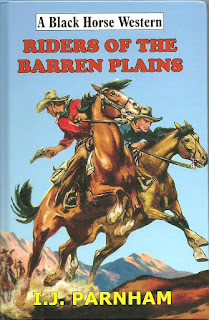 When it comes to J. Parnham should be at the top of everyone’s reading list. He’s not only prolific but he’s a damn good writer. Riders of the Barren Plains is one of his more recent books for Robert Hale’s Black Horse Western series and it’s a fine entertainment. Jeff Steed is looking for employment but he gets into trouble when Blake Kelly’s gang robs the bank. Having been a reluctant watchman for the robbery, Steed finds himself drawn into riding with the posse out to Barren Plains. His dream of finding a steady job is now complicated by his involvement in two separate factions, either of which might get him killed or land him in jail.

Riders of the Barren Plains is a tightly plotted and fast paced book. Steed is a likeable character and Parnham builds sympathy for his plight from the start. The action and suspense are plentiful and interested readers are guaranteed a page-turning western that’s well worth your time. Parnham is well-versed in western lore and legend. His writing is concise, literate and engaging. The action scenes are particularly well done. The entire story comes across as something he clearly put a lot of effort into, and fans of traditional westerns won’t be disappointed. In many ways it’s typical of the Black Horse Western brand, which in my highly biased opinion is a good thing.

If you haven’t read a Black Horse Western then Ian Parnham’s books are a great place to start. Ian has published over twenty-five westerns for Robert hale Publishers and several more for the Avalon Western Series.

You can order Ian’s books direct on his blog by clicking HERE.

See you along the dusty trail!
Posted by Thomas McNulty at 12:41 PM 2 comments: 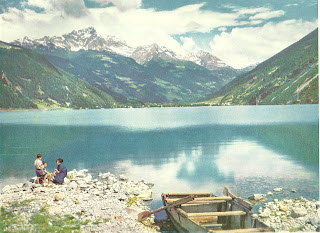 Just for fun (and since I’m between essays and reviews) Here’s the March image from the Adams Rite Manufacturing Company Calendar, March 1955.
Original caption: The Lake of Poschiavo with view of P. Di Verona.
The Adams Rite Manufacturing Company built aircraft locks and controls and were located in Burbank, California. I googled them and they are still in business and use the same logo. This 1955 calendar was composed entirely of Switzerland images and is still quite beautiful to look at. 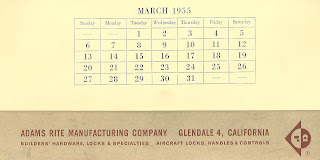 Posted by Thomas McNulty at 5:25 PM No comments:

Reviews: Mouthpiece and Trouble on His Wings 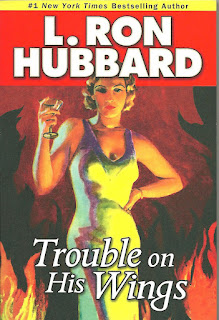 The lastest releases from Galaxy Press are two great pulp classics!
Here are my reviews!

Review: Trouble On His Wings by L. Ron Hubbard

In this exciting pulp classic from 1939, Johnny Brice is working as a flyer and photographer for World News publications. He’s a typical brash young man, intent on making a dollar and willing to take chances. Constantly putting himself at risk is second nature to him. Determined to get the first newsreel footage of disasters as they happen, he goes so far as to parachute into the ocean in order to get picked up by a rescue ship on its way to save the survivors of a burning vessel. Then one day he inadvertently saves the life of a beautiful girl, and as you would expect from a piece of pulp fiction the plot heats up from there.

Trouble On His Wings is one of many air-adventure stories penned by L. Ron Hubbard, himself a barnstorming pilot in his youth. This is one of his longer stories from the 30s and what a wonderful tale it is. Johnny Brice is identical to the male lead characters in Hubbard’s best fiction; immediately likeable, handsome and resourceful. I’m particularly fond of Hubbard’s air-adventure tales because his love of flying and adventure comes across in the writing. His characters speak to the joy of flight and the grand sweep of landscape below them: “She watched the country unroll below them, small ripples of pleasure going through her at the variety of colors of the checkerboard earth, of the dollhouse towns, always with their guardian church spires...” Such strong writing makes reading Trouble On His Wings all the more pleasurable. You can see and feel the action of the story.

And what would a great pulp fiction story be without a little romance? Trouble On His Wings is flavored with a blossoming romance as Brice takes note of his beautiful rescued passenger as they fly across the country: “Her honey-gold hair was delightfully real.” But naturally their fate is undecided as Brice begins to think the girl, who refuses to tell him her name, has jinxed him. His best efforts at getting newsreel footage are crushed time and again with a string of incredible bad luck. The girl may be beautiful, but he can’t shake either her or the trouble that keeps coming his way. Written in eleven thrilling chapters Trouble On His Wings is a robust and heartfelt adventure. The plot takes a few turns and twists that will keep readers guessing as they whip through the pages.

This was such a fun book to read. I was swept along myself on this cross-country thrill ride. Readers will be rooting for Johnny Brice and “Jinx” to not only work out their problems, but survive the inexplicable poor fortune that plagues Johnny at every turn. What you get with every story by L. Ron Hubbard is a dedication to the characters, the plot and a devotion to the readers who are expecting the best, and then receiving the best. Books like Trouble On His Wings can be enjoyed again and again along with the entire 80 volume series. 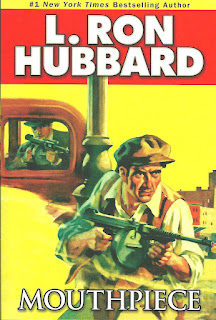 
Galaxy Press continues its juggernaut monthly reprints of L. Ron Hubbard’s classic pulp fiction with Mouthpiece, a 1934 story originally published in Thrilling Detective. This short crime suspense tale brings to mind the gangster films of the 30s starring Humphrey Bogart, James Cagney and George Raft. It was the era of J. Edgar Hoover’s war on crime when the exploits of bank robbers John Dillinger and Pretty Boy Floyd both captivated and frightened a nation. In this splendid story Mat Lawrence returns to the city to investigate his father’s death. From the opening paragraphs we are treated to Hubbard’s excellent prose. The city here is described as “this world of sound and steel.” Such deft, imagistic flourishes always add another level of quality to Hubbard’s pulp fiction. In another passage a revolver held to a man’s head becomes “a round, hard snarl.” This is classic American hard-boiled pulp fiction. Mouthpiece is short, but satisfying. Hubbard’s knack for creating likeable characters and believable, fast-paced plots is readily evident in Mouthpiece.
Mouthpiece also features three other great crime suspense stories from golden age. The second story, Flame City, involves a certain Detective-Sergeant Tom Delaney and his investigation into some mysterious fires. Told in three short chapters, the middle section even features a “man-trapped-in-a-locked room” which so often was a staple plot device for pulp writers. Hubbard’s take on this familiar ploy was to infuse the scene with taut prose and raw action. Brutal without being gory, Hubbard’s characters are street-toughs with a keen intellect and the savvy required to extricate themselves from trouble. And there’s always trouble in one form or another.
In the third story, Calling Squad Cars, police radio operator Jim Collins is framed by gangsters and sets out to clear his name. Collins is a typical Hubbard hero. When Collins is trapped by the gangsters “It suddenly came to him that he was weaponless, save for his two fists and his wits.” My favorite of the selections, Calling Squad Cars pits an average man against impossible odds. Collins uses both his fists and his wits to good effect.
The final entry, The Grease Spot, is about a mechanic named Bill Milan who picks up car crash reports via radio and drives to the crash scene to offer his services as a way of making money. The cops don’t like it so much but it’s not illegal. Then one night Milan arrives before the police and he’s forced to drive some gangsters to safety. The ensuing action is thick with tension as Milan struggles valiantly to turn the tables on a gangster named Carbonelli.
The four stories presented in Mouthpiece are prime examples of the pulp era’s best fiction. Hubbard’s stories are a joy to read. In reading these stories I was reminded why fiction is called “creative writing” when they teach it in colleges and universities. Hubbard’s creative talent shines in every story. It doesn’t just rain in stories like these; instead a character looking out at the street will pause and note “the rain which skittered across the black pavement.” And if a car passes by the “tires sang over the wet asphalt.” A car’s wrecked taillight will shine “like a wet ruby.” Such colorful prose, resourceful characters, action and adventure are all the highlights of L. Ron Hubbard’s pulp fiction. Mouthpiece is another gem readers will want to pick up fast.
Posted by Thomas McNulty at 6:24 PM No comments: