Errol Flynn goes to paperback in one week! 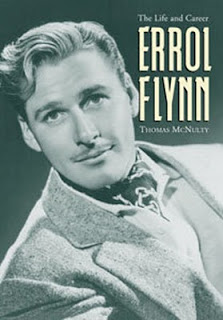 McFarland Publishers has announced my Errol Flynn biography gets re-published in paperback format next week. This supercedes their previous announcement of a spring release. The Book should be available through Amazon and all retail book outlets by October 31st. The retail list price is $40.00 - still high but much better than the hardcover's $65.00 price tag. The hardcover is now officially out of print. I want to thank everyone that supported this book since it was published in 2004. It has been  a steady seller and I thank you.
Errol Flynn set the standard for the modern action hero in films like The Adventures of Robin Hood, Dodge City, and The Sea Hawk. This biography follows Flynn from his birth in Tasmania, Australia, in 1909, to his death in Vancouver, Canada, in 1959. Included is analysis of his films, discussion of the 1943 rape trial that changed his life, a survey of the FBI’s infamous surveillance, and the first detailed account of his television appearances in the 1950s. First-hand interviews with Flynn’s friends and colleagues are complemented by research from FBI files, correspondence, Flynn’s diary, and other sources. Illustrated with rare and previously unpublished photographs, the study also gives attention to the historical backgrounds and cultural influences that contributed to Flynn’s fame; the work takes an objective and analytical look at the actor’s adventurous life.

The study includes two appendices: the first is a collection of quotations from various celebrities, from memories of his talent and style to anecdotes about his wild pool parties. The second appendix is a filmography including all Flynn’s work for film, stage, and television, with cast and crew information.
Posted by Thomas McNulty at 7:01 PM No comments: 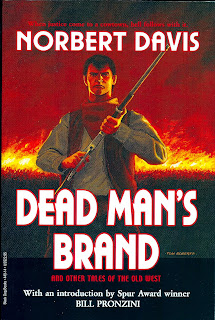 Tom Roberts at Black Dog Books continues to impress me with his high quality paperback reprints form the glorious golden age of pulp fiction. These little known westerns by Norbert Davis were a revelation. This is by far the best collection of western stories published this past year, and they’re over sixty years old! These eight stories were originally published between the years 1935 – 1942 in magazines like Dime Western, Western Aces and Star Western. Norbert Davis is better known to pulp fiction fans as a writer of crime stories which are also highly regarded.

The first selection is my favorite. A Gunsmoke Case for Major Cain features Cain, a tormented but noble survivor of the Civil War, righting wrongs in the west with his sidekick, Stringer. I love the descriptions in this story. This is how introduced Stringer: “He wore a sweat-stained sombrero with the brim turned up in front and fastened that way, cavalry-fashion, and his face was lined and wizened and wryly malicious. He had no lashes at all, and his eyes looked as beady and cruel as a snake’s.” (p.13) Together, Cain and Stringer are formidable – and memorable. A truly riveting and superbly written pulp western.

Other standout stories include Their Guardian From Hell: Roy Falk comes out of his drunken binge and witnesses an event that changes his life. A hardboiled western with outstanding dialogue, pacing and descriptions; and Leetown’s One-Man Army: With a unique plot, unusual but realistic characters, a whisper of humor elevates this action-oater into a memorable tale. Lute is a man that had given up until he meets , a mysterious gunslinger with a calm but whimsical attitude. The remaining stories offer up tight descriptions and fascinating characters: Dead Man’s Brand, The Gunsmoke Banker Rides In, Death Creeps, Sign of the Sidewinder, and Boot Hill Bait.

The book includes an introduction by the great Bill Pronzini and an appendix titled “Hands Across the Rockies: The Lone Film Credit of Norbert Davis” by Ed Hulse. The back cover photograph of Norbert Davis courtesy of Bill Pronzini rounds out a tight little gem that should have you clamoring for more of the same.

Use PayPal and order from Black Dog Books HERE!
Posted by Thomas McNulty at 3:52 PM No comments:

Tales of the Zaca 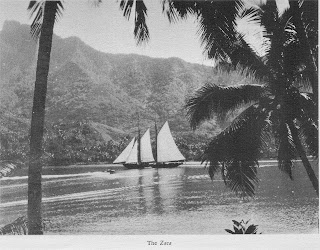 A long time ago I was involved in writing a book about a sailor. That he was a sailor is not in question, but because this man was much more than that he captured the public’s eye and remains something of a legendary figure over one hundred years after his birth and fifty years after his death. When I was writing this book about this sailor I delved deeply into related research and soon became infatuated with the sea. Because as a writer I had everything in front of me – a blueprint of this sailor’s life – but I wasn’t content to construct sentences outlining his chronological adventures. I wanted to put something on the page that captured something of his spirit as a man and as an adventurer. This was, of course, the approach most modern biographers avoid. Such a path is fraught with peril. But what really made him tick? And where is his wandering spirit today?
I found out. It was there in a couple of books this sailor had read himself; two precious volumes that have over time collected dust on my bookshelf. But once in a great while I dust them off and again thumb through their pages, reading passages as my mood dictates. They are two books about a ship and my subject once owned that ship, the Zaca. 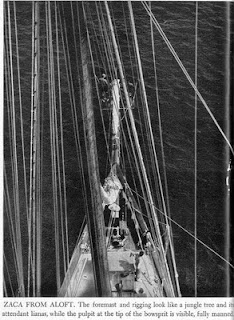 The Cruise of the Zaca by Templeton Crocker was published in 1933. It resembles Charles Darwin’s The Voyage of the Beagle in construction and tone. ’s 1839 book is a combination scientific journal and travel memoir. Templeton’s Crocker’s book offers up some facts about the Zaca – it was designed by Garland Roch, a two-masted gaff-rigged schooner with topsails, built in the Nunes Brothers shipyard in and set sail for the first time on . According to Crocker Zaca was a Samoan word meaning “peace” but that may not be true. More likely Zaca derives from Chumash Indian and one source informed me he believes the ship was built with wood from the Zaca forest in . Perhaps taking a lesson from Jack London (whose travel books are sadly also out of print) Crocker’s The Cruise of the Zaca offers myriad observations and enthusiasm for life. The book was popular and well-received and was the first public acknowledgment of the Zaca. Crocker’s travels aboard the Zaca take him from San Francisco to the Marquesas Islands, Tahiti, Cook Islands, Pago Pago, Fiji Islands, New Hebrides, the Trobriand Islands, Port Moresby in Papua New Guinea, Bali, Java, Singapore, Ceylon, the Suez Canal, Guatemala, Mexico and points in between. It’s a splendid book, unlike anything that might be published today, and very much a product of its author’s era. 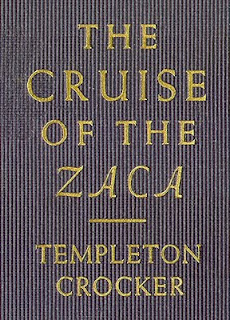 The Zaca’s legend would be secured in 1938 with the publication of Zaca Venture by William Beebe, Director of Tropical Research with the New York Zoological Society. ’s influence on Beebe is prevalent in Zaca Venture but makes a perfect companion to Templeton Crocker’s book. The Cruise of the Zaca and Zaca Venture may be too easily discounted as relics of a bygone age. They are much more than that, as are their authors and the Zaca herself (she sails the seas to this day). These are books about adventure which William Beebe reminds us means literally “That which comes to us or happens by design” and adds that “By adventure I mean the sudden breathless glimpse under the microscope of unexpected beauty and dynamic living in the world of life on a sliver of kelp, quite as much as the harpooning of a forty-two foot whale shark.” Some historians have referred to the 1930s as the last great age of exploration prior to the Space Age, and both Crocker and Beebe embody that adventuresome spirit. I would venture a guess that by 1938 the Zaca was the best known schooner in the world, but that fame would be short-lived and the Zaca’s travels across the seven seas would be truncated by World War II. 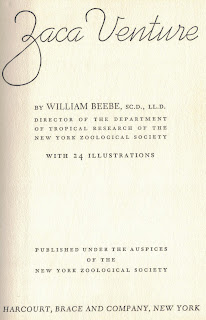 It would take a Tasmanian sailor to put the Zaca in the public eye again. And the name of that sailor I wrote a book about? I’m sure you’ve heard of him. His name was Errol Flynn. His travels aboard the Zaca are now legendary.
But that’s another story...
NOTES ON THE PHOTOGRAPHS
TOP: Frontpiece photograph of the Zaca from Templeton Crocker’s classic The Cruise of the Zaca, 1933
2nd Photo: Frontpiece photograph of the Zaca from William Beebe’s Zaca Venture, 1938
Posted by Thomas McNulty at 7:03 PM No comments:

Digital Interlude: The Nature of Light in a Forest 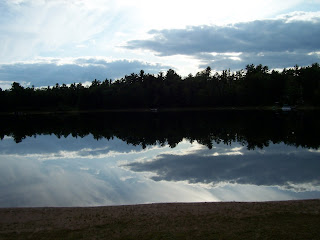 I have always been fascinated by the way light changes in a forest. Up in Wisconsin’s northwoods the forest can get so dark that it’s impossible to see your hand in front of your face. Light is a transverse, electromagnetic wave. Visible light is electromagnetic radiation. Because light is transitory the scenes change constantly. 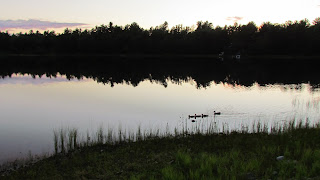 At twilight the woods darken and the surface of the lake is a clean and
smooth as a sheet of glass. 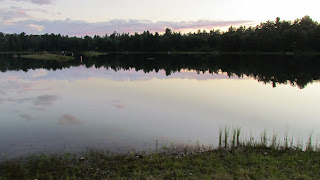 If a storm blows in from the southwest I usually see a change in cloud formations.
The colors deepen and the air is still, expectant. 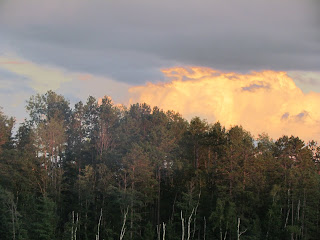 The sky offers up a changing pattern of color and texture. 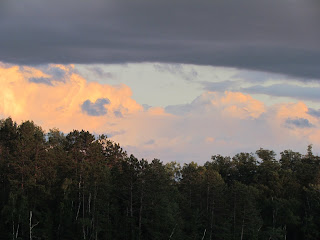 There is a tranquility to the northwoods at twilight that can only be experienced here,
far from town and deep in the woods and on the shore of a hidden lake. 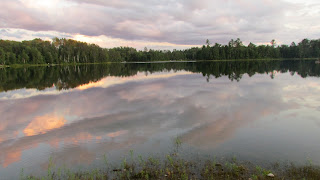 Light reminds us of life’s fragility. 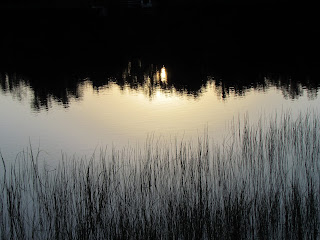 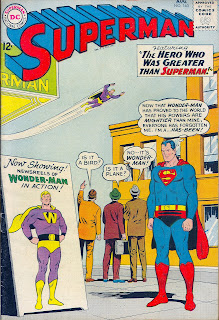 Out here in McHenry County, Illinois the air is buzzing with news of the new Superman movie they’re filming in the nearby town of Plano (substituting as Smallville.) Hollywood seems to rediscover Superman every decade. Comic Book characters are hot in Hollywood right now, which is all well and good. This American cultural icon was created by Jerry Siegel and Joe Shuster. Superman made his debut in Action Comics # 1 in 1938. The rest is history. Here are some classic covers from my collection for your visual delight. I got a kick out of the Beatles references on the cover of the two Jimmy Olsens. Enjoy! 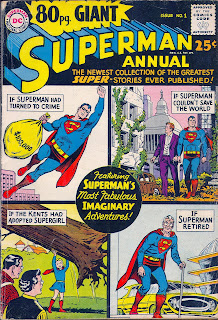 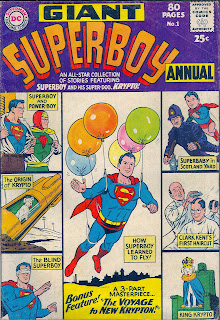 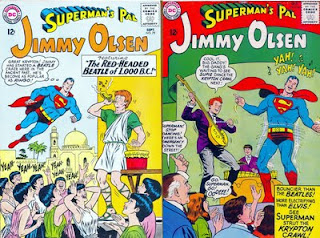 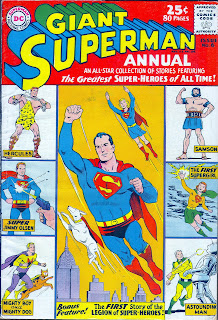 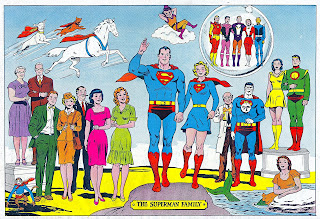 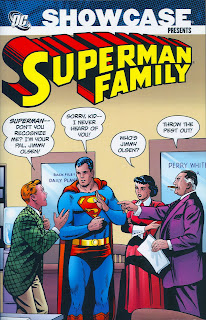 Posted by Thomas McNulty at 8:29 PM No comments: