Why I Read the Pulps: Two Classics 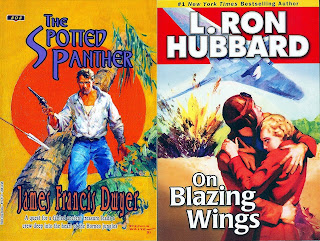 Imagine a world without the Internet. Missing is the computer’s constant electric hum, spam e-mail, pontificating know-it-all bloggers, and all of that home-grown cynicism that drips from the sentences of so many hate-filled commentators. Imagine a world where writers had to earn their living by entertaining readers rather than insulting them.
The pulp era was like that, and during its heyday from about 1910 to 1950 writers of varying degrees of talent set out to make a name for themselves writing genre fiction. Genre is defined as a literary composition characterized by form, style and category. And so was born the air adventure story, westerns, fantasy, science fiction, sea tales, mystery and romance stories. And what a grand era for readers and writers alike. I regularly read pulp stories and with several companies specializing in reprints this is a good time to introduce yourself to some fantastic writers from the glorious Golden Age.
I read The Spotted Panther by James Francis Dwyer last year. I took notes. Originally published in The Cavalier magazine in 1913 The Spotted Panther is a masculine adventure about three men journeying into the heart of Borneo in search of the great parong of Buddha. It is anything but a traditional jungle adventure. The pacing is breathless, as one would expect, but what I found fascinating were the historical, geographical and mythical references scattered throughout the tale. These references are sprinkled into the dialogue and narrative alike. I was intrigued, and initially I thought Dwyer had an active imagination, but eventually it dawned on me that these allusions were factual. Consult a good encyclopedia and you’ll discover that places like “The whirlpool of San Larn (p.34),” “The fruit groves along the Tagus (p.40),” and the “slopes of Hymettus (p.71)” are actual locations. Dywer knows both his geography and history, too. Ajax, Jason, the bones of Tamerlane, the robe of Siva, Methuselah, Hercules and even Stonewall Jackson are all mentioned. The story itself is a walloping good yarn, told in the first person, and heavy on action. The Spotted Panther is a superb entry in Black Dog Book’s catalog and among my favorites from last year.
The incomparable L. Ron Hubbard’s pulp fiction is being reprinted by Galaxy Press with a new release each month through 2014. Hubbard’s talent is evident on every page of On Blazing Wings, an air adventure story originally published in the May, 1940 issue of Five-Novels Monthly. On Blazing Wings struck a chord with me, perhaps because it’s a combination of fantasy and air adventure. Airman David Duane’s story is not one you’ll likely forget. On Blazing Wings is far more somber than any of the other air adventure stories Hubbard wrote, and its fair to say it’s a love story thinly disguised as an adventure tale. But the romantic element isn’t pronounced because LRH is more concerned with how David Duane arrives at a fateful decision in his life. The conclusion, which I won’t reveal, is evident from the preface, but the tale is so well told that it was impossible for me to put the book down even though I had a fair idea what would happen. Of course, the ending still has some surprises and throughout the story you’ll be treated to some hardboiled descriptions: “The long rows of tanks looked like otherworld beetles, and the shadowy planes, in their white covers, were like hooded vultures (p. 51).” On Blazing Wings exemplifies LRH’s mastery of genre writing and discovering books like this is why I read the pulps.
You can visit Galaxy Press HERE
You can visit Black Dog Books HERE
Posted by Thomas McNulty at 7:55 PM