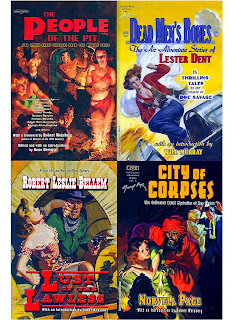 Black Dog Books is based in Normal, Illinois and enjoys popularity as one of the pre-eminent publishers of classic pulp fiction. All of the titles from Black Dog Books would make a great Christmas gift so I am running this interview with the hope readers will visit the Black Dog Books website and order up some adventure stories!

Q:  WHY ARE THE PULPS SO POPULAR TODAY?

A: The explosion of small press operations has allowed many pulp-based works to be brought back into print that were unavailable for decades, both through the rarity of the pulps, and through the price tags the actual magazines now carry. As well, since there is practically no prose market today for new works of this type, some of these small press operations are producing new works by new creators in the tradition of the 1930s pulp hero stories. This gets people excited that always wanted to try their hand at writing a Doc Savage-style or Shadow-type story featuring a costumed hero. I also think people just enjoy the variety found in pulp oriented material. (Maybe it’s a rebellion against the flood of often-mindless reality TV programming. We can only hope!)
Q: TELL ME ABOUT THE REPRINTS YOU PUBLISH AND WHICH ARE THE MOST POPULAR IN SALES.

Black Dog Books is one of the few publishing houses that produce books of adventure fiction. I have released mystery, horror and science fiction titles too, but the adventure genre is where my own personal true interest lies. For my titles I have always tried to assemble quality fiction from sources not easily obtained by the average consumer, and I think this has become our growing reputation. Factoring in that all contributors (for forewords and introductions) are professional writers, and experts in their field, just adds to raising the quality level and material presented in out titles. Our best-selling recent title has been The Golden Goshawk, by H. Bedford-Jones. This short collection assembles the adventure of Captain Dan Marguard and his escapades in the South China Sea region. These stories originally appeared in pulp magazines that are nearly impossible to lay your hands (Danger Trail and Far East Adventure Stories). It took me several years to acquire photocopies of the stories for this collection. The book received a couple online reviews, has been well liked by readers, and is doing well. I have recently started two new series: “The Best of Adventure” and “The Adventure Library.” As the title implies, “The Best of Adventure” is a series of anthologies selecting the best stories from Adventure magazine, each volume covered a two-year period. Volume one covers 1910-1912, volume two will cover 1913-1915 and so on. We will be putting out at least six volumes in the set. As with any work of this type, the selections are subjective to taste, but hopefully everyone will find something in each volume they like. Adventure ran a variety of subject matter: Westerns, sea stories, military stories, mysteries, South Sea stories, etc. The magazine between 1910-1912 may have printed ten great sea stories, but to include them all would sacrifice other worthy candidates, so we are trying to not make any volume subject-heavy. Volume one will soon be out and reprints works by recognized authors such as Talbot Mundy, Damon Runyon, Frank L. Packard, Rafael Sabatini, William Hope Hodgson, James Francis Dwyer among others. Many of these works have been unavailable for decades or never reprinted at all. Online banter has been good in anticipation of this series. Issues of Adventure from pre-1920 are difficult to obtain so many readers have never had the opportunity to enjoy this fiction. Titles in “The Adventure Library” will reprint single character series or single author collections culled from the pages of Adventure (and other titles), primarily of uncollected works or forgotten and overlooked series. Volume one of this series, entitled The Black Death, assembled the adventures of Sir John Hawkwood and his White Company in Italy in 1380, written by Marion Polk Angellotti. Volume two collects for the first time in book form In the Grip of the Minotaur by Farnham Bishop and Arthur Gilchrist Brodeur, an exciting tale of Vikings in ancient Crete and Minos. Bishop and Brodeur, college roommates at Harvard, wrote a number of early novels of Vikings and other types of historical adventure that again, were never collected into book form. In the Grip of the Minotaur is the first of several titles by Bishop and Brodeur that Black Dog Books will be issuing in the next year or two.

Q: LESTER DENT IS ONE OF MY FAVORITES AND I BOUGHT TWO OF YOUR REPRINTS. WHAT QUALITIES DID DENT HAVE THAT MAKE HIM SO POPULAR WITH READERS TODAY?

Dent was an exceptional writer of action stories, and action scenes in general. He had a way of weaving pseudo-technology into the works so that it came across as plausible. That is what made his Doc Savage novels so successful. His stories are told in a straightforward manner, and move along at a rapid pace. They never lack for excitement. But yet, at the same time, they do not rely on melodrama. They’re just well-told two-fisted adventure stories. That type of story always seems to have an audience. It may be smaller than it once was, but the genre is still attracting readers. I have three titles currently available in “The Lester Dent Library.” The first, Dead Men’s Bones is a collection of early aviation adventure works; volume 2, The Skull Squadron, assembles all of Dent’s aviation air war, and the third book, Hell’s Hoofprints brings together a series of Western stories Dent wrote for Western Trails. Each book has a new, historical introduction by Dent authority Will Murray, as well as notes, story synopsis and sales information taken from Dent’s working notebooks. As in the pattern with my books, much of this Dent material is from hard to come by magazine sources, being rarely reprinted. There will be at least two more volumes in “The Lester Dent Library.” Lester Dent has never been on the household name level the way some pulp-based authors, lets say Edgar Rice Burroughs, have been, but nonetheless these books have done reasonably well in sales.

NOTE: Thank you Tom Roberts for taking the time to share your thoughts on the pulp industry! 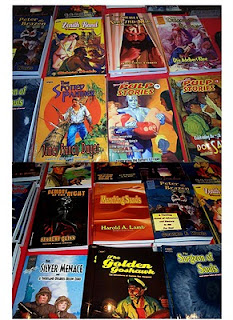 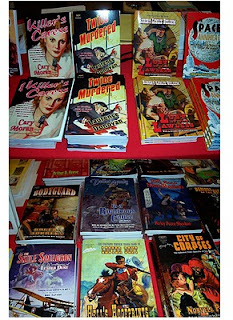