Review: Robin Hood: King of Sherwood by I. A. Watson

I purchased Robin Hood: King of Sherwood at the Windy City Pulp and Paper convention this year. It’s published by Cornerstone Book Publishers in conjunction with Ron Fortier’s Airship 27 Productions. The beautiful cover is by Mike Manley with interior illustrations by Rob Davis. In his superb afterword, Watson provides an historical overview of the Robin Hood legend and explains his affection for the pulp magazines of a bygone age: “In writing “King of Sherwood” I was consciously trying to tell the story as if it had been commissioned for such a publication. This is Robin Hood as if he had appeared in Argosy or the Strand Magazine.” Indeed, this is adventure writing at its finest, i.e., literate, suspenseful, action-packed and genuine.
I have mentioned this book in several Internet forums and hope this post rekindles interest in the book. It’s one of my favorites from the past twelve months. The Robin Hood legend has intrigued me since I saw Errol Flynn face off against Basil Rathbone in the Warner Brothers 1938 classic film.
Robin Hood: King of Sherwood by I. A. Watson can be ordered on Amazon.com. 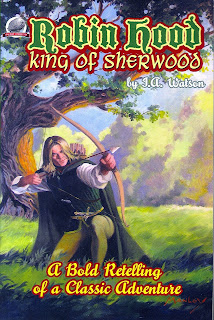 Posted by Thomas McNulty at 7:20 PM No comments: 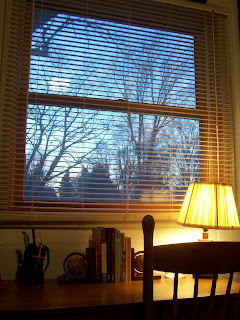 I live on a prairie that borders the Fox River Valley. This tract of rolling grassland is home to farmers and myriad wildlife. The Illinois prairie west of Chicago loses the suburban sprawl that boomed after World War II. The prairie is not flat but nearly flat. There are gullies and trenches and swales that can swallow you alive if you’re not careful. Because we border the Fox River Valley we are co-habitants with the river people. I was a river person once many years ago when I lived in an apartment within walking distance of the Fox River. Illinois is home to over sixty-five rivers which includes tributaries and creeks. Their names are like songs sung at twilight around a smoky fire.

And on and on. This is the land that witnessed the births of James Butler Hickok and Wyatt Earp. Illinois history is written in blood. But today I am thinking about the Fox River Valley and not the echo of gunfire from our past. The Fox River cuts its way across the land like a diseased green snake. The Fox River has long been polluted and when I was a child I recall being told not to eat the catfish because “they glow in the dark.” Decades of chemical pollutants nearly destroyed the Fox River by the Mid- 1960s. Federal regulations in conjunction with the counter-culture conservation movement finally had a positive effect and today the Fox River is somewhat cleaner, but I still won’t eat the catfish.

For a great many people getting out of the Fox River Valley is a daily chore. From my home on Crystal Lake’s west end I am forced to descend into the Fox River Valley to get to work on time. In this area the majority of the population works in Chicago or the suburban Chicagoland sprawl. This requires descending into the valley and crossing the Fox River. This task is made difficult by a lack of planning on the part of our less than esteemed civic leaders. Every bridge that crosses the Fox River is infected with bumper-to-bumper traffic every morning at 7:00 a.m. This cluster of automobiles lasts until nearly 9:00 a.m. It’s necessary for me to cross the river to enter Kane County and then Cook County.

Once I cross the Fox River I enter the former marshland and scrubland that once was home to the Potowatamie Indians. Today this area comprises the cities and towns of Cary, Fox River Grove, Barrington, Palatine, Hoffman Estates and Arlington Heights. Ranch Houses with aluminum siding or old brownstones from the 1950s are the predominant dwelling.

My drive down route 14 for all of these many years has been enlightening. I’ve lost track of the automobile accidents I’ve witnessed. I’ve seen coyotes, deer, possum, raccoons and skunks suddenly bolt in front of my car in a desperate attempt to cross the highway.

I can’t help but to recall Carl Sandburg, a great American poet who is sadly forgotten today: “I was born on the prairie and the milk of its wheat, the red of its clover, the eyes of its women, gave me a song and a slogan.”

On weekends from my den window I look out onto a quiet sunlit summer street and watch the sky change. I am five minutes from the cornfields. My backyard is home to salamanders, snakes, squirrels, rabbits, birds and the occasional possum. The raccoons are nomadic, drifting from tree to attic to garage to tree. Nature is astonishing, cruel, uncaring and beautiful. On a July Saturday the world appears to cease its rotation and for a brief moment I can hold my breath and look past the suburban sprawl and see the land as it once was. The topography hasn’t changed all that much except that Man has built dwellings and created roadways that exist on the land like scars from a scalpel.

The strip malls, restaurants, gas stations, car dealerships, and factories are an aberration, a blight upon the land. During these harsh economic times the prevalence of CASH FOR GOLD signs is a disturbing indicator of a country’s desperation. The soup kitchens of the 30s have been replaced with CASH FOR GOLD franchise outlets. The problems haven’t changed, only the manner in which we handle them has changed. There are many empty storefronts in the Fox River Valley. The Economic Depression that government officials keep telling us is getting better isn’t getting better. Bank robberies and home invasions have increased nation-wide and the Fox River Valley is no exception.

But no matter these problems the land endures as well. These streets are tree-shaded classic American places of manicured lawns and the sound of kids playing baseball. Sometimes on weekends the loudest sound I hear is that of a lawn-mower. Here in Crystal Lake people still sit on their porches and drink lemonade at noon and talk about the latest Cubs losing streak. The Cottonwood puffs catch the wind in May and clog air-conditioners. And for the rest of the summer the crickets, cicadas and bullfrogs create a harmony of sound at sunset that is truly astonishing.

From here, looking out my den window, I’ll write an occasional blog. Pull up a chair. It’s late summer and we can sit here and talk about things…
Posted by Thomas McNulty at 5:58 PM