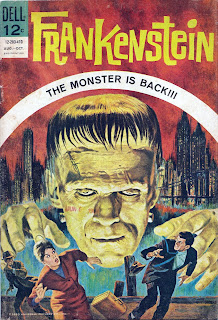 The Dell Comics monster issues from the early 1960s are overdue for a reprinting. They are highly sought after and increasingly hard to find. My copy of Frankenstein is a second printing dated August-October 1964. It’s the only one I own. The others are Dracula, The Wolf-Man, The Mummy, The Creature, and there was a double issue with Dracula and the Mummy. The beautiful painted covers and colorful interior pallet are pure kitsch, and loads of fun.  These comics were inspired by and approved for publication by Universal Pictures who are credited with the copyright on the indicia column. The story is a hackneyed rewrite of the Universal scripts, deviating sharply from the first film but retaining the shlock feel of the horror comics of the early 1950s. That makes it all the better. It’s creepy and fun and honors its source material, the films, and the monster intentionally resembles Boris Karloff. The artwork is moody although simplistic, and the coloring adds another layer of gaudy pulp thrills to the issue. After escaping from Dr. Frankenstein’s laboratory, he’s recaptured and drugged by the doctor who takes him aboard ship across the Atlantic. Once aboard the steamship, the doctor induces the monster to kill the ship’s captain. Once again on shore in America, they lay up at Hobbs Farm where the creepy scene ensues with the monster killing two horses. Meanwhile, the doctor is attempting to get recognition for his creation, unsuccessfully of course, and the monster is thought to have been killed when another ship he’s on goes up in flames and sinks. Dr. Frankenstein states in the last panel: “But I have created a super-human! And someday very soon, we shall return to this spot to discover how successful I have been.” Issue # 2 appeared a few years later, but transformed the monster into a super-hero in red tights. Issues # 2, 3 and 4 are lacking in the creepy atmosphere that makes this first issue so good. I don’t know any collectors that are enthusiastic about the subsequent issues, but this first one is great. 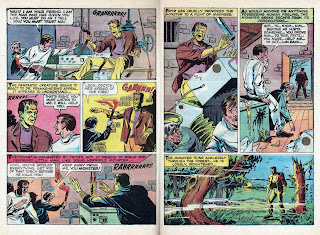