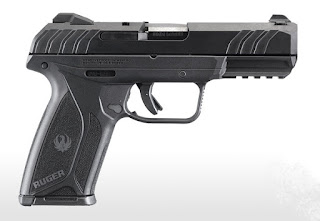 At some point the Sturm, Ruger & Company, commonly referred to simply as Ruger, and founded in 1949 by Alexander McCormick Sturm and William B. Ruger in Connecticut, has become the preeminent American firearm manufacturer. I will argue there are two qualifying factors in my statement; specifically, the high quality of their firearms and their affordability.

My statement is not without precedent. Several on-line resources confirm that from 1986 through 2010, Ruger led firearm production with a record 15 million firearms. From 2008 to 2011 Ruger was ranked the number # 1 U. S. manufacturer of firearms. From 2009 to 2012 they have been acknowledged as the top seller of handguns. My Ruger guns are an active and vital part of my collection.

I waited a full year and a half after the Security-9 Pistol’s release before buying it. I routinely track firearm reviews, especially with YouTube personalities such as “Hickok45” and others. The consensus on the Ruger Security-9 Pistol has been uniformly positive.  I was also on the hunt for a concealed carry alternative, and I’m pleased to report the Security-9 is a perfect match.

The Ruger Security-9 is similar in size and functionality to the popular Glock 19. I’m not a Glock fan, so I don’t feel like I’m missing anything. I’ll take a Ruger over a Glock any day. The Security-9 also compares to the Smith & Wesson M&P (Military and Police) M2.0, which is a great 9 mm pistol, and one I also recommend. It’s my understanding the M.20 is growing in popularity with police agencies, which, of course, was the intention. With the Ruger Security-9 joining a growing list of 9 mm polymer handguns, the market is actually over-saturated with choices. Frankly, I’d rather have multiple choices, and the competition helps nurture a profitable field. 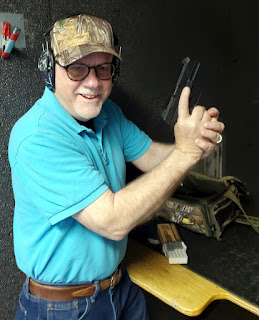 The gun handled great. The trigger was really smooth and the gun size was perfect. I put two hundred rounds through it and the brass ejected cleanly and I hit my target as intended. Traditional brass ammo worked fine, but the steel-jacketed 9 mm had a tendency to jam. That’s not uncommon with steel-jacketed, cheap ammo, so it’s not the gun.

Also, please note, the “Hold/Slide Stop” requires an extra tug for unhindered action. The instruction manual (read it!) makes it clear this feature is intentional and you need to press downward so it is released by pulling the slide slightly rearward. I had to adjust to the “down and back” action. The Ruger Security-9 is an excellent gun and highly recommended. 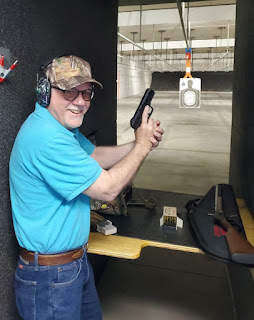 Posted by Thomas McNulty at 2:56 PM