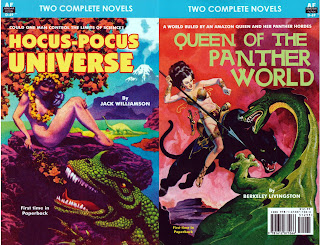 My latest indulgence is another double novel from Armchair Fiction reprinting two classic science fiction stories. Longtime fans of classic pulp know that many of the stories offer mild entertainment, which is fine, but occasionally we get treated to material that is a tad above average. That’s the case here. Both Jack Williamson and Berkeley Livingston were veterans of the pulp magazine market, and each often produced stories that clearly demonstrated their mastery of the genre.  Hocus Pocus Universe is a short, lighthearted story about a misfit named Eon who refuses to accept the world as it, much to the chagrin of his friend, Charley, a science teacher. Jack Williamson is always reliable, although this is a minor work.  Queen of the Panther World is the real treat here. Berkeley Livingston wrote under his own name, but sometimes under a pseudonym. He is less well known as Jack Williamson but published many pulp stories. I’ve enjoyed what I read. In Queen of the Panther World Berkeley Livingston plays himself, a pulp writer working on a story for Fantastic Adventures when his friend, Hank, takes him to Chicago’s Brookfield Zoo to look at the panthers. They are recruited to assist Luria in correcting the problems the male species had caused on her planet. Many of the Armchair Fiction titles were originally published in either Amazing Stories, Startling Tales or Fantastic Adventures, where this story first appeared. Queen of the Panther World is Old School science fiction, written to entertain. It’s a Space Opera all the way.
Posted by Thomas McNulty at 1:16 PM