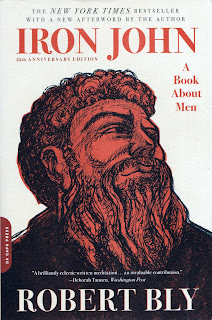 The first book by Robert Bly that I encountered was his poetry, Silence in the Snowy Fields (1962), and I soon learned his poetry was the tip of the iceberg. Bly’s translation of Knut Hamsun’s Hunger is the preferred English language text, and his many books are recommended to you all. Iron John tackles the subject of what it is like to be a man – a real man. He outlines his thoughts on this subject into eight sections that illuminate masculinity with discussions on literature, mythology, modernism, and history. He states at the onset, that “We have to accept the possibility that the true radiant energy in the male does not hide in, reside in, or wait for us in the feminine realm, nor in the macho/John Wayne realm, but in the magnetic field of the deep masculine.” He supports his argument with folklore and literary tales, pulling examples from a wide variety of sources. Bly’s assertion that modern men are “half adults” is grounded in his belief that the decline of traditional fathering, and by extension the fractured family that has become all too commonplace, has resulted in a growing immaturity among men. Absent fathers will result in half-formed males unskilled in teaching, mentoring or commiserating with their male children. That’s the heart of the matter, and frankly, this post only alludes to the complex thinking, scholarly insight and in-depth discussion found in Iron John. I recommend the book as a reasonable counterpoint for discussions to any feminist diatribes, Me-Too fashionistas, or hateful or politically correct trolls, which is not what Bly intended. But that’s my reaction to the book. I don’t think of Robert Bly as a visionary writer, although he’s been called visionary by others. I think of him as a practical, intelligent man capable of reasonable discourse, with interesting things to say, with a body of work that resonates long after you read it. I still find him relevant, and in a world populated by racism, religious intolerance, political zealotry, and men who feel entitled to express their prejudice, hatred and insecurities across the Internet, it’s sadly obvious that Robert Bly was right all along. With The Grimm’s Fairy Tale story about “Iron John” as the starting point for a discussion on how a masculine man can mentor and teach, with an eye on saving souls, Robert Bly has created a landmark thesis that resonates with a power and grandeur that readers won’t be able to – and shouldn’t - ignore.
Posted by Thomas McNulty at 7:36 AM