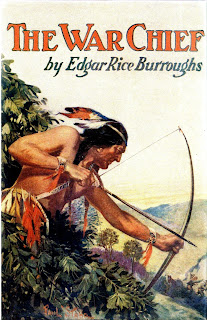 Edgar Rice Burroughs only wrote a few historical novels, and The War Chief is my personal favorite.  This is the tale of Shoz-Dijiji, a white boy raised by the Apaches. Andy McDuff, the infant of Jerry and Annie McDuff, Scotch immigrants, is spared when his parents are slaughtered by the Apaches. A favorite of Cochise, Shoz-Dijiji learns the ways of the Apache, although some Apaches know that he is white and despise him for it. Shoz-Dijiji believes himself to be a full-blooded Apache, which sets up part of the plot. He soon distinguishes himself on the battlefield, as great a warrior as Geronimo. Romance appears in the form of Wichita Billings (a great name for a female character), and while Shoz-Dijiji is feared by white people, he also demonstrates he has a heart. His triumphs and tribulations are rendered by Burroughs in typical form, and the story becomes an epic adventure. Burroughs was no stranger to writing epics. His Tarzan novels are among the greatest adventure stories, and so, too, are his John Carter of Mars novels. The War Chief follows the successful tradition of Zane Grey’s Western romances, but with the Burroughs touch. I enjoyed it, and I pretty much enjoy everything Burroughs wrote. I prefer his Tarzan and John Carter novels over his other work, but The War Chief is quite good. His vivid imagination brings to life the waning days of the Apaches and their dominance over the West.  Burroughs is one of the great storytellers from the last century and his books remain in print for a reason – they’re great. Published in 1917, The War Chief is easy to find for Kindle or print copies.
Posted by Thomas McNulty at 7:37 AM