No Traveller Returns by Louis L’Amour and Beau L’Amour 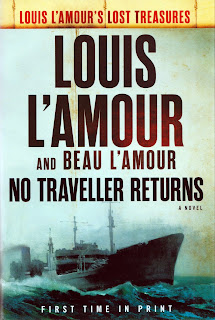 By now I believe that Louis L’Amour’s many fans are aware that No Traveller Returns was his first novel that was rediscovered and partially rewritten by his son Beau, thus making this a posthumous collaboration between father and son. Inspired by L’Amour’s experiences as a merchant seaman before he became a writer of Westerns, No Traveller Returns is a character study of the men aboard the doomed freighter Lichenfield. The book is excellent; well-written, thoughtful and compelling. The key to understanding this book can be found on page 50. No Traveller Returns is not a traditional adventure novel, but rather a literary exercise in storytelling. The lives of the Lichenfield crew are vividly rendered, and so too is a lifestyle and era that has long past. Originally drafted in the late 1930s, L’Amour had captured the wandering seaman’s life, with all of his hopes, dreams and sorrows detailed as a counterpoint to their lives at sea. Each short chapter tells a part of a character’s life, linking them together by the fate of the Lichenfield. L’Amour’s familiar robust prose is present, and the collaboration is seamless. Beau L’Amour deserves accolades here for his dedication to his father’s legacy, and also for demonstrating his own love and talent for storytelling. In fact, I am one who would enjoy seeing Beau write a novel of his own, in any genre, because his talent is obvious. To their credit, Bantam Books has produced a fine first edition hardcover that includes a diagram of the Lichenfield, an explanation of the ship’s personnel, a glossary, and a preface and afterword by Beau L’Amour with a few historical photos that help put the tale in context. No Traveller Returns is a great addition to your home library. Recommended.
Posted by Thomas McNulty at 2:40 PM