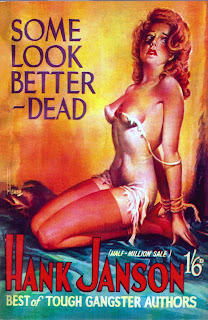 As always, three cheers for cover artist Reginald Heade whose mastery of the female form graced the cover of many paperbacks. First published in 1950, author Hank Janson was really Stephen Frances and the Hank Janson pseudonym is legendary in the UK. Like Sexton Blake, that UK detective and James Bond style adventurer, the Hank Janson stories are not as well known here in the States. I think they’re fantastic, and I have bought many of the reprint editions by Telos which reproduce the lovely Reginald Heade covers. Some Look Better Dead is one of the better Hank Janson tales, saucy but grim. Hank Janson is also the main character, a reporter for the Chicago Chronicle, and when attending a fashion show he gets tangled up in a web of sexual obsession, deceit and embezzlement. With an introduction by Steve Holland, the Telos reprint series of the Janson novels is a great alternative for readers who like hardboiled fiction in the style of Mickey Spillane. Holland is also the author of a non-fiction account The Trials of Hank Janson which covers the obscenity trial of author Stephen Frances in 1954. The Trials of Hank Janson makes for riveting reading. The Hank Janson novels are short, and I think Some Look Better Dead barely hits 40k words. That’s okay, it’s a brisk ride. The stark sexuality (without being too explicit), hard-boiled patter, and tough guy attitude lend a nice tone to Some Look Better Dead. Spice up your Holiday with one of the Telos Hank Janson reprints.
Posted by Thomas McNulty at 8:48 AM