Alone In A Boat 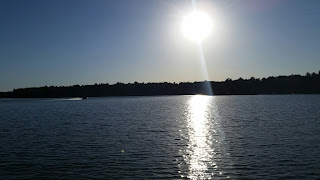 ALONE IN A BOAT
Thomas McNulty

You bring everything with you. Nothing gets left behind.
The physical presence of what you bring with you is a tacit reminder of everything riding on your shoulders or crouched low in your belly like a slumbering demon. A thermos of coffee laced with whiskey, a rod and reel and lure kit, or maybe even a cell phone. The fishing pole and choice of lures is pre-eminent in your thinking as you push the aluminum boat across the lake, the Minn Kota trolling motor humming along like a faithful pet.

Society will intrude on you later, and you know it.
The fisherman is also a philosopher. You can’t escape yourself, and so the weary angler can benefit from self-awareness. A man’s nature is defined by his ability to handle problems. We cannot escape conflict, which is part of human nature. I have pondered the intricacies of the far galaxies while in a boat; and I have seen the satellites drifting across the midnight sky, and the falling meteors cutting a burning path toward earth. I have seen strange craft in the sky I cannot identify, and that was before dipping into the whiskey laced coffee.

Sitting in a boat on a lake at midnight, with the anchor resting in a musky den, can become cathartic for the man carrying a heavy weight. Our goal is generally to find serenity in a world that demonstrates absolute madness on a daily basis. Watching Internet news feeds can lead to insanity. Facebook is a bulletin board for dysfunctional egos set adrift on a digital sea of hatred and prejudice.

Surrounded by darkness, I recall a line from Homer’s The Odyssey: “No more lamentations now Odysseus! I know myself how many hardships you have suffered on the seas, and how many cruel enemies have attacked you on land!” The nearby call of a Loon; the soft splash of a bass breaking the surface and snatching an insect. The meteors fall and the Milky Way appears to spin ever so slowly.

I have friends who tell me they experience a sense of Deja vu when looking up at the stars. Why this feeling that we are being watched? The immediacy of modern life takes precedence over such lofty considerations. Your problems may be crouched in the shadows of your mind, but all you see is water and a shoreline thick with pines. Memories crowd us, like a spectacle in Technicolor; all the summer days of a long lost youth fishing in a boat like this one come rushing back. I can recall with astonishing clarity the voices of my parents, and of my uncles, too; their voices linger out there on the northern wind.

Drifting into a sunlit cove early in the morning, just before the sun breaks free of the treeline, offers a bounty of revelations. A civilization of wandering sunfish and small bass shake loose from their own cold, submerged slumbers and begin their atavistic circuit; a methodical flapping of gills and the instinctive push toward the shallows where the night’s drowned insects make a feast in order to fatten the sunfish for the cannibal pike.

A day fishing is often a day drifting, and the number of bass I catch is nominal. I have tracked the eagle’s flight as it circles the lake; and I have watched the eagle sit on a tall pine branch and tear a fish apart with its beak. I know a special tree that is a regular home to the eagle on a promontory of land we call Indian Point. At the base of this tall pine lie the shattered bones of bass and perch, a daily reminder of the eagle’s hunger, and the visceral need to survive. It is the same with men as it is with the eagle.

From my solitary perspective in the boat, the act of fishing is a way to touch that elusive part of our soul where all of the mysteries and conundrums of humanity dwell, and all too often as unreachable as the canny musky forty-feet down.

When the fishing and philosophizing is done, I turn the boat toward shore. If the wind picks up a little I can smell the pine, and then I’m ready to stop being alone and take to land again to plunder and live, a wanderer tending to his wounds.

NOTE: The quote from The Odyssey by Homer is from the Signet Classics Edition paperback, page 130, Book Ten, Island of the Winds. 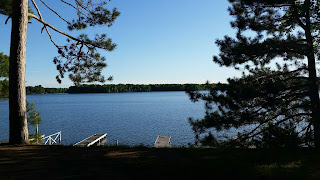 Posted by Thomas McNulty at 1:36 PM