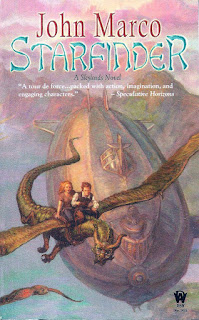 At some point I may compile a list of books with talking dragons that I enjoy. There are more than a few, and somehow that strikes me as odd. Dragon stories are fun – that word again; fun, a derivative, I believe, from Old English and meaning to hoax or amuse. Talking dragons. Just typing the words is amusing. Starfinder has a talking dragon in it named Merceron who wears spectacles and reads scholarly books. Merceron is old and he’s smart. John Marco has written a great fantasy novel that young readers and adults can both enjoy. The story is about young Moth who dreams of becoming a Skyknight. When his mentor Leroux dies he asks Moth to take his bird, Lady Esme, to the forbidden land called the Reach to save Lady Esme who is really a beautiful woman trapped in a bird’s body. Unraveling the mystery of Lady Esme with the help of Merceron are the plot’s driving points. John Marco does a wonderful job of world building in this character-driven tale. The Reach is a strange world populated by mermaids and other creatures, including Redeemers, a nasty bunch who work for The Skylords, the group that want the Starfinder which belongs to Moth. The Starfinder is an object that reads data from the constellations like a compass operating as a computer, but its other secrets are unknown to Moth. Credit goes to John Marco for keeping the fires of his fantastic imagination at the level of a blazing inferno. There are many other characters, too, each playing an integral part of the story, Fiona, Skyhigh Coralin, Rendor and his secrets. And dragons. Talking dragons. Starfinder is worth reading for those that enjoy such well-written fantasy tales. Jam-packed with memorable scenes, fascinating characters and an epic quest, this is one of my favorites. Marco leaves it open for a possible sequel. His other great novels include the Bronze Knight books, The Eyes of God, The Devil’s Armor, The Sword of Angels and The Forever Knight. For collectors Starfinder is Daw # 1473. Starfinder is an unforgettable and refreshing fantasy adventure that piles on the action.
Posted by Thomas McNulty at 8:20 PM