Hemingway In Love by A. E. Hotchner 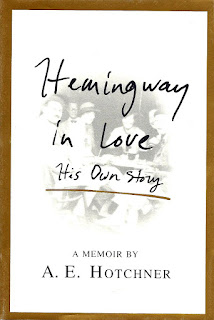 This short but insightful book reminded me of Hemingway’s incredible talent which is constantly being degraded by contemporary critics. I first attempted to read Hemingway in the mid-60s, but I was too young to grasp what I had in my hands. Still, I was intrigued. Hemingway was the guy that wrote books the adults talked about, and I was a classic bookworm kid. Scribners had published a uniform set without a dust jacket but a blue hardback cover with the titles in gold and Hemingway’s name embossed in silver below a silver quill pen. My parents added these to childhood collection with the intention I read them when I reached the point where I felt like I could handle them. They left it up to me. I still own that set of The Sun Also Rises, A Farewell to Arms and For Whom the Bell Tolls. I was captivated by Hemingway’s descriptive passages. Hemingway clicked with me in the next decade, before I was eighteen, and Hemingway takes up a lot of space in one of my bookcases today. I like to think the ghost of Hemingway haunts my den at midnight. I can pick up one of his books and I’m in Spain, or Cuba, or Paris. Hotchner’s previous book on his friend, Papa Hemingway, is also recommended reading. One of my prized possessions is Shameless Exploitation in Pursuit of the Common Good written by Hotchner with Paul Newman and signed by both. This is the Easton Press signed and numbered edition published in 2003. Hemingway In Love recounts details about his marriages that Hemingway entrusted to him but Hotchner never published until now. I found nothing scandalous, but I re-discovered Hemingway’s passion for life, and Hotchner’s passion to get the story right makes this a fine book for future Hemingway fans to study. Some of the details are slightly at odds with the accepted facts about Hemingway’s life, especially his romantic feelings toward Hadley Richardson, his first wife, and the destructive affair that destroyed their marriage. This book is at times poignant and fascinating in its emotional power. Scattered throughout the narrative you will find tidbits explaining the origins of various short stories. Included are reminisces of F. Scott Fitzgerald, Josephine Baker and many others. Now that I’ve read Hotchner’s book I’m going to re-read a neglected favorite, To Have and Have Not and probably The Snows of Kilimanjaro. Thanks, Hotch, you did this book right. I’m putting it up on that sagging shelf next to A Moveable Feast.
Posted by Thomas McNulty at 9:21 AM