The Dragon Engine by Andy Remic 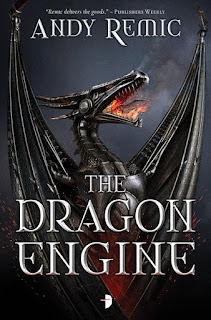 I sometimes buy books strictly on impulse. I might wander the aisles of Barnes & Noble for a solid thirty minutes before making a choice. That’s how I happened to pick up Andy Remic’s The Dragon Engine. The book is published by Angry Robot, another UK based company like Solaris with a catalogue of intriguing, well-written titles. I must have been in the mood for some blood and thunder prose because I really connected with Remic’s calloused writing. There’s a dash of David Gemmell here and a dash of Robert E. Howard, yet Remic’s wild imagination percolates on each page. The Dragon Engine is the first in a series that will be called The Blood of the Dragon Empire and I’m on board to see how it plays out. The set-up is simple: six warrior join forces to track down a treasure that has healing powers. Their goal is to save the life of Jonti, one of their friends who also happens to be a skilled fighter herself. To find the dragon jewels they must travel to the mountains and locate the secret underground lair of the dragons which is guarded by the Dwarf Lords. These Harborym Dwarves are about as nasty as dwarves can get. The first one hundred pages are devoted to character development and in setting the plot in motion. After that things get wild and you’ll come to hate the Harborym Dwarves as much as Beetrax, Dake, Jonti, Talon and Sakora. A sixth adventurer, Jael, is picked up along the way. The battle scenes late in the book are exceptionally brutal. Some of these characters are like Conan on steroids. Remic writes a nifty, hard-boiled tale with stark images, solid plotting, and great action scenes. This is a dark world, but it’s a grand tale after all, and I thought it was tremendous. Immediately after finishing this book I logged onto Amazon and ordered Remic’s The Clockwork Vampire Chronicles which collects the novels Kell’s Legend, Soul Stealers, and Vampire Warlords. I plan on finishing that before the next installment of The Blood of the Dragon Empire. Meanwhile, sharpen your axe and go into battle with The Dragon Engine. It’s bloody good.
Posted by Thomas McNulty at 5:10 PM