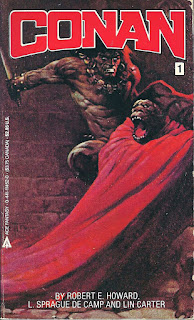 I was introduced to Robert E. Howard’s iconic character courtesy of L. Sprague de Camp and Lin Carter in the late 1960s when they began compiling Howard’s stories and publishing them in paperback, coupled with original Conan stories of their own. My intention was to inaugurate Conan to this blog with a post about Conan the Buccaneer, one of my favorite of the de Camp and Carter pastiche novels. But then I would have slighted Robert E. Howard and I couldn’t do it. Robert E. Howard is one of the reasons I became interested in pulp fiction to begin with. 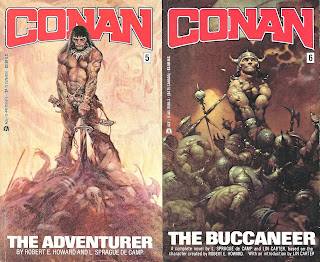 My purpose here isn’t to say anything profound about either Robert E. Howard or Conan the barbarian. I belong to the gee-whiz geekdom school of Conan fans. Robert E. Howard’s prose is lush, ripe with imagery, and thriving with the pulse-beat of a man that loved to write. Conan, his greatest creation, is a man’s man. He doesn’t apologize; he doesn’t surrender. His world is occupied by haunted castles and tombs, horrifying monsters and naked or half-naked beautiful women. Violence is a way of life. The many comic book adaptations of Howard’s work all capitalized on these elements to great effect. I suppose in these politically correct times it’s inappropriate to admit that I bought those comic books and paperbacks because I loved the half-naked women on the covers, but I did. I still do. Take a tip from Conan himself and don’t apologize for a being a man. What we call Political Correctness is just another form of Puritanism.

Conan sought treasures and women and battles with an enthusiasm that is contagious. Robert E. Howard must have channeled some wild forefathers of his when he penned those wonderful tales. I re-read Howard’s stories often. Not just Conan, but his Solomon Kane stories and the Bran Mak Morn tales and the Kull stories. Del Rey has published eleven volumes collecting most of Howard’s stories and the three Conan volumes - The Coming of Conan the Cimmerian (2003), The Bloody Crown of Conan (2003) and The Conquering Sword of Conan (2005) - should be considered the definitive Conan collections.

Of the Marvel comics I preferred the magazine The Savage Sword of Conan which featured great artwork and visually exciting battle scenes. The great Earl Norem provided a lot of the cover art. I still harbor a fondness for those L. Sprague de Camp and Lin Carter paperbacks from Ace, but I enjoyed Robert Jordan’s Conan stories, too. Conan in films is also quite appealing, no matter if you like Arnold Schawrzenegger or not (I do, and I enjoyed Jason Momoa in the underrated Conan the Barbarian (2011). 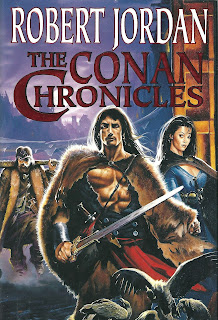 The Del Rey/Ballantine editions are historically significant and I hope they remain in print. Re-reading the stories today it’s easy to track Robert E. Howard’s progress as the character developed. Of course his wild imagination jumps off the page. That first story, “The Phoenix on the Sword” always felt incomplete, and I think Howard was just getting a handle on it. The same with “The Frost-Giant’s Daughter,” but then he wrote “The God in the Bowl,” and “The Tower of the Elephant.” These are solid stories. Then followed “The Scarlet Citadel” and “The Queen of the Black Coast.” Conan was very much alive and must have walked side by side with Robert E. Howard until his untimely death. 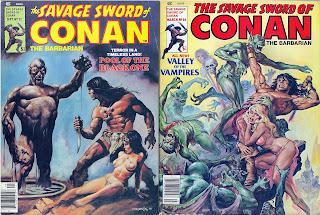 I’ve listened to far more knowledgeable fans than I talk about their favorite Conan stories, and their enthusiasm and even devotion to Howard is something I appreciate. I cannot fathom how the act of reading can be made more appealing to a young person interested in the creative arts than with material like “Beyond the Black River” or “Red Nails.” This is not only fuel for hungry imaginations, but incredibly entertaining fiction. Is it wrong to suggest that Robert E. Howard’s stories should replace “Death of a Salesman” in High School curriculums? “Death of a Salesman” has literary value, but the fact is most young readers find the book depressing and boring. They’re right. Our educators have got it wrong. They’re forcing what they perceive to be “meaningful” literature onto a populace that wants to be entertained. The basic elements of storytelling can be taught well enough by using examples of Robert E. Howard’s fiction, or any of the great pulp writers for that matter. 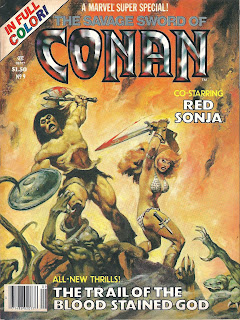 The literary value of pulp fiction from the 30s and 40s has undergone a critical re-evaluation resulting in wide-spread academic acceptance. It is no longer anathema to use the phrase “Pulp Fiction” in regards to any work of literature, but there are still many high-brow critics who readily dismiss Howard’s work. Part of this dismissal stems from religious ideology or academic posturing. Ultimately, critics like Harold Bloom are as interesting as a sprinkling of dandruff. 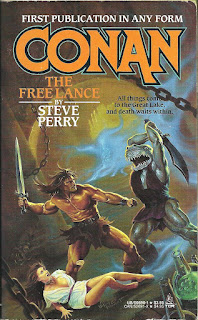 Case in point: the first paragraph from “The Hour of the Dragon,” a novella serialized in Weird Tales from December 1935 through April, 1936:

The long tapers flickered, sending the black shadows wavering along the walls, and the velvet tapestries rippled. Yet there was no wind in the chamber. Four men stood about the ebony table on which lay the green sarcophagus that gleamed like carven jade. In the upraised hand of each man a curious black candle burned with a weird greenish light. Outside was night and a lost wind moaning among the black trees.

Note the profusion of strong images in tandem with setting the scene. That’s about as fine a first paragraph as you’ll see in all of literature. It succeeds in capturing a reader’s attention while putting into motion the basic elements of pure storytelling. 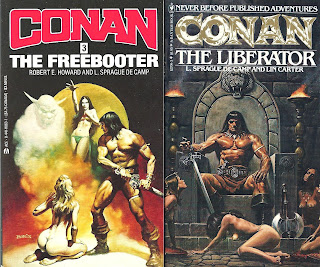 It has always been Robert E. Howard’s fans that make the difference, and even if you didn’t think those TOR writers were as good as Howard himself, I salute them for their effort. So here’s a nod to Karl Edward Wagner, Bjorn Nyberg, Steve Perry, Robert Jordan, Leonard Carpenter, John C. Hocking, Andrew J. Offutt, John Maddox Roberts, Roland Green, and Sean A. Moore. I bought them occasionally and never really disliked any of them. Conan is larger-than-life, a mythic figure equally as appealing as King Arthur, Robin Hood, Captain Blood, and Zorro. 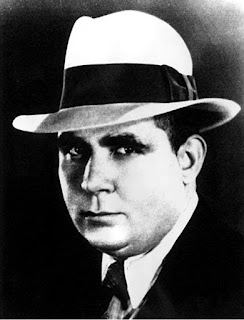 Posted by Thomas McNulty at 7:43 AM