The Tomb of Terror from Harvey Publications 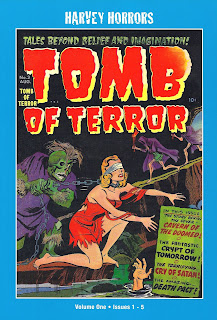 The Tomb of Terror premiered with a cover date of June, 1952 and featured four stories. This was the era prior to psychiatrist Frederic Wertham waging his moral war on popular culture with his book Seduction of the Innocent (1954) which hypothesized that such publications had a negative impact on America’s impressionable youth. I’ve read Seduction of the Innocent and it really boils down to Wertham asserting his fractured psychiatric principals on a public that he clearly thought was too stupid to differentiate reality from fantasy. The Tomb of Terror was competing with EC Comics for a secure position in the horror genre but they never really succeeded at the same level as EC titles such as Tales from the Crypt or Weird Fantasy. PS Artbooks have reprinted the Harvey horror titles. Also available are The Chamber of Chills, Witches Tales and Black Cat. These are facsimile reproductions. The paper quality is better than the original and the covers are printed as glossies. The stories are short, cheesy and fun. I love quality, full-color comic book reproductions and The Tomb of Terror tickled my fancy. I suppose old Frederic Wertham would have a stroke to learn that today these comic books are as popular as ever. Such books have an after-life that rivals the ghosts and creatures and muck-encrusted monsters that populate their pages. The titles alone are mouth-watering: “The Dead Awaken,” “The Thing From the Center of the Earth,” “The Cult of Evil,” “The Crypt of Death,” and “Graveyard Monsters” to name a few. Put this one next your pumpkin and lite a candle to keep the dark creatures at bay. Then, just before midnight curl up in a chair begin reading these Harvey horror classics. You know you want to. Just do it. 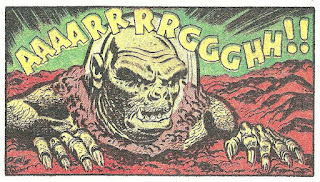 Posted by Thomas McNulty at 7:49 PM