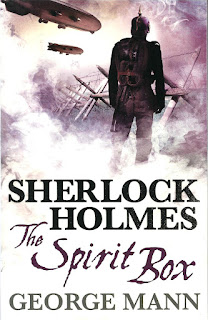 Five novels by George Mann. That was when I realized I was a George Mann fan. I had just purchased Sherlock Holmes: The Spirit Box in Barnes and Noble, took it home, sat down to read it, and enjoyed every Sherlockian moment. Then I ruffled through my bookcase to set the book next to my other George Mann novels and realized I own five. The first one I read was called Ghosts of Manhattan, a fantasy fusing Steampunk with Science Fiction; and then I read the sequel, Ghosts of War. Somewhere along the way I picked up The Affinity Bridge, part of a series featuring his characters Maurice Newbury and Veronica Hobbes, an alternate history blend that was wonderful to read. The next Newbury and Hobbes tale I read was The Osiris Ritual. I bought Sherlock Holmes: The Spirit Box without realizing it was a fusion of the Newbury and Hobbes universe with Sherlock Holmes. Somehow Mann manages to remain true to Arthur Conan Doyle’s character while putting his unique spin on the story. No easy task, but Mann pulls it off rather cleverly, and he never forces the issue. The characterization of Holmes and Watson is spot-on. A string of mysterious suicides brings Holmes out of retirement and his ongoing studies of bees (a sly nod to H. F. Heard’s A Taste for Honey). Are these suicides connected to something called “The Spirit Box” and if so, what does it all mean? Bordering on the supernatural, Sherlock Holmes: The Spirit Box is an unusual but satisfying Doyle/Holmes pastiche. After reading this one I tracked down Mann’s other Holmes book, Sherlock Holmes: The Will of the Dead, which was published first. I now own six novels by George Mann.
Posted by Thomas McNulty at 5:18 PM