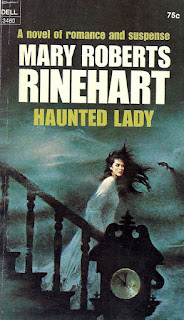 By the time Mary Roberts Rinehart died in 1958 her books had been bestsellers for half a century. During that 30 year span of the 1950s through the 1970s her novels had been reprinted dozens of times. Those were the pocket paperback’s glory days. A spinning wire rack of paperbacks always had titles by Mary Roberts Rinehart. In the neighborhood where I grew up all of the older women read her books. Her titles spun at me from the rack, were peeked at sticking out of a purse, or were noticed on a table next to a coffee cup and a pack of menthol cigarettes. The Circular Staircase, The Street of Seven Stars, and The Bat and more all registered on my consciousness. I love the cover for this May 1971 reprint of Haunted Lady from Dell Publishing, originally published in 1942. The novel’s protagonist, Hilda Adams, appeared in several other novels by Rinehart. Naturally, as an impressionable kid I picked these up because I liked the covers. Initially, I was always a little disappointed because there were never any monsters, only stuffy villains. I did enjoy the pointed writing and general creepiness. But as I became a little more sophisticated in my reading I began to appreciate her ability to build suspense and set a scene. Rinehart really mastered the Gothic Mystery. In Haunted Lady, Hilda Adams is visiting the Fairbanks Mansion as a nurse-companion to old Eliza Fairbanks and soon discovers that someone living in that mansion is up to no good. Is the Fairbanks fortune being targeted? Nothing astounding happens, as this is a simple parlor room mystery. Rinehart is credited as being the writer responsible for the cliché “The Butler did it” as a result of the denouement in her 1930 novel, The Door. Sometimes I think of her female protagonists as adult versions of Nancy Drew, but less exciting. Modern readers will bemoan the lack of saucy romance. Rinehart is an acquired taste; she’s good once in awhile when you have a taste for a leisurely mystery.
Posted by Thomas McNulty at 9:10 AM