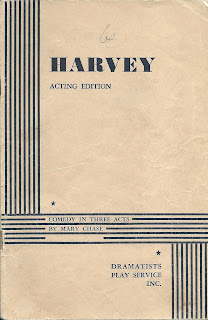 It is the James Stewart film version that made the play a cultural theatrical icon. Released in October 1950, “Harvey” is one of Stewart’s best films. I first saw this production on television in the early 1960s and soon thereafter it was one of my mother’s first theatrical performances. She played Myrtle at the Twilight Ridge Playhouse in Crystal Lake, Illinois. “Harvey” is one of my favorite films. I have seen numerous stage productions as well, and because of the film’s influence many of the stage productions suffer from “The Hollywood Syndrome;” meaning, frankly, that the lead actor mistakenly plays Elwood P. Dowd as an imitation of James Stewart. I have seen the same thing happen to productions of Arsenic and Old Lace by Joseph Kesselring and On Golden Pond by Ernest Thompson. Imitating Cary Grant in Arsenic and Old Lace and Katherine Hepburn in On Golden Pond is always a critical error. This speaks to the great power of motion pictures but one is advised to avoid such hackneyed stage versions with the identical diligence in which we avoid contact with the bubonic plague. As a point of trivia, many decades later my mother was cast in On Golden Pond and she wisely avoided the Hepburn imitation. And Hepburn, that darling blueblood actress, sent my mother a signed personal good luck wish on opening night.

“Harvey” is a cleverly written fantasy. Outside of the casting problems, several other problems often cripple modern stage productions. The first of these problems being that the director and actors don’t understand the material. This fact is made difficult by their perception of Harvey himself. Is the rabbit real or imaginary? The play itself tackles this very question throughout its three acts. So let’s cut to the chase, to use a film term, and clear the air. In Mary Chase’s play Harvey is real. There is textual evidence in the play to support this statement. Harvey is not a figment of Elwood’s imagination. At the end of Act One, Wislon picks up the Encyclopedia and reads out loud the entry on a “Pookas”

Pooka. From old Celtic mythology. A fairy spirit in animal form. Always very large. The pooka appears here and there, now and then, to this one and that one at his own caprice. A wise but mischievous creature. Very fond of rum-pots, crack-pots, and how are you Mr. Wilson...

Startled, Wilson closes the book. In one deft moment the author defines Harvey’s identity and has him speak with a character on stage. Secondly, Elwood P. Dowd really is an alcoholic. Thus, the emotional conflict of Elwood being a friendly alcoholic who really does have an invisible six foot tall rabbit as a friend can only be resolved with acceptance. The actor should not play him strictly as an alcoholic. Harvey is real, and so is the booze. This puts an entirely different light on Elwood’s character. The heart of Elwood’s character comes in a piece of dialogue in Act Two, scene 2:

Harvey and I sit in the bars and we have a drink or two and play the jukebox. Soon the faces of the other people turn toward mine and smile. They are saying: ‘We don’t know your name, Mister, but you’re a lovely fellow.’ Harvey and I warm ourselves in all these golden moments. We have entered as strangers – soon we have friends. They come over. They sit with us. They drink with us. They talk to us. They tell about the big terrible things they have done. The big wonderful things they will do. Their hopes, their regrets, their loves, their hates. All very large because nobody ever brings anything small into a bar. Then I introduce them to Harvey. And he is bigger and grander than anything they offer me. When they leave, they leave impressed.

This dialogue is the key to understanding Elwood P. Dowd. Elwood is a tragic figure, eternally amiable, basking in the benefit of Harvey’s friendship and ultimately expressing the universal desire for happiness. The comedy involves Elwood’s family’s attempts to have him placed in a psychiatric institution. Eventually, the intimation develops where the audience is cognizant that other people can see Harvey, too, but they pretend not to. None of these elements are blatant, and they develop slowly with bits of dialogue and stage gimmicks with doors opening by themselves.

James Stewart was the perfect actor to portray Elwood. A tall and lanky Midwesterner who could affect an appropriate drawl, his embodiment of Elwood is certainly definitive. In addition to the 1950 movie, there are several filmed stage performances of Stewart reprising the role later in life. All of these are worthy of your attention, but the film, even with its modest changes, offers a brilliant character study that is both superbly written and acted. Aren’t we all waiting for those golden moments, too?

“Harvey” plays on the boards infrequently these days. Perhaps such plays are considered too quaint by today’s disaffected and floppy pants crowd of thespians. I can think of dozens of talented actors in Hollywood who could play Elwood P. Dowd as Elwood P. Dowd on stage effectively, but I don’t have any desire to see a film remake. We already have Stewart’s classic. For those of you that haven’t read the play it is easily found on Amazon, and the film is available on DVD. Together, they make for two charming entertainments, and thank you, Mr. McNulty, for bringing attention to us neglected pookas.... 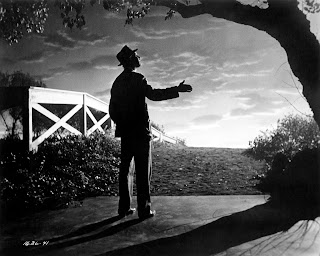 Posted by Thomas McNulty at 2:17 PM