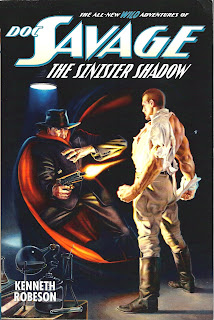 Will Murray’s latest Doc Savage novel for Altus Press teams Doc with The Shadow in their first full-length adventure. The book is truly fantastic and the best of Murray’s Doc Savage novels to date. Best of all, Murray handles The Shadow with the same skill and talent for storytelling as Walter B. Gibson, who, as you all know, wrote most of the original Shadow novels. This pairing of pulp fiction’s two greatest characters is a landmark event that I’m pleased to see is getting good exposure. Doc Savage: The Sinister Shadow is a reader’s delight and page-turning thrill ride from start to finish. This publication is a feather in the cap for both Will Murray and Altus Press. The stunning cover is once again by the great Joe Devito. A tip of the fedora to Lester Dent, scribe of the original Doc Savage series, whose story notes provided Murray with some key plot elements. It all begins when millionaire Lamont Cranston and attorney Ham Brooks are kidnapped by the evil criminal known as The Funeral Director. When another attorney is murdered the noted criminologist, George Clarendon, finds himself involved in a deadly plot that threatens them all. Long time Shadow fans will appreciate Murray’s handling of Clarendon and Cranston, both of whom have strong ties to The Shadow. As always Murray’s knowledge and characterization of Doc Savage is great, but this volume is really a showcase for The Shadow. There’s no question that I and other readers are now praying Murray will write not only some stand-alone Shadow novels, but will eventually re-team pulp fiction’s two greatest heroes yet again. The Shadow sequences are appropriately creepy, wildly mysterious, and tightly plotted. Doc Savage: The Sinister Shadow ends on page 466 and it’s a long and exciting ride. The concluding sequence in a graveyard and crematorium succeed in capturing the flavor of the moody original Shadow stories. Intensely imaginative and pulse-pounding from the start, Doc Savage: The Sinister Shadow is a sure-fire collector’s items for fans of adventure fiction. Kudos!
Posted by Thomas McNulty at 10:31 AM