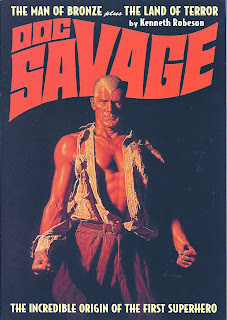 When Bantam books began republishing the Doc Savage novels in 1964 with cover artwork by James Bama they ushered in a revival of interest in the pulp era that has never abated. The James Bama artwork, using actor and model Steve Holland’s weathered visage, had an immediate effect on the paperback shopper. The Doc Savage books flew off those spinning racks. Doc Savage was a hot property again.
I’ll repeat some well-known facts for the benefit of readers coming to the dance late. Lester Dent wrote most of the Doc Savage novels under the Kenneth Robeson pseudonym between 1933 and 1949. Doc Savage was created to capitalize on the popularity of The Shadow, publisher Street and Smith’s phenomenally successful monthly pulp magazine. Bantam re-published over a hundred Doc Savage paperbacks and reprinted each one several times. 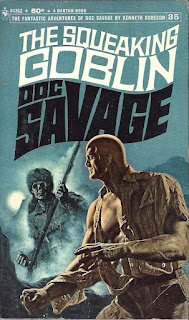 Lester Dent passed away in 1959 and I encountered Doc Savage about ten years later. Those James Bama covers had an effect equal to the stunning artwork Jack Kirby was producing for Marvel Comics; the images were larger-than-life, masculine, and wildly imaginative. At 45 cents or 75 cents a copy I was hooked. The James Bama artwork captured the flavor of the pulp adventure magazines and Doc himself appeared superhuman. Bama depicted Doc as a muscular giant with short-cropped golden hair cut into a form fitting style. Actor Steve Holland’s features added a menacing tone. Doc was formidable, and much different than his original cover appearances by Walter Baumhofer where he looked rugged but traditionally good-looking. In fact, James Bama’s depiction is uncannily close to Lester Dent’s original vision in The Man of Bronze, chapter one: “The bronze of the hair was a little darker than the bronze of the features. The hair was straight, and lay down tightly as a metal skullcap.” Other artists employed by Bantam Book such as Boris Vallejo and Bob Larkin all rendered Doc as Bama saw him. Best of all Dent’s prose crackled with energy and imagination. Doc Savage was old but new again. 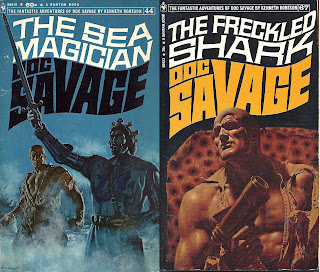 One of the myriad pleasures of being a reader and book collector are the fond memories these tales evoke. Doc was with me at our first campsite at Buffalo Lake in the early 70s where Doc and I took on The Pirate’s Ghost with great success. We found The Polar Treasure together, and survived The Meteor Menace. Together we solved The Mystery Under the Sea and defeated The Squeaking Goblin. My craving for adventure was satisfied with The Haunted Ocean and The Golden Peril. Doc was with me again when I camped in the San Gabriel mountains for the first time; my little box of paperbacks and comic books I hauled along on our cross-country trips relied heavily on favorites like Doc Savage to make rainy days tolerable. The Munitions Master and The Roar Devil were tasty deserts savored beneath the western sky. 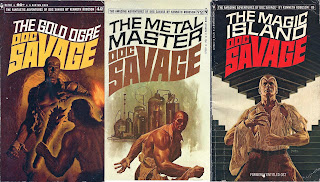 Once up near Little St. Germain, I met some distant cousins, brothers, who were so excited about their Doc Savage paperback collection that they were unable to discuss any other topic. Together, they bounded through the forest trails emulating Doc, Monk, or Renny. Evil-doers beware, for when the fires of a youthful imagination are stoked all villains will be vanquished by a pummeling of massive fists. 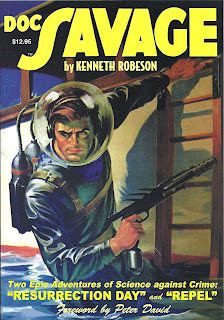 Doc Savage taught me the value of a dollar. With little money to spend on my voracious reading habit, I discovered that being employed as a dishwasher (and soon as a bus-boy) helped satisfy my craving. I now had choices to make. Should I purchase the latest Marvel Comic or opt for a paperback? I learned how to budget for a month, and how to bust that budget wide-open with an impetuous splurge. My only regret then as now being that I couldn’t buy it all. But I sure as hell tried. 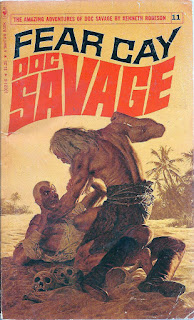 Some of you may be surprised to learn that bookstores were not all that common back then. The great era of nation-wide chain bookstores had yet to begin. Paperbacks were sold by retail operators on spinning wire racks. Some of the major department stores like Wieboldt’s, Marshal Fields, Macy’s and Montgomery Wards all featured “Book Departments” which served as a major source for readers. Smaller stores and local pharmacies always had a spinning rack or two of paperbacks. I bought my comic books and paperbacks where I encountered them, including a tobacco shop, a bowling alley and a Woolworth’s Diner. The Evil Gnome, Land of Always Night, The Phantom City, The Mountain Monster, Poison Island, The Midas Man and The Mental Wizard were all captured on my radar. Somewhere I noticed the books were numbered and I began filling in gaps. The Doc Savage paperbacks seemed endless and I thought they would go on forever. There were originally 181 Doc savage novels published. Bantam initially reprinted 96 and supplanted this with “Double” editions. 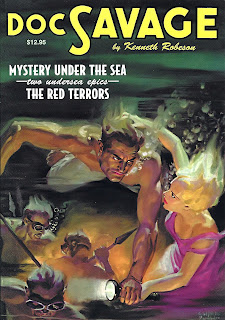 I recall being told by more than one old timer Doc Savage, Superman, Batman and other cultural icons were around long before “you were a twinkle in your papa’s eye.” So it was that Doc Savage bridged the “generation gap.” Doc was just as cool in 1968 as he was in 1934. Collectors of the Bantam series are as passionate for their Doc Savage paperbacks as I am. I have met fellow collectors across the country who are happy to recount their experiences when they encountered the Bantam editions all those years ago. For many, they might not have picked up their first one until the reprint series was well under way. No matter if it was The Lost Oasis (#6) or Fear Cay (#11) or maybe even The Land of Long Ju Ju (#47), their enthusiasm was apparent in their faces. Doc Savage has added quality to a great many lives and in ways that perhaps Lester Dent might not have imagined, but if he were here today I think he would be pleased to know it. 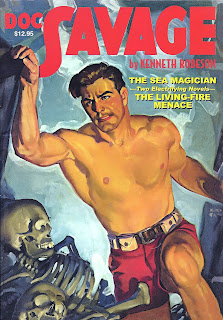 Lester Dent’s prose is marvelous. I recently re-read The Squeaking Goblin and it holds up well. I enjoyed it so much more than most of today’s thriller best-sellers that are all padded with unnecessary scenes. A Lester Dent story means non-stop action. No sooner does Doc and the boys find themselves in one predicament than they’re forced to untangle themselves from another predicament. Doc is the center piece, as brilliant as Sherlock Holmes and as strong and agile as Hercules. 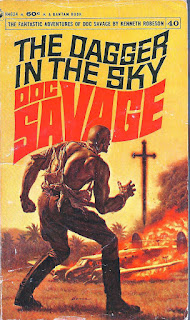 Like most Doc Savage fans, I wasn’t too thrilled with the 1972 film version starring Ron Ely, but I met Ely years later and I liked him immensely. Having also played Tarzan, he’s aware that he played two of pulp fiction’s best characters, and he seems grateful that anyone remembers him. Hollywood is rumored to have another Doc Savage film in the works, and we can only hope that it’s a good one. 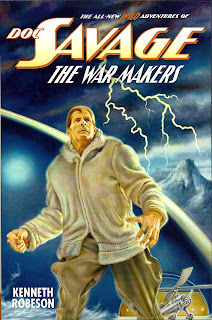 Thanks to author Will Murray, Altus Press and cover artist Joe DeVito, Doc is very much alive in a series of new adventures that recently teamed Doc with The Shadow for the first time. Joe DeVito’s fantastic artwork pays tribute to both James Bama and Steve Holland while capturing the high-octane flavor of the Doc Savage legacy. Will Murray’s stories are every bit as exciting as those written by Lester Dent. Facsimile editions of the original pulps are also available from Nostalgia Ventures. 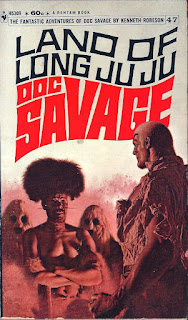 Today I hunt for duplicates of favorites or for copies in better condition than what I own. None of the titles are especially rare, and prices vary. E-bay is a great source for the collector with Buddha’s patience. Whatever you want will eventually be found on E-bay. Flea markets, used book sellers, and antique shops are regular sources for me. 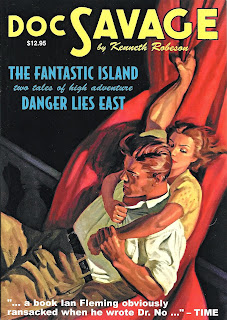 Some few decades ago I found myself on a back-trail in that faraway country where the pines touch heaven, and when it began to rain I did what most experienced campers do – I pitched the tent and hunkered down with a Coleman oil-lamp and pulled a Doc Savage paperback from my rucksack and began reading. I had a long way yet to go on that trip, and Doc took me even further and to strange lands. I have walked in two worlds; one of my own design and one created by Lester Dent. Who could ask for a better path?
Posted by Thomas McNulty at 2:34 PM