The Forgotten Door by Alexander Key 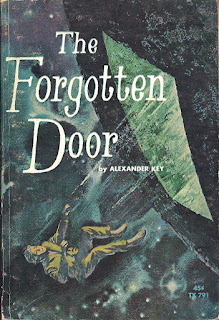 Avid readers such as myself usually hold dear many of the books we read as children. This holds true for The Forgotten Door by Alexander Key, a 1965 entry from Scholastic Books. I recall ordering it because the cover intrigued me. I re-read it to see how it holds up – it does hold up very well – and I was struck by certain oddities. The plot is about a boy who falls through a “forgotten door” from another dimension and finds himself on earth in our time. He can communicate with animals and possibly read minds. What I found strange was that Key never really explains where the boy comes from. Is it another dimension or another planet or both? Ultimately it doesn’t matter, because his plight is made interesting by the challenges he faces. The boy has amnesia but possesses the ability to assimilate and understand languages swiftly. He’s taken in by a kind family who initially protect him. Believing him to be a poor boy with amnesia, they create a fake name for him, Jon, but this begins to unravel when he is accused of stealing. As things unravel, it becomes obvious to the Bean family, who are protecting him, that he is not all that he appears. The Forgotten Door is simplistic but intriguing because of the plot. While Jon’s origins are never fully explained, I think that helps add to the allure. I’ve seen reviewers comparing this plot to the film ET the Extraterrestrial although Key never comes out and refers to Jon as an alien. Alexander Key is best known as the author of Escape to Witch Mountain. The other book of his that I recommend is a neglected piece of literature titled The Wrath and the Wind, published in 1949 and was reprinted as a Popular Library paperback in 1954. I’ll review that one at a later date.
Posted by Thomas McNulty at 6:54 PM