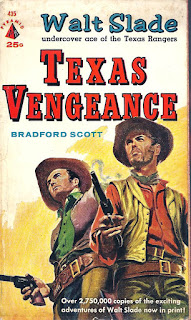 Have you ever walked into an antique shop far from home, smelled the mold and thought to yourself: “They have old paperbacks and magazines in here.” Texas Vengeance by Bradford Scott came to me from such a place. I bought it because I had read other Westerns by Bradford Scott (whose real name was Alexander Leslie Scott) and I liked his character, Walt Slade. Scott published over a hundred Walt Slade novellas. Filled with energy and non-stop action and suspense, a “Walt Slade” Western was once as popular and as easy to find as today’s Star Wars or Star Trek novels. Bradford Scott died in 1974, right about the time I started reading his paperbacks. They were easier to find back them, and they were already considered a nostalgic part of our cultural history. As you undoubtedly already know, book hunting is something that happens in phases. You can go long stretches without seeing the things you like, but later you’ll encounter a group of them at unexpected times. In this one, Slade gets in the middle of a feud that could lead to a range war. His activities as a Ranger are known to many. Pyramid Books advertised Slade as an “ace lieutenant of the Texas Rangers” and “the man most feared by the owlhoots and dry-gulchers of the old Texas border.” Bradford Scott handled it all fairly well, and sometimes he surprises me with wild lines like this one on page 108: “The unreasoning panic of sheer terror surged over Slade like the waves of the Atlantic over a lost continent.” Hyperbolic passages are part and parcel to a Walt Slade adventure. I have a nice stack of Bradford Scott Westerns but I’ve always felt that I don’t have enough. I’ve enjoyed every one of them that I’ve read and I’m happy when I find them in those faraway antique shops or flea markets. Texas Vengeance was published in 1959.
Posted by Thomas McNulty at 6:28 PM