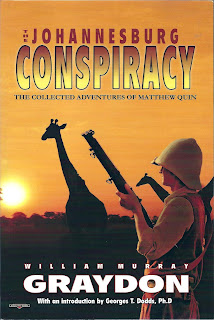 The Johannesburg Conspiracy is probably the most important book yet published by Black Dog Books. Collecting 46 stories and one novel featuring Matthew Quin, a famous trapper of wild beasts and wildlife agent for Karl Hamrach and Company, this book is a reminder of the lost worlds that can only be rediscovered thanks to author William Murray Graydon. The tales collected herein are works of fiction, but within these stories readers will span the globe and experience some startling adventures. Included is an introduction and bibliography by Georges T. Dodd, Ph.D which offers relevant background information. The stories themselves are quite good, although written in a leisurely and properly mannered style. Many of them are quite short and feel like partial vignettes. The stories involve Quin’s efforts and escapades at tracking and capturing various animals. His  adventures often put him a great peril, but some of the early stories are character studies and tall tales. Quin is all over the map. In “How I Lost My Elephant” he’s in Burma; in “The Black Panther From Hamburg” he’s in London (his home base); in “The Mystery of the Wrecked Circus Train” he’s in New York. You’ll find him in Montana and Arizona and, of course, Africa. By far, the highlight is the novel, In Wildest Africa published in 1910. This is the only full length Matthew Quin novel that Graydon wrote. None other than Theodore Roosevelt makes an appearance. The plot is straightforward. While on safari Quin discovers that his enemy, Tib Muhammed, is plotting to attack Roosevelt who is on a safari of his own. This plot is based upon an historical event. Roosevelt spent a year hunting in Africa and published his memories of these events, African Game Trails, the same year that In Wildest Africa was published. As for Tib Muhammed, this nefarious fellow met Quin in the Sexton Blake story, Sexton Blake in the Congo (1907). William Murray Graydon reportedly wrote several hundred Sexton Blake stories between 1905 and 1930. Graydon makes reference to Sexton Blake in chapter two of In Wildest Africa, thus connecting two once popular but now nearly forgotten fictional characters. The lost worlds of William Murray Graydon are quite fascinating if you take the time to explore them. Sexton Blake, a pulp magazine pastiche of Arthur Conan Doyle’s Sherlock Holmes, and trapper Matthew Quin would be forgotten if not for publications such as The Johannesburg Conspiracy and the current pulp revival. Concluding with In Wildest Africa, this collection was highly enjoyable. This book is sub-titled “The Collected Adventures of Matthew Quin” and the stories were published in such magazines and newspapers as The Hartford Courant, Boston Daily Globe, Budget Story Books, and Morning Oregonian between 1894 and 1913. Quin strikes me as the type of character that Michael Caine might have played effectively early in his career. I have never previously read anything by William Murray Graydon and was only vaguely familiar with his name because of the Sexton Blake connection. Thanks to this book I can easily understand his appeal. Congratulations to Tom Roberts and Black Dog books for publishing this historically significant and fascinating collection.
Posted by Thomas McNulty at 8:01 AM