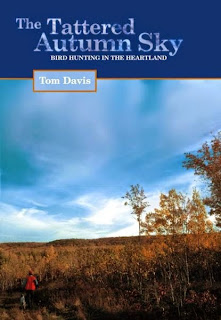 Published by The Lyons Press in 2004, The Tattered Autumn Sky collects twenty-five essays from such magazines as Gray’s Sporting Journal, Gun Dog, and Shooting Sportsman among others. Subtitled Bird Hunting in the Heartland, the prose is vivid and as refreshing as anything you’ll ever read. Tom Davis has published several other books, and I read Gray’s Sporting Journal for years because he had a regular feature. While the principal subject is bird hunting, Davis offers a collection that includes his substantial knowledge of gundogs and the outdoor experiences that draw so many of us to the wind-swept fields with a gun in our hands. Davis is an essayist who writes with a poet’s eye, a man’s thirst for adventure, and a painter’s appreciation for the complex yet beautiful landscape that he travels. He is obviously among my preferred hunters-turned-writers along with Peter Hathaway Capstick, Mike Gaddis, Guy de la Valdene and Robert F. Jones to whom this book was dedicated. Davis holds nothing back. His love for his dogs is sensitive and clearly a heartbreaking experience when one of them passes; his descriptions of the meals after a hunt, the hunt itself and the people that he encounters are all delineated with a craftsman’s skill. In one passage he describes an English setter as “bandy-legged, whiskery chinned,” (p. 117) and in another essay he tosses readers the line “The cold clutched at me like a beggar as I crawled back into the sleeping bag.” (p. 92) The people, places and hunting trips are as alive here as any narrative could make them. Davis makes no apologies and loves what he does, as he should. The topic is bird hunting but the stories are about life. These twenty-five essays will take you across the heartland, into tranquil afternoons and dark evenings, and the experiences will leave you as weary but as satisfied as Davis himself after a long day in the field. I have been enamored with this book since I first read it. I recommend it to readers all the time, no matter if you are a hunter or not. The Tattered Autumn Sky is the work of a fine writer.
Posted by Thomas McNulty at 4:38 PM