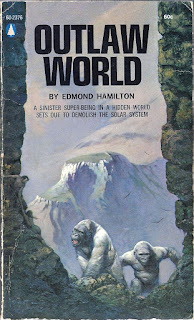 I love the smell of old paperbacks. They smell like adventure. This 70s era paperback from Popular Library had a great title and a great cover painting. The novel is a reprint of a 1945 Captain Future story from a pulp magazine. Captain Future was created by editor Mort Weisinger who hired Edmond Hamilton to write most of the stories. Weisinger and Hamilton would work together again at DC Comics where Hamilton wrote Superman stories in the 60s. Outlaw World is Space Opera all the way. Captain Future is “the young earthman who was the system’s greatest scientist-adventurer.” Raised by highly intelligent computer-robots after his parent’s death, young Curtis Newton would one day work for the Space Patrol with a myriad of friends to save the galaxy from evil and become known as Captain Future. Hamilton had the talent to make this all work, if not sound plausible. Outlaw World was approximately the nineteenth Captain Future story depending on the source you consult. In Outlaw World Future’s old nemesis, Ru Ghur, is plotting trouble on a faraway planet. It’s up to Captain Future to find Ru Ghur’s secret base and stop his deadly plot. The Captain Future stories all read like a re-imagined version of Alex Raymond’s Flash Gordon with a dash of Edgar Rice Burroughs thrown in. Wild and strange worlds, silver-winged bullet-shaped spaceships, a damsel or two in distress, and some All-American heroics punctuate the narrative. Edmond Hamilton was an entertaining and exciting writer with a great imagination. It’s popcorn literature that’s still fun to read. I’m convinced that Gene Roddenberry must have been influenced by the Captain Future stories when he created Star Trek, but I’ve never seen any reviewers make that connection. Read the stories and you’ll see what I mean. Star Trek is a direct descendant of the Captain Future stories and probably some of Jack Williamson’s The Legion of Space. Hafner Press has reprinted most of the Captain Future stories as deluxe hardcovers and some of them are already out of print.
Posted by Thomas McNulty at 7:29 PM