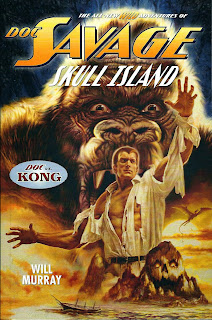 As I sat down to type my thoughts on Will Murray’s outstanding novel, I realized there is a generation that doesn’t know about Doc Savage. They don’t know about the pulps of the 30s and 40s, or about any of the dozens of writers and artists that made that era so exciting to readers of that fading generation. There is a generation out there raised on the glop of less talented writers like John Grisham and Scott Turow. There is a generation out there that never imagined there could be stories with titles like “The Spook Legion,” “The land of Terror,” “Mystery Under the Sea,” and so many more. They never heard the names Lester Dent, Kenneth Robeson, Monk Mayfair, Brigadier General Theodore Marley Brooks but known as “Ham,” or Colonel John “Renny” Renwick. If you happen to be one so unfortunate, start googling those names, learn the amazing history of Doc Savage, and then log onto Amazon.com and start ordering the books. Then hang onto your seat. You’re about to get your ass kicked by some of the best adventure stories ever written. Doc Savage – Clark Savage – is among the greatest fictional adventure heroes. For many readers, Doc Savage is number one. In Skull Island, Will Murray continues the tradition of high-octane thrills in a new novel that introduces Doc to King Kong. This fusion of Doc Savage with Merian C. Cooper’s classic 1933 film is a first-rate story. In the opening sequence, Doc Savage returns to New York just moments after Kong falls to his death from the Empire State building. This elicits an untold story from Savage that’s essentially his first adventure. It involves his father, Clark Savage Sr., and his grandfather, Stormalong. Young Doc and his father had met Kong on Skull island years before when they were searching for Stormalong who had been missing for several years. Once on the island, they soon discover that getting off the island won’t be quite as easy. Doc, his father and grandfather are besieged by angry natives who also want the head of Kong. Will Murray writes great adventure stories and I’m collecting all of his Doc Savage novels. Most of them are published under the Kenneth Robeson pseudonym, with the exception of Skull Island. I’ve met Will a few times at the Windy City Pulp and Paper Convention and he strikes me as a real gentleman. These Altus Press trade paperbacks are expensive - $24.95 – but still collector’s items. The fantastic cover artwork is by Joe DeVito.
Posted by Thomas McNulty at 7:03 PM