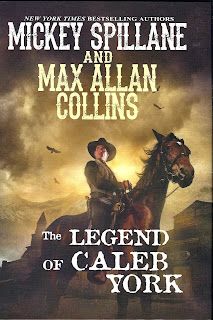 We bookhounds owe an immeasurable debt of gratitude to Max Allan Collins for writing The Legend of Caleb York. The story is based upon an un-produced screenplay that Mickey Spillane wrote for his friend, John Wayne. Spillane and Wayne had worked together before. Duke had hired Spillane to star in the 1954 film Ring of Fear, produced by Wayne’s Batjac Productions. Check out the DVD of that forgotten gem if you get a chance. In his introductory note, Collins describes these events and the Spillane-Wayne friendship that led to this screenplay. Little is known as to why the screenplay wasn’t produced, but Collins has added some meat and bones to what was obviously a potential customized story for John Wayne. The result is a lot of fun. The Legend of Caleb York is by no means a “classic” but it’s pretty damn good. I have read better Westerns, and naturally I have read worse. Collins is respectful of his source material, and he honors the Western genre with an old-fashioned Oater that might have once made a pretty damn good John Wayne film. Collins has not only given us another Mickey Spillane story, but he pays tribute to John Wayne with his characterization of Caleb York. Read this book and you’ll be able to visualize the Duke at about the time he made The Comancheros and The Sons of Katie Elder. This story would have fit right into that early to mid-60s period in Wayne’s career. Max Allan Collins is one of the great pros writing adventure novels, and the Western genre isn’t far removed from the hardboiled Nathan Heller mysteries that most of you are familiar with. Collins deserves the lion’s share of the credit here for taking a screenplay that’s over fifty years old and turning it into a solid prose entertainment. Years ago when I was working the Hollywood beat I interviewed several actors that worked with John Wayne. I remember Jeff Corey telling me, “He was the ballsy American type.” That sums him up, and that’s the character Collins gives us in The Legend of Caleb York. The plot is a stylized variation of “a stranger rode into town one day...” The rest is a tad traditional, but exciting nonetheless, and a bit talky in the middle. The book is easy to read and fairly short, and that works in its favor. Saddle up, pilgrims.
Posted by Thomas McNulty at 5:43 PM