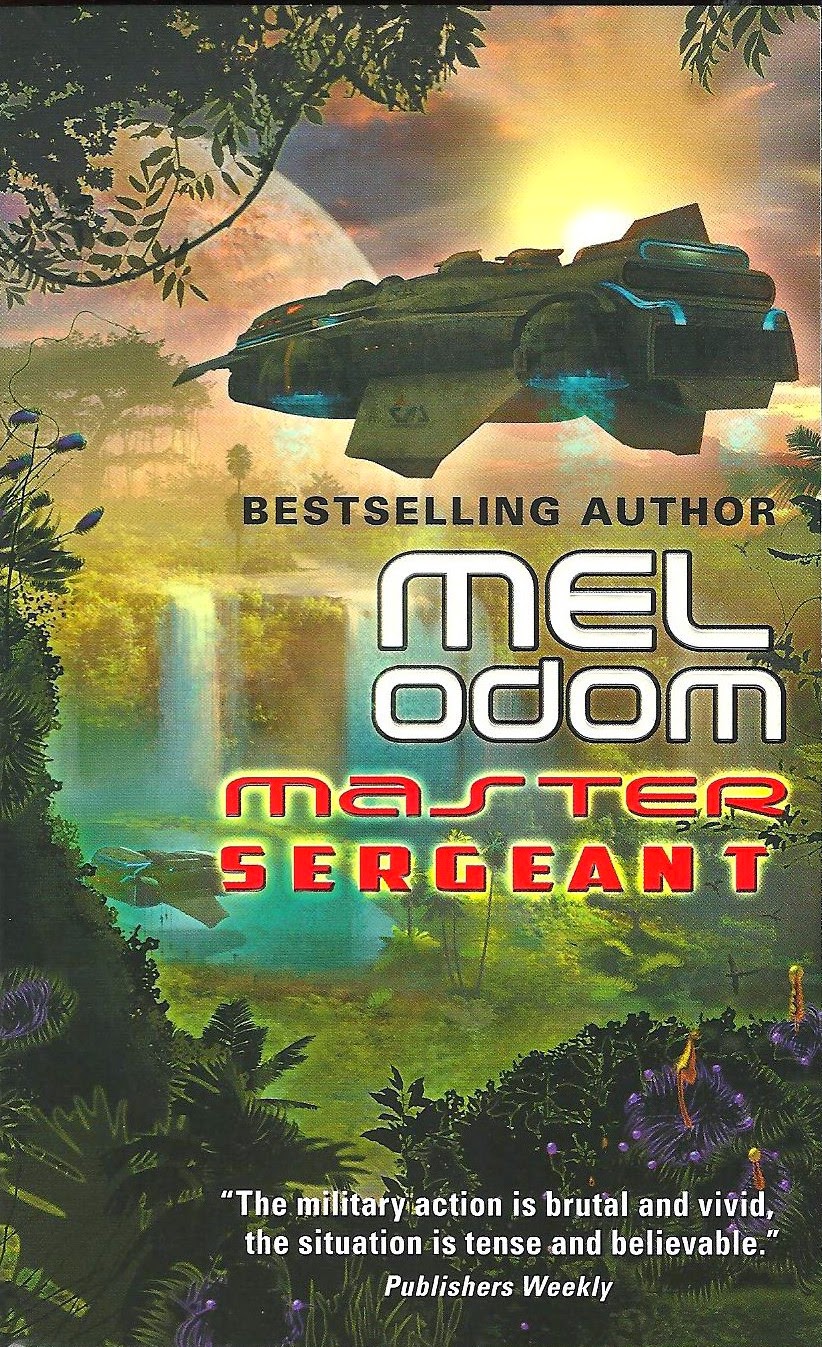 Master Sergeant is the best science fiction novel I’ve read in years. This book is a high-octane adventure classic starting on page one. My hyperbole and enthusiasm should not be dismissed as fanboy ranting, although I suppose that’s partially true. There’s nothing like a really great science fiction novel that’s well-written and fulfills your expectations from start to finish. Master Sergeant has the groove, it has the spunk, and it has the balls, if you’ll pardon the expression. Mel Odom is always good, but this one ranks up there as the best of the year. Mel Odom has written an adventure novel in the classic vein of pulp fiction and golden age science fiction. At its heart is master sergeant Frank Sage, a grizzled veteran of numerous intergalactic campaigns, relegated to Makaum but itching to be at the front line. Sage is a soldier and he wants to live like a soldier. Sage immediately gets into trouble because he’s more than a bit of rebel, but he’s a rebel that understands honor and loyalty. At the center of the Makaum conflict are the Terrans and Phrenorians. The Phrenorians are creepy insect-like humanoids, and some of the inhabitants on Makaum are up to no good themselves. Sorting out the good guys from the bad guys becomes a challenge as Sage puts together his own team for some undercover military action. On top of it all he has to deal with the planet itself – Makaum, also known as Loki 19, or “Green Hell” is planet where “everything wants to kill you.” The plants, insects, wildlife and other facets of the planet are all lethal. And please don’t dismiss Master Sergeant as Space Opera because it’s the best Space Opera you’ll ever read. The action scenes in this book are breathtaking and relentless. There are numerous villains in the book, but my favorite is Zhoh GhiCemid, a nasty Phrenorian who will give you the chills. Odom wisely devotes most chapters to Frank Sage, and only offers up chapters highlighting other characters when it’s necessary for the story. Too often I read science fiction novels where chapter after chapter details numerous secondary characters and I often wonder if those writers are doing that simply to jack-up the page count. Well, you don’t have to worry about that here. Mel Odom gives readers exactly what they want in a hardcore science fiction novel. I really can’t praise this book enough. Mel Odom’s Master Sergeant is the first in a series. I don’t know how many books are planned, but count me in. Master Sergeant is a rollicking great adventure novel.
Posted by Thomas McNulty at 5:43 PM