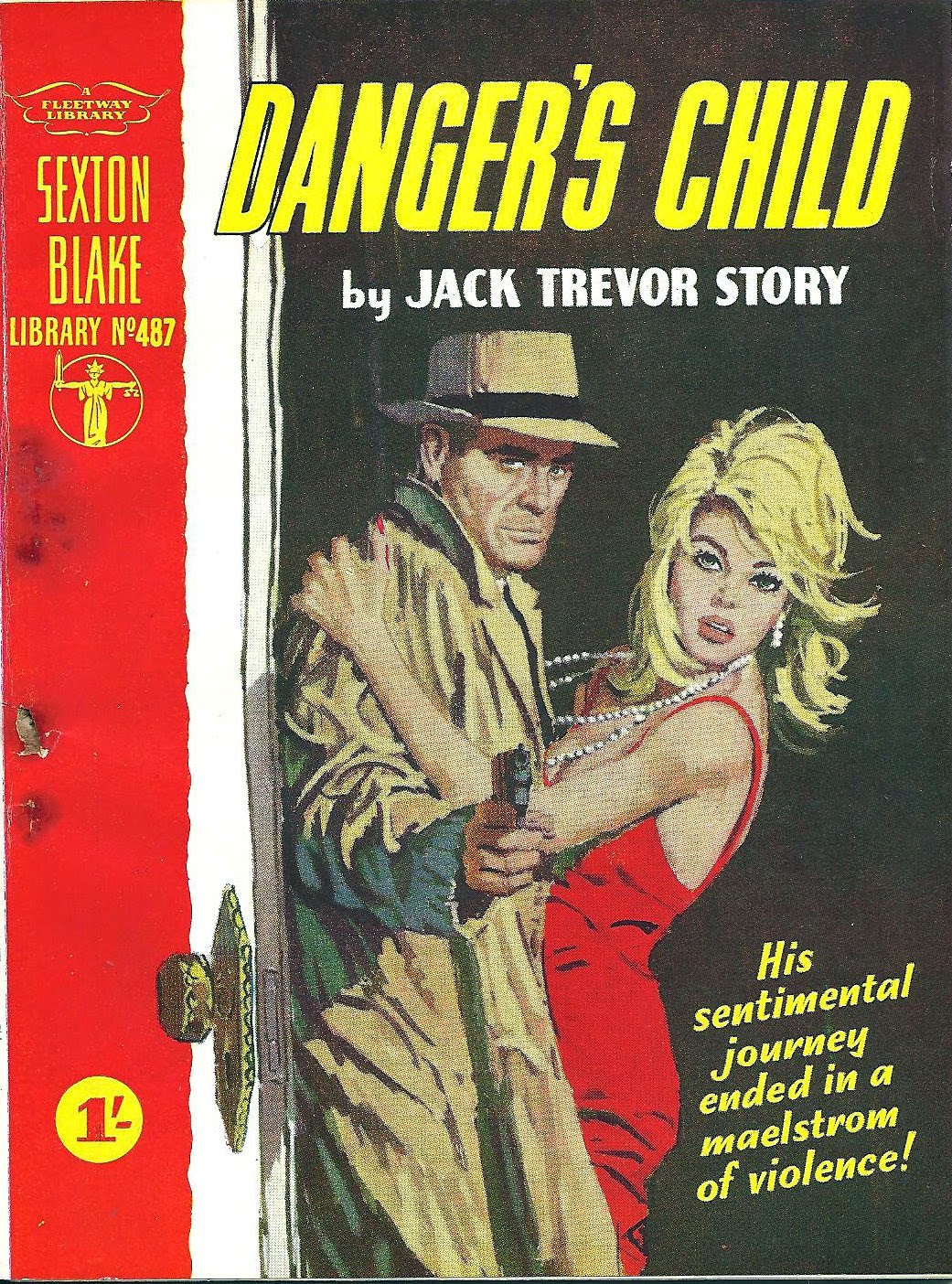 A tip of the Stetson to Keith Chapman, known to many of you as author
Chap O’Keefe, for sending me this week’s Sexton Blake novelette.

Although the Sexton Blake character is legendary, my previous encounters with him were limited to the American paperback editions credited to W. A. Ballinger. Titles such as The Witches of Notting Hill were well written and exciting. Those American paperbacks, and those under the pseudonym Peter Saxon, eventually introduced me to the work of W. Howard Baker and Wilfred McNeilly. Those two fine writers wrote many exciting Sexton Blake novelettes. I wouldn’t describe myself as a Sexton Blake enthusiast, and I’m no expert. I simply enjoy these little pulp magazine booklets from England. I pick them up now and again when I find them in good condition at an affordable price. Danger’s Child was published in November 1961 as # 487 in the long running series. Jack Trevor Story (Story IS his last name) is best known as the author of The Trouble With Harry which Alfred Hitchcock adapted to film. The Sexton Blake character first appeared in 1893, modeled after Sherlock Holmes, and was re-vamped in the mid 1950s to appeal to modern audiences. The Sexton Blake Library (SBL), an imprint published by Fleetway in London throughout the early 1960s was popular and featured exciting stories. Authors were given a by-line, although some were pseudonyms, such as Peter Saxon. Jack Trevor Story is no pseudonym, however, and I was hooked at the first paragraph. The set-up: Blake receives a plea from a girlfriend he hasn’t seen in twenty years. Her name is Charmian, and Blake reminisces, “Charmian is the only girl I ever contemplated marrying. This contemplation, real and fervent at the time, developed throughout that long river night in Granchester Meadows and went, quite abruptly, with the coming of a Byronic dawn in a Rupert Brooke sky.” It’s not that such a passage is brilliant (although it is) but rather that it fits the character. Blake, as Story interprets him, is well-read and fully expects his readers to understand such literary allusions. And by 1961 Blake is more James Bond than Sherlock Holmes, with an eye for a curvaceous figure and a dogged determination when it comes to survival. He is quite the man of action. Taking a backseat are his usual sidekicks, Paula Dane and Tinker as Blake unravels the mystery on his own. Danger’s Child involves a dead body in a bathtub, Charmian’s daughter, espionage, sex, and peril at a waterfall. Hot blondes, lost loves and a mystery with a clever solution make this Sexton Blake adventure a page-turning delight. Written from Blake’s viewpoint, the first-person narrative gave the book a different feel than the third-person Sexton Blake stories I was accustomed to. My reading of Danger’s Child happened to coincide with a visit to Barnes & Noble booksellers where I perused the latest hardcover releases. Every book I examined was destined to become a remainder in about a year. I found books by James Patterson and Newt Gingrich about as interesting as a bowl of cold oatmeal. I’ll take any Sexton Blake novel over James Patterson any day of the week. I’m not saying that Danger’s Child is a masterpiece, but I am saying that it’s pretty damn good. Note: for collector’s this is Sexton Blake # 487.

NOTE: Mark Hodder, author of the excellent steampunk novel, The Strange Affair of Spring Heeled Jack, is an expert on Sexton Blake and maintains an excellent website that you CAN VISIT BY CLICKING HERE! Hodder’s viewpoint on Danger’s Child is much different than mine. Hodder’s website is loaded with reviews, cover scans and historical facts. Check it out!
Posted by Thomas McNulty at 2:31 PM