Review: Writers of the Future Volume 30 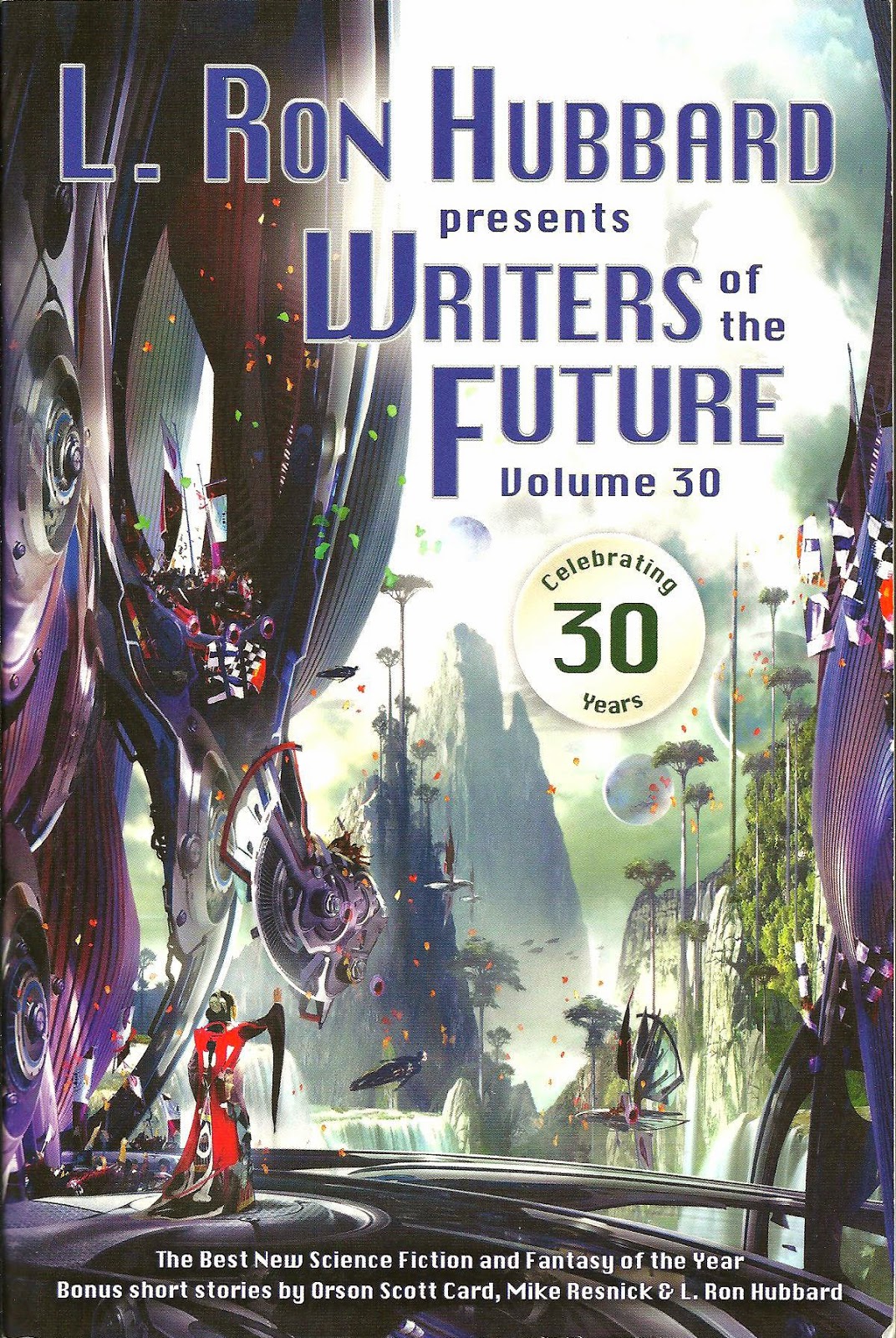 This year’s historic 30th anniversary anthology also marks the 25th anniversary of the Illustrators of the Future contest. I was a guest at the awards ceremony in Hollywood and met the talented creators of Writers of the Future Volume 30. In all of thirty years each anthology has become a collector’s item, and this year the anthology was published in a larger paperback format and featuring full-color illustrations. It’s a beautiful book, and the stories and illustrations are all top-notch creations.

Megan E. O’Keefe’s “Another Range of Mountains” (illustrated by Sarah Webb) kicks the book into over-drive with this splendid tale that is part mystery, with a dash of fantasy as Lacra uses her artistic skills to craft a resolution to a serious problem. The writing is imagistic, thoughtful and the characters are compelling. I’ll be watching for more stories from Megan E. O’Keefe. The second story is Paul Eckhart’s “Shifter” (illustrated by Michael Talbot) wherein a lost brother is re-discovered in the most unusual way. Eckhart demonstrates a strong range, from colloquial exposition to quality suspense, and “Shifter” has some cool plot twists that I guarantee will keep you reading the story. “Beneath the Surface of Two Kills” by Shauna O’Meara (illustrated by Cassandre Bolan) is a story about a hunter who makes a decision. The nature of that decision is to be discovered by each reader. Stark and memorable, “Beneath the Surface of Two Kills” is one of those tales that stays with you after you read it.

“Animal” by Terry Madden (illustrated by Seonhee Lim) tackles a timely theme about our relationship with other species in a thoughtful and superbly realized tale that I enjoyed immensely. “Rainbows for Other Days” by C. Stuart Hardwick (illustrated by Andrew Sonea) is a poignant story about a ranger who encounters a young girl who wants to be free, and the hint of a radioactive world lingers at the periphery of this mesmerizing story. “Giants at the End of the World” by Leena Likitalo (illustrated by Trevor Smith) is a haunting fable-like tale that might have sprung from the fertile mind of Hans Christian Anderson or the Brothers Grimm, but since they’re no longer around we are fortunate to have Leena Likitalo here to capture on paper such thought-provoking tales.

We are now at the halfway point, and included in WOTF 30 you’ll find a cool zombie tale by Orson Scott Card, a pulp era classic by L. Ron Hubbard titled “Beyond All Weapons,” in addition to a short essay by Hubbard titled “Artistic Presentation.” Hubbard manages to strike at the heart of the matter in a few pages with his concise but accurate view on what it takes to successfully create. Study this essay, because you’ll learn much from it. An essay by Dave Wolverton and a look back at WOTF over the decades by Robert Silverberg take us only halfway home, and there’s so much more to come. “The Clouds in Her Eyes” by Liz Colter (illustrated by Kirbi Fagan) is about a girl named Amba in a drought, and what she does next is rendered with acute craftsmanship by Colter. “What Moves the Sun and Other Stars” by K. C. Norton is about love, and a love without boundaries. One might say that this is science fiction with a heart. “Long Jump” by Oleg Kazantsev (illustrated by Adam Brewster) features a classic “hook” opening line. A hook, of course, being a line so compelling that readers have no choice but to read on to find out what happens next. I won’t repeat it here, because I’m in favor of your discovering it for the first time yourself. It’s a great story. “These Walls of Despair” by Anaea Lay (illustrated by Bernardo Moto) offers such excellence in its structure that I read it twice. A science fiction tale only by categorization, because at its heart this one is about people. The best stories always are.

We’ve turned a corner and we’re racing toward the finish. A story by Mike Resnick, “Robots Don’t Cry” and an essay on art by Val Lakey Lindahn lead us toward the last three stories. “The Shaadi Exile” by Amanda Forrest (illustrated by Vincent-Michael Coviello) is about a woman, Daliya, who creates memory boxes as gifts for newlyweds. A compelling tale of love and ideals, told with expertise. “The Pushbike Legion” by Timothy Jordan (illustrated by Cassadre Bolan) is about Aleck and his bicycle, and quickly transforms into a nifty adventure tale. The final story, “Memories Bleed Beneath the Mask” by Randy Henderson (illustrated by Vanessa Golitz) is a beautifully written tale about loss and love,  and when I finished it I wanted more. The section of color artwork, and the overall quality of each of these great tales ensures that Writers of the Future 30 is an instant collector’s item. Each story was inspiring, unique and written from the heart. I was personally inspired by these stories, and I’m looking forward to reading additional stories by all of the authors. Kudos!

ORDER A COPY HERE!
Posted by Thomas McNulty at 7:52 PM

Email ThisBlogThis!Share to TwitterShare to FacebookShare to Pinterest
Labels: Fantasy, Science Fiction, Writers of the Future