Peace at Any Price by Chap O’Keefe 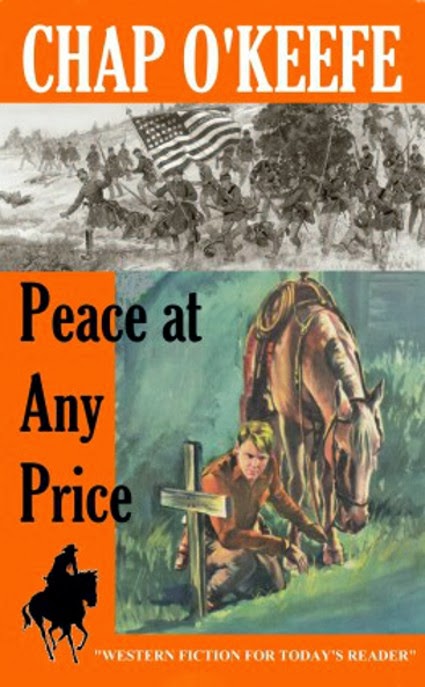 Veteran western writer Chap O’Keefe, (AKA Keith Chapman) was kind enough to share with me his latest e-book, now available on Amazon. I’m glad he did because Peace at Any Price is an intelligent and finely wrought western adventure. Told in the traditional pulp style with chapter titles (and loads of suspense, that builds slowly), the tale begins one black night at the Double H ranch where Jim Hunter and Matt Harrison are worried about raiders. Things take a turn for the worse straight-up when their hand, Walter Burridge, is murdered and their ranch burned. Jim, having spotted one of the culprits, a hook-nosed man, vowed not to forget the glimpse he had of Hook-Nose. Although they had managed to save the house from burning to the ground, they hadn’t been able to save old Walt, their loyal friend. Reconnoitering in Brownsville, Matt decides to enlist in the War Between the States, and on the Union side. Jim is crushed, and he soon meets Lena-Marie Baptiste, a saloon gal who will play a vital role in the coming chapters. After the war, Jim’s difficulties send him packing. This a character-driven story, superbly realized, and highly entertaining. O’Keefe is obviously skilled at creating sympathetic characters, and Jim Hunter is someone that readers will relate to. There’s plenty of action along the way, and enough surprises in the plot to keep you turning the pages. I want to mention here that while this western might be referred to as a “traditional western,” that doesn’t mean you’ll guess what happens, and I guarantee you’ll be satisfied by the outcome. The plentiful action and fascinating characters had me whipping through the book like a man in a hurricane – which reminds me – the story is near epic and does indeed involve a hurricane. Chap O’Keefe is a hell of a writer, and I admire both his talent as a wordsmith and his voluminous imagination. Peace at Any Price is recommended for fans of westerns, but of greater importance, it’s recommended for readers that love a great story told well. The book includes an Afterword, an essay titled “The Heart of a Western,” which I enjoyed as much as the novel. Peace at Any Price is available on Amazon and I recommend you download it and saddle up with some great fiction. I’ll be reviewing additional books by Chap O’Keefe in the coming months.
CLICKHERE TO ORDER Peace at Any Price!
Posted by Thomas McNulty at 6:23 PM