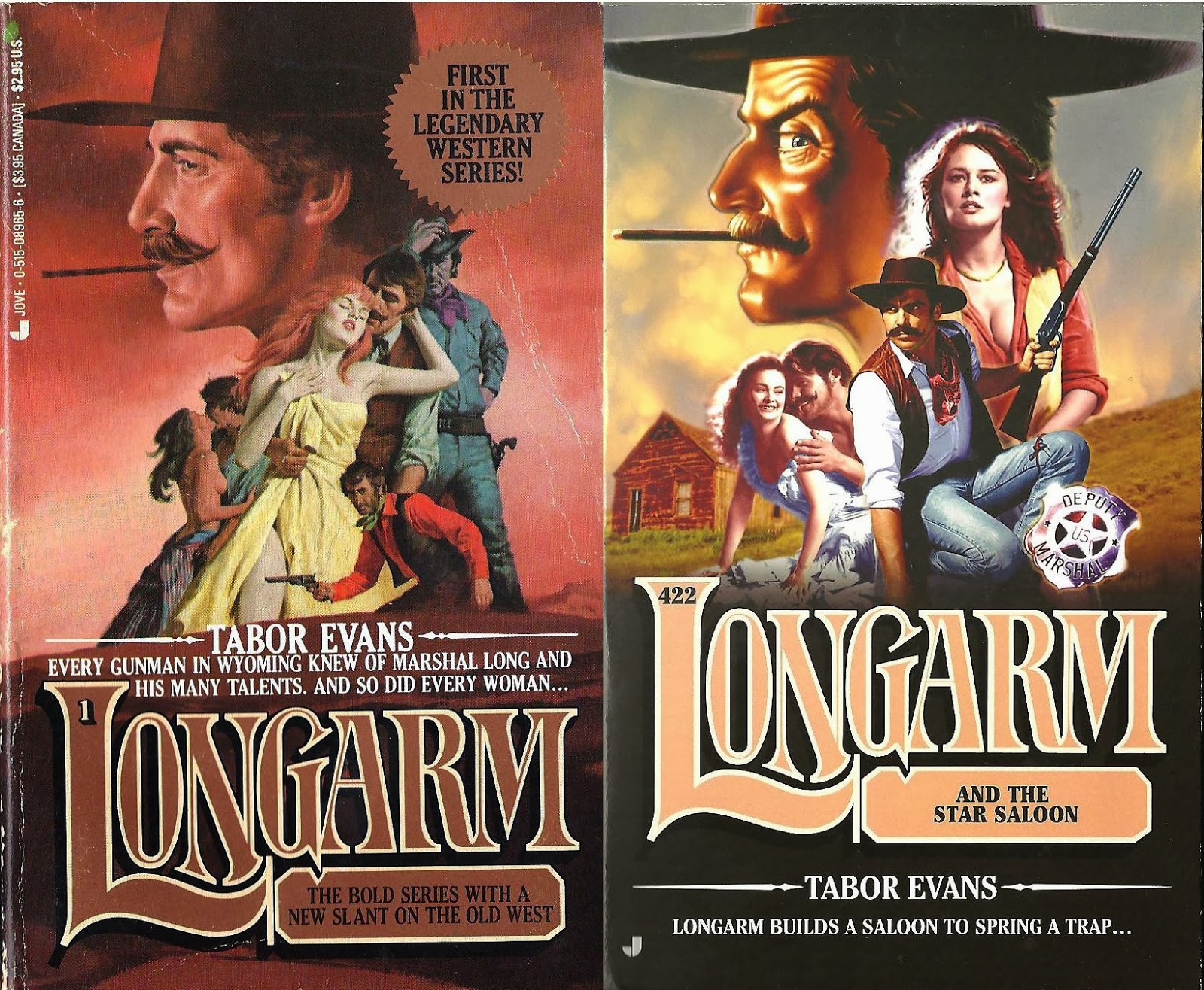 Here’s a winner that dates back to 1978. Ah, those were the days! Along with The Gunsmith and Slocum, I do believe Longarm is the longest running western series in history. Created and written by the late Lou Cameron but published under the pseudonym Tabor Evans, the Longarm books were “Adult Westerns” for geeky bookhounds like me. This is the series that gave us ample doses of what we red-blooded young men really wanted: namely, saucy sex, blazing six-shooters, an occasional knock-down-drag-‘em-out fistfight, more sex, and more gunfights. The good guys always won, the bad guys got what they deserved, and then some; and the women were all ready to frolic. What more do you want from a western?

Lou Cameron wrote many, many books, and I have some of the westerns he published under his own name in addition to the Longarm series. In this very first adventure Cameron set the tone and created the ingredients that has kept this series an ongoing best-selling title for Jove Books. Described as a “lean,, muscular giant with the body of a young athlete and a lived-in face,” on page one, Longarm is just shy of forty. He’s a Deputy U.S. Marshal and favors a Colt model T .44-40 with a five inch barrel and the front sight filed off. In his first outing he is sent to Crooked Lance to pick-up Cotton Younger, cousin of Jesse James. But someone doesn’t want Younger to face justice. The action heats up fairly quickly, including a tryst with a recent widow named Mabel Hanks. Cameron packs the book with authentic details, descriptive passages and appropriate dialogue. This first book clocks in at 272 pages, whereas these days the series averages about 180 pages per book.

Lou Cameron wrote approximately fifty of the 422 books in the series. Dozens of writers have contributed to Longarm’s success, but without recognition. Unlike Don Pendleton’s Executioner series where each writer is acknowledged on the copyright page, the Jove westerns are all ghost written. After looking back at Longarm # 1, I decided to get myself up-to-date and bought the newest title, # 422, Longarm and the Star Saloon, just to see how it compares to the original. I hasten to add that I routinely purchase Longarm, The Gunsmith and Slocum paperbacks at least twice a year. I don’t buy every title that comes out, but I average about three or four of each title a year, just because they are all fun and easy to read.

I have no idea who wrote Longarm and the Star Saloon, but it has the best opening line I’ve encountered in quite a few years: “Pardon me for sayin’ this, ma’am, but you got big tits.” Yep, that’s the line. If you’re offended, you’re visiting the wrong blog. Longarm books are not politically correct. I’ll stop reading them if that happens. In this one, the ole boy is asked to help Helen Morrow (the object of Longarm’s perceptive comment), a madam operating several bordellos. These days the chapters are shorter and the writing seems perfunctory, but the books are still entertaining. Longarm and the Star Saloon moves along briskly. The sex is a tad more explicit than in the first one, but we never really had to guess what was happening did we? I thoroughly enjoyed Longarm and the Star Saloon. The short chapters make it as fast and easy to handle as one of Custis Long’s women. There’s a corrupt sheriff and mysterious threatening letters, and some solid action.

Of course, there’s a noticeable difference in the style from the original, but the series endures because the writers have a great blueprint to work from, all thanks to Lou Cameron. And some of the details, like that Colt model T .44-40  with the front sight filed off, are long gone, replaced by the traditional Colt .45. Since I’m in comparison mode, the first line of the first book is: “One gray Monday morning it was trying to rain in Denver.” Bluntly stated, the primary difference being that Longarm # 1 is a complete, full-length novel, whereas the books these days are novelettes heavy on action and sex. Where Lou Cameron would have built a scene meticulously, today the writers literally “Cut to the chase.” This is not an attack on their talent - I like the books and I liked Longarm and the Star Saloon – but it’s also clear that certain editorial directives are in place. The writers appear to be giving the editors what they want as much as they are giving the audience what they want. I’m okay with that.

Interestingly enough, while the series remains popular, I couldn’t find any websites devoted to the books. That strikes me as odd, especially when you consider how fanatical some of the fans (and even the writers) are over Mack Bolan, that other competing series. Oh, well. As long as Jove continues to publish Longarm books then I’ll continue to buy them now and again. Meanwhile, if you’re a fan check out Longarm and the Star Saloon. You won’t be disappointed.
Posted by Thomas McNulty at 10:29 AM