Scroll to the bottom of this post to learn about the new edition!


We didn’t know it at the time, but L. Ron Hubbard’s Battlefield Earth was at the forefront of what is now being called the “New Pulp” literary movement. Battlefield Earth marked Hubbard’s return to popular fiction after a thirty year hiatus. During this period, the demand for Hubbard’s fiction never abated. To satisfy that demand, there were several reprints of his classic fiction, notably Ole Doc Methuselah by DAW books in 1970; and that same year Death’s Deputy from Leisure Books and Fear and The Ultimate Adventure as a double-novel paperback from Berkley. In 1975 Major Books republished The Kingslayer as Seven Steps to the Arbiter; and Popular Library reprinted Fear alongside Typewriter in the Sky in 1977. Hubbard had never gone out of style.

All the same, fans were eager for new fiction. Battlefield Earth marked Hubbard’s return to the world of popular fiction, and I recall with clarity the excitement I felt when I first read the book. I was flat broke and waited for that first paperback edition. Battlefield Earth never pretends to be anything other than what it is; a grand adventure story in the tradition of the stories Hubbard himself wrote during the Golden Age of the 30s and 40s. He dedicated Battlefield Earth to 87 fellow writers from the Golden Age, and introduced the book with an essay that clarified his thoughts on writing the novel.

In Hubbard’s words, Battlefield Earth is a work of “pure science fiction.” But he also makes it clear when he added that “To show that science fiction is not science fiction because of a particular kind of plot, this novel contains practically every type of story there is – detective, spy, adventure, western, love, air war, you name it.” Of course, this homage to genres is seamless, and Battlefield Earth kicks into high gear starting on page one. The publication of Battlefield Earth fulfilled a long held wish of mine to see LRH publish a new novel since I had first read that DAW paperback of Ole Doc Methuselah. All of these years later and readers are re-discovering Hubbard’s fiction through the Galaxy Press reprint series; and part of the celebration will include a new edition of Battlefield Earth sporting a Frank Frazetta cover. There will also be a comic book/graphic novel adaptation, all of which I was privileged to get a sneak peek of at last summer’s American Library Association conference in Chicago.

But what of the novel itself? What makes this book so appealing? First and foremost, Battlefield Earth is an adventure story. Perhaps we can even refer to it by that now archaic term “boy’s adventure story.” Battlefield Earth is subtitled “A Saga of the Year 3000” and “saga” aptly describes Jonnie Goodboy Tyler’s battle against Terl and all of that alien race known as Psychlos. Jonnie becomes the focal point in mankind’s effort to survive the evil mechanizations of the Psychlos, which puts Jonnie and his allies in constant jeopardy. All of the elements of popular adventure fiction that Hubbard had mastered in the 30s and 40s are evident on each chapter. Tyler has a horse named Windsplitter, a true love named Chrissie, and later, allies such as Robert the Fox, Angus Mactavish and many others. Their task is to defeat Terl and the Psychlos and save earth.

One of the elements that makes Battlefield Earth enjoyable is the unapologetic sense of fun and adventure that Hubbard puts into the writing. Jonnie Goodboy Tyler is a typical Hubbard hero, perhaps the best of them all. Tyler prefers to think his way through a problem carefully before taking action. He accumulates knowledge like a sponge, and at every turn represents the American idealism of hard work, fair play and common decency. He doesn’t let his mistakes crush him; rather, Tyler literally dusts himself off and lives to fight another day.

Hubbard was consistent throughout his career in creating characters that exemplified and celebrated the Common Man. Of course, his point being that none of us are common at all, as long as we’re willing to put a little elbow grease into our efforts. Looking at his classic stories such as Sabotage in the Sky, Trouble on His Wings, The Sky Devil, Black Towers to Danger or Twenty Fathoms Down, we are greeted by heroes that offer unabashed boyish enthusiasm and a willingness to stand against the tide of evil. So Jonnie Goodboy Tyler joins the ranks of fictional heroes that readers of each generation will enjoy time and again.

As a writer of adventure tales, L. Ron Hubbard’s fiction appeals to readers who love to wander down new trails, and who love the prospect of exploring wondrous new lands. He always expressed the assurance of our Manifest Destiny, instilling in his characters the very essence of the American personality. Cut from the fabric of modern experience, his characters are the epitome of our dreams and aspirations, and are embodied perfectly in Battlefield Earth as the life and legend of Jonnie Goodboy Tyler. 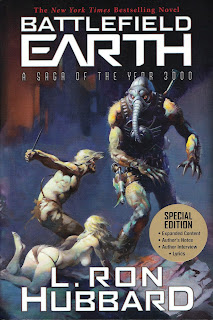 Posted by Thomas McNulty at 7:25 PM