The Wood by Guy N. Smith 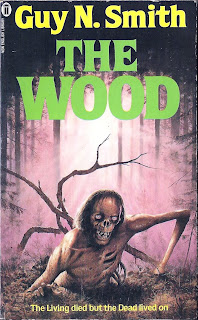 There are horror writers who take themselves oh so seriously, and then there are horror writers who crank out the pages with the intensity of a pulp writer, and have fun doing it. Guy N. Smith falls into the latter category, and that’s why he is so enjoyable to read. Smith knows what his readers want, and he gives it to them in proper dosages. His novels are not overlong but they are heavy with action, mood, thrills, plot twists and energy. They are also chilling. The Wood is a 1985 scream-fest that is wickedly fun to read. This one gets off to a fast start: During World War II Bertie Hass, a Luftwaffe pilot, parachutes from his crippled airplane over England and lands in a place called Droy Wood. He doesn’t know it, but he’ll never see Germany again. Droy Wood is haunted, and Hass becomes part of an ancient and sinister tableau. Cut to modern times: Carol Embleton is pissed at her boyfriend, Andy Dark, and walks home from the discotheque, passing perilously close to Droy Wood. Carol accepts a ride from a stranger as she passes Droy Wood, and suddenly she’s been stripped naked and raped. Fearing for her life, she runs naked into Droy Wood, pursued by James Foster, the rapist. Later Andy and the police organize a search party and everyone slips into Droy Wood looking for Carol, who remains naked, frightened but most decidedly not alone. In addition to Bertie Hass, there are strange creatures in the cold bog and an ancient army preparing for battle. Droy Wood is one spooky damn place. There are multiple characters in this book, and many of them come to a gruesome end. Guy N. Smith lives in England and has published dozens of books, all of them good. The Wood is a typical example of his work, and I mean that in a positive way. I much prefer Smith over certain horror writers who write thousand page tomes that are ultimately unreadable. Smith provides horror in just the right percentages. Watch this blog for additional reviews of Guy N. Smith’s books in the near future.
Posted by Thomas McNulty at 5:36 PM