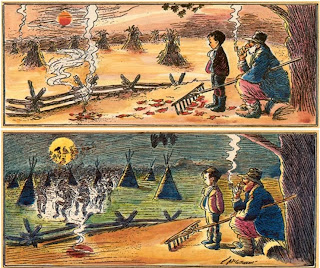 John T. McCutcheon's Indian Summer was first published in the Chicago Tribune on September 30, 1907. It was reprinted nearly yearly until 1992 when concerns of it being “political incorrect” prompted it’s removal. When asked about his ever-popular cartoon, McCutcheon replied: “There was, in fact, little on my young horizon in the middle '70s beyond corn and Indian traditions," he recalled later. "It required only a small effort of the imagination to see spears and tossing feathers in the tasseled stalks, tepees through the smoky haze. .” Inspired by his youth in Indiana in the 1870s, the cartoon was a favorite of mine as a child. I’m not aware that the Chicago Tribune prints this cartoon very often, although they do receive a lot of requests for it. Here it is along with McCutcheon’s original text. Enjoy!
*****
Yep, sonny this is sure enough Injun summer. Don't know what that is, I reckon, do you? Well, that's when all the homesick Injuns come back to play; You know, a long time ago, long afore yer granddaddy was born even, there used to be heaps of Injuns around here—thousands—millions, I reckon, far as that's concerned. Reg'lar sure 'nough Injuns—none o' yer cigar store Injuns, not much. They wuz all around here—right here where you're standin'. Don't be skeered—hain't none around here now, leastways no live ones. They been gone this many a year. They all went away and died, so they ain't no more left.

But every year, 'long about now, they all come back, leastways their sperrits do. They're here now. You can see 'em off across the fields. Look real hard. See that kind o' hazy misty look out yonder? Well, them's Injuns—Injun sperrits marchin' along an' dancin' in the sunlight. That's what makes that kind o' haze that's everywhere—it's jest the sperrits of the Injuns all come back. They're all around us now. See off yonder; see them tepees? They kind o' look like corn shocks from here, but them's Injun tents, sure as you're a foot high. See 'em now? Sure, I knowed you could. Smell that smoky sort o' smell in the air? That's the campfires a-burnin' and their pipes a-goin'.

Lots o' people say it's just leaves burnin', but it ain't. It's the campfires, an' th' Injuns are hoppin' 'round 'em t'beat the old Harry. You jest come out here tonight when the moon is hangin' over the hill off yonder an' the harvest fields is all swimmin' in the moonlight, an' you can see the Injuns and the tepees jest as plain as kin be. You can, eh? I knowed you would after a little while. Jever notice how the leaves turn red 'bout this time o' year? That's jest another sign o' redskins. That's when an old Injun sperrit gits tired dancin' an' goes up an' squats on a leaf t'rest. Why I kin hear 'em rustlin' an' whisper in' an' creepin' 'round among the leaves all the time; an' ever' once'n a while a leaf gives way under some fat old Injun ghost and comes floatin' down to the ground. See—here's one now. See how red it is? That's the war paint rubbed off'n an Injun ghost, sure's you're born. Purty soon all the Injuns'll go marchin' away agin, back to the happy huntin' ground, but next year you'll see 'em troopin' back—th' sky jest hazy with 'em and their campfires smolderin' away jest like they are now. 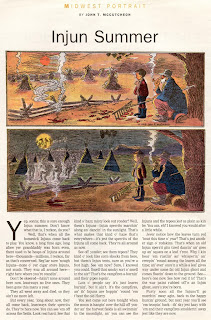 Posted by Thomas McNulty at 5:45 PM