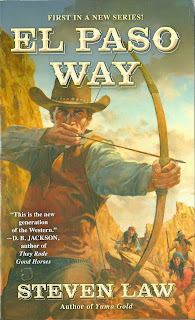 I picked this one up at Book World in Minocqua, Wisconsin. Book World always has a better selection of westerns than Barnes & Noble. The cover blurb calls this the first in a new series, so I gave it a shot and wasn’t disappointed. El Paso Way is a wholly original and exciting story, with a fresh plot and exciting characters. The cover painting by Dennis Lyall is a special treat and matches the interior action. Kudos to Berkley Books for using original painted covers on their paperbacks. According to the author bio this is Steven Law’s fourth novel. I intend on backtracking and finding the others because El Paso Way had me hooked from page one. Here’s the unique set-up: Enrique Osorio witnesses the murder of his family at the hands of Antonio Valdar, a bad-ass known as the Demon Warrior. Osorio means to have his vengeance against Valdar. Soon he meets a Chinese migrant worker named Pang Lo who happens to be proficient in Kung-Fu and and agrees to help Enrique find his sister who was kidnapped by Valdar. Osorio has become proficient with a bow and arrow, and together these two sort of stumble along on their vengeance quest. What makes this work is that Osorio and Pang Lo compliment each other’s strengths and weaknesses. Neither character are traditional heroes, which I found refreshing, and yet they possess those admirable qualities necessary for a western story to engage its readers. Namely, a sense that goodness and justice must somehow prevail. Steven Law’s craftsmanship makes their plight believable, even memorable. I’m recommending El Paso Way as a must-have for western fans and lovers of quality adventure fiction in general. El Paso Way is  a fine tale and won’t disappoint.
You can visit Steven Law’s website by clicking HERE!
Posted by Thomas McNulty at 10:45 AM