The Black Arts by Richard Cavendish 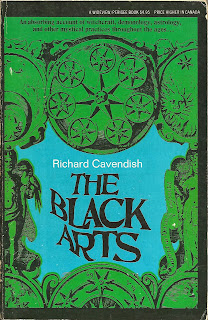 Here’s a flashback some of you have been waiting for a long, long time. 1967, the Summer of Love, as they called it, when the counter-culture movement was in full swing; when Bobby and Martin were still alive; when we listened to the Beatles, The Doors, The Rolling Stones; when we turned on, tripped out, and broke on through to the other side. This was the era of experimentation, for better or worse; when it was un-cool to make fun of people that practiced a religion other than the one your grandparents knew. Hari Krisha, Dali Lama, Alan Watts were all the rage. Although Gerald Gardner is credited with writing the first Wiccan history, Witchcraft Today (1954) it was really Gavin and Yvonne Frost who popularized the movement in the late 60s and early 70s. More about Gavin and Yvonne in a separate post. The cultural rebellion of the 60s opened the floodgates and thus made The Black Arts by Richard Cavendish a legitimate purchase at your local bookstore. Gone were the days when such literature could only be purchased in specialty shops. Isaac Bashevis Singer reviewed  The Black Arts for Book Week and stated in his praise: “Works such as Cavendish’s are a reminder that we are living in an era of amnesia. We have forgotten those vital truths that man once knew and by whose strength he lived.” The Black Arts is among the best concise and readable histories of the occult sciences that I have encountered. The sections include overviews on Numerology, Alchemy, the Cabala and the Names of Power, Astrology, rituals, Satanic worship, the origins of witchcraft, grimoires, and the Black Mass. Here you’ll learn about the Lords of Darkness, Tarot divination and much more. The Black Arts was a bestseller for years and went through at least ten printings. I don’t know if it’s still in print, and it wouldn’t surprise me to discover that it is. Recommended for the non-judgmental reader, The Black Arts by Richard Cavendish is a treasure chest of ancient history.
Posted by Thomas McNulty at 4:54 PM